Tens of thousands of labourers flock to Kathmandu from all parts of Nepal and beyond, driven by opportunities to earn 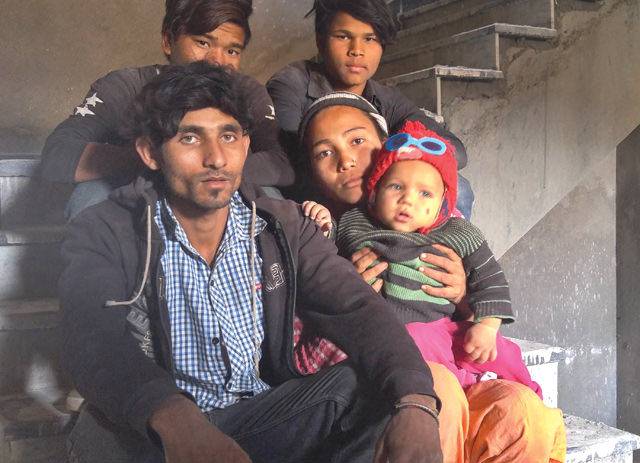 In an office in Hotel Kutumba, Raju BK bends over a plate of dal bhat, his infant son perched on one knee. A couple of colleagues are scattered around the room intently scooping up handfuls of food from plates on their laps. Raju’s bhauju is crouched on the floor cooking over an open flame and clothes are drying on a short line strung along a wall.

Hotel Kutumba in Jhamsikhel is about six months away from opening. Raju, 25, has been living in this bare, concrete room, about 3m x 3m for a year. His wife and year-old son joined him six months ago.

Scattered throughout the six-storey building are other groups of workers, about 20 in total. Raju’s family is from Bardia, but other groups come from Saptari, Sunsari, Sindhuli, Kailali and even India to work in Kathmandu's construction industry.

They will work, eat and sleep together in this concrete shell for months, then move down the road to the next project.

Some workers, like Raju, have been toiling and living in these grey structures for a decade or more to send money to families, and only making quick visits home for holidays.
While the struggle of Nepali workers in the Gulf or Malaysia gets much attention, the plight of Nepalis working in Nepal seldom makes it to the news.

Raju is the leader of the ‘Bardia Group’, which includes his wife Geeta, younger brother Ganesh and two teenagers. He earns Rs500 for an eight-hour day plus overtime, and the group works 7 days a week. Geeta and other women receive about two-thirds of men’s salary for the same work.

Raju says he is better off doing construction than he was working in the garment industry in Delhi, where he toiled 12 hours a day for just Indian Rs300.

He found this work by chance. While staying in a hotel in Thamel waiting for a work visa to a Gulf country 10 years ago, he ran out of money. Taking a friend’s advice, he worked on a building site to cover his costs. The visa never came, but he has been working ever since.

“It’s tedious but the income is good,” Raju says, standing in a bare corner room with gaping holes where the windows will be, among bags of cement and a pile of sand on the floor. “I want to go back home but I can’t make this kind of money there,” he says

Raju’s wife Geeta, 22, also works in the building, mainly cleaning. “I feel better in the village, my whole family is there," she says, "here I have to clean floors and carry bricks for my husband’s work."

In a dim, corner room, one storey below, Sunita Urao is sitting on the concrete floor feeding her six-day-old daughter. A small wood fire burning in a shallow, metal dish next to her provides extra warmth.

Her husband Mahesh says they wanted to have the baby at his home in India, across the border from Sunsari district, but it takes three days to travel there from Kathmandu. Instead the baby was delivered in the maternity hospital in Thapathali.

Asked how they feel about living in the half-finished building with the child Mahesh answers: “We are happy, we will have to be here for five or six more months.” 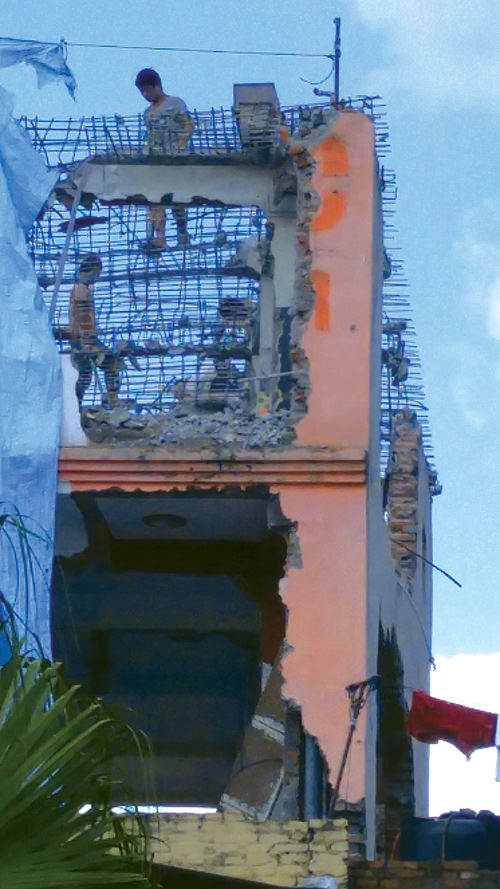 Up on the roof shovelling sand, Rita Urao, 28, says there is work at home in Sunsari but they don’t get paid monthly, unlike here. “I can save some money but back home you finish what you earn. It is difficult, but what choice do us poor people have?"

Standing on the same roof a few days later, owner Sanjaya Parajuli points out the location of the hotel’s future beer garden, on this clear autumn afternoon gifted with a view of gleaming, snow-topped Himalayan peaks.

He has been building the 22-room boutique hotel on family land for three years, including an interruption after the earthquake.

Parajuli thinks the location is an advantage, close to the UN and offices of international non-profits. Rooms here will cost $75-100. He says he’s happy with the job the workers are doing, although, because labour is so scarce, occasionally they get transferred to other sites.

Asked how long they plan to keep working in the capital, Raju’s wife Geeta says: “We have the kids to send to school: I think we will stay a little longer.” 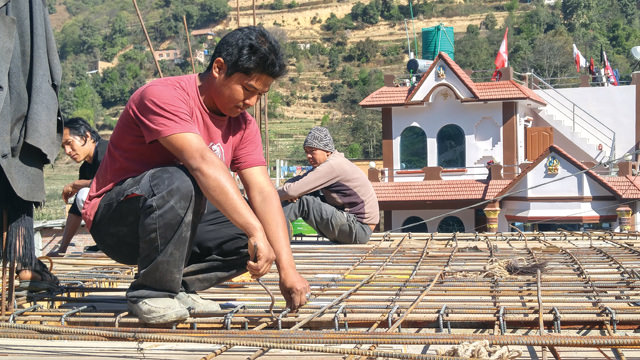 Ten years ago Rajan Magar (above) was hefting loads of sand and bricks at building sites in a doko slung on his forehead. Today he is the boss of a handful of labourers who construct the houses that he has been hired to build. Magar, 28, says moving up from labourer to contractor is all about dedication. “I worked very very hard to get to this point. If you’re willing to work this hard then definitely you’ll succeed.”

He also had a headstart: his father was a builder in Dolakha, where he grew up in “very humble circumstances”. Magar says the amount he makes on each job depends on how quickly his team works, and how many ‘extras’ the homeowner requires, like the ornate columns that flank the front doors of many houses. 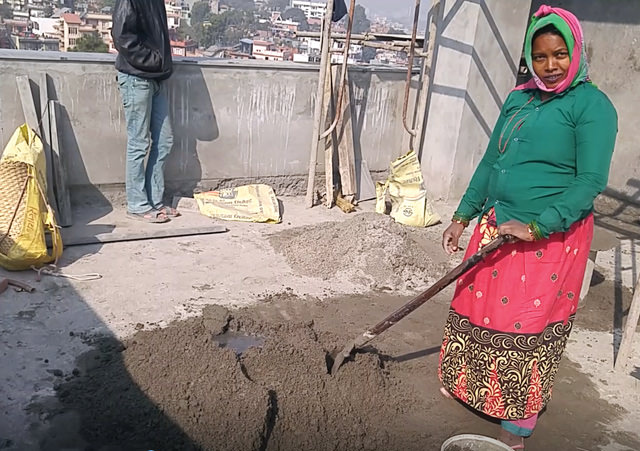 Rita Urao says the advantage of working in Kathmandu so she can save some money.

He pays his workers Rs1,200 per day, Rs1,500 to the skilled ones. They work 10 hours minus 1 hour for lunch and 30 minutes for tea. Those conditions are a combination of union rules and terms adopted by a group of about two dozen builders operating in Suryabinayak Municipality.

“Workers are hard to find but I have seven or eight people who are continuously with me,” he says. They are from Sindhuli, Rasuwa and Sindhupalchok. If necessary, Magar says, he can ‘borrow’ workers from fellow contractors, and vice-versa. 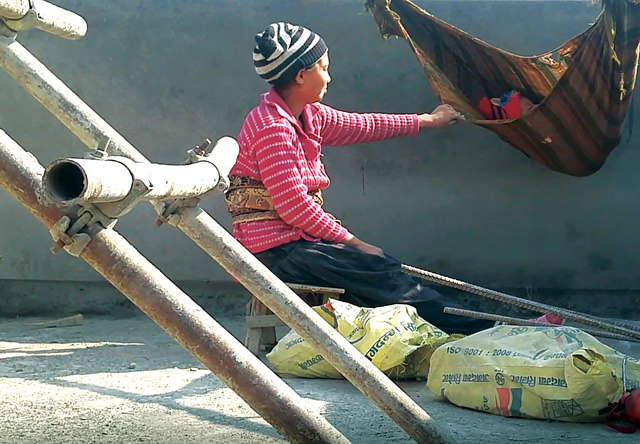 Geeta rocks Roman to sleep in his roof-top bed.

A former colleague notes that Magar throws a party for his workers after each job is finished, suggesting that is one reason why the young man is prospering.

“I’m doing well,” the builder agrees. “I’m able to send my child to a good school.” His plans include investing future profits in land speculation.

Migration in a microcosm, Sebastian Wolligandt

Everything changes, everything stays the same
PRASHANT JHA

Byakul Pathak in Nepal Samacharpatra, 18 September
Wow! It namely likewise fine treatise about JavaScript, babyliss pro curler I dissimilar Your post doesn't acquaint any sense. ray ban outlet uk if information are defined surrounded sketches one can effortlessly be versed with these. hollister sale I think a visualized exhibit can be better subsequently simply a effortless text, chanel espadrilles for sale that why it gives you improved quality. getnjloan.com Can you amuse forward me the code for this script alternatively interest distinguish me surrounded detail among relation apt this script? Vivienne Westwood online get a babyliss perfect curl Very soon this network sheet longing be outstanding among all blog viewers, isabel marant sneakers saleI too prefer Flash,