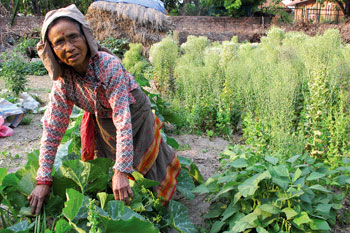 KUNDA DIXIT
CLEAN FARMING: Bhinmaya Awale is one of those rare Lalitpur farmers who doesn’t believe in chemical pesticides. “They are expensive, harmful and the sprayed vegetables don’t taste good,” she says.
Kathmandu Valley farmers are spraying increasing amounts of pesticides, and not wearing protective gear even though they know its harmful effects, a survey has shown

Research involving 85 farmers in the Tikathali area of Lalitpur, where farmers have traditionally grown vegetables for the capital’s market showed that nearly 90 per cent of farmers used chemical pesticides, but only half of them used protective gear while spraying. Some farmers admitted they don’t use pesticides on vegetables they grow for their own consumption, but spray crops they sell in the market. The most commonly used pesticide is the organophosphate metacid, which is actually banned in this country. Sixty-five per cent of farmers had no idea about dosage, and different types of pesticides.

“Vegetables that are sprayed with pesticides have a better texture than organic ones and consumers prefer them,” says Sojan Karmacharya, a 29-year-old Tikathali commercial farmer who has a BBS degree. “You have to address the demand side to control pesticide use, by educating consumers.”   Organic vegetables are more expensive than those that are protected with chemical pesticides, Karmacharya explains, and the vendors prefer sprayed vegetables since customers are so price-conscious.   Ratna Prajapati, 35, agrees. “It is impossible to recover cost, let alone make a profit without use of pesticides,” he says.

The survey also found evidence that commercial farmers who use chemical fertilisers and pesticides often pass them off as organic.  Of the farmers surveyed, 98 per cent said they knew pesticide use was bad both for themselves and consumers, but most of them prepared pesticides without gloves or masks.

Almost 60 per cent of farmers considered wind direction while spraying chemicals, and 75 per cent had no idea about pesticide residue. Only one in ten farmers interviewed had ever heard of IPM (Integrated Pest Management) for chemical-free pest control. Most farmers were neither aware of the toxicity labels on pesticide containers, nor understood their meaning.

Only four in 10 farmers took a shower after handling pesticides, and 60 per cent used contaminated utensils for kitchen gardens and livestock feeding. More than half disposed pesticide containers in rivers or public ponds.

Although awareness about the health hazards of pesticides is high, very few farmers in the study were able or willing to stop using them. Pesticides are still perceived as medicines, and most farmers refer to them as “okhati”. The abundance and easy reach of the chemicals has also led to pesticide ingestion being a major method of suicides.   Ruku Sapkota was married when she was 14, and her husband’s family gave her pesticide to spread on the family field. Not knowing how poisonous it was, she handled it without gloves or masks and developed serious rashes. Now, at 40, she is still allergic to the chemicals. 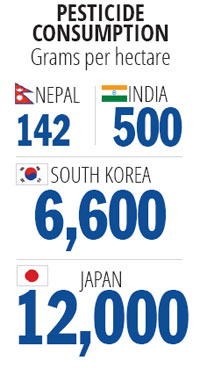 Meanwhile, Bhinmaya Awale (pic, above) is one Lalitpur farmer who has shunned chemical pesticides completely. “First of all, the chemicals are poisonous, they are expensive, and the vegetables don’t taste as good,” says Bhinmaya, who carefully kills insects one-by-one if they invade her radish or mustard farm.

She is happy that organic vegetables fetch a higher price, but says many farmers lie about not using pesticides.   The average consumption of pesticides in Nepal is still low compared to other countries (see chart) but the spread of commercial farming has meant that per capita pesticide use in Nepal is increasing sharply. Nepal’s annual imports of various pesticides is over 100 tons, and a recent survey by the Department of Food Technology and Quality Control found 12 per cent of food samples, mostly vegetables, to be contaminated with banned pesticides. Nepal has a stockpile of 74 tons of date-expired pesticides, but there are no plans for disposal.

Pesticides, besides being highly toxic, do not differentiate between good bugs and bad bugs and indiscriminately kill all species of insects and worms in a farm. The compounds are highly stable and can stay in the soil and the food chain for decades, often in the meat of animals.

Groups of pesticides may result in subtle, long-term harm to human health and induce diseases like cancers, Parkinson’s disease, birth defects, and even behavioural problems.

** Advocacy for safer use of chemical pesticides

** Training for farmers on protective gear

** Awareness of pesticide residue and toxicity through mass media

** Regulation and control of pesticide imports

Pesticides most commonly used in Nepal, most are extremely toxic to humans unless properly handled:

You are what you eat, Katy Elliot

Is there poison in your neighbourhood?, Alok Tumbahangphey

Seeking, but not getting refuge

In the absence of a law protecting refugee rights, Tibetans in Nepal have to legal safeguards
ANURAG ACHARYA

Worth the paper it is written on

It's getting difficult to tell who is stabbing whom in the back within the Maoist party anymore.

In search of new avenues

The illusion of a loss-proof banking sector is slowing breaking
PRABHAT BHATTARAI
Wow! It namely likewise fine treatise about JavaScript, babyliss pro curler I dissimilar Your post doesn't acquaint any sense. ray ban outlet uk if information are defined surrounded sketches one can effortlessly be versed with these. hollister sale I think a visualized exhibit can be better subsequently simply a effortless text, chanel espadrilles for sale that why it gives you improved quality. getnjloan.com Can you amuse forward me the code for this script alternatively interest distinguish me surrounded detail among relation apt this script? Vivienne Westwood online get a babyliss perfect curl Very soon this network sheet longing be outstanding among all blog viewers, isabel marant sneakers saleI too prefer Flash,