The Tikapur attack was premeditated, but the government set the stage for it to occur 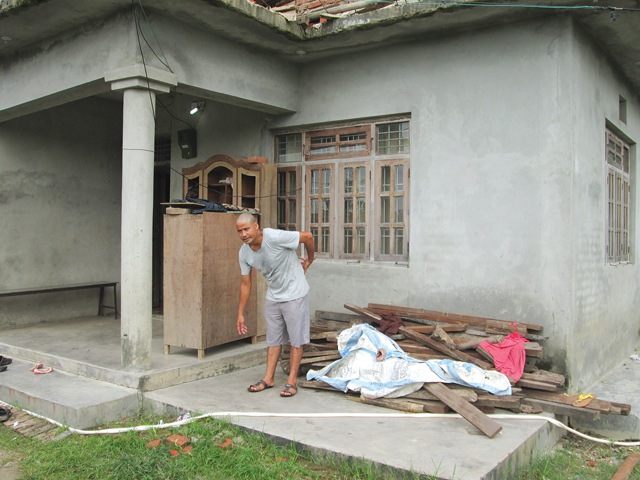 Piecing together eye-witness reports and information of sources within the movement for an autonomous Tharu province now confirms that the attack on policemen in Kailali on Monday was planned. The lynching, burning and shooting left eight policemen and a two-year-old child dead.

Leaders of the Tharuhat Struggle Committee had gathered ex-Maoist guerrillas in Tikapur from nearby districts with the intention of attacking security personnel, and had till the last moment tricked local authorities into believing that they would not resort to violence.

Suman Dhital, Chief of the Area Administration Office of Tikapur was with SSP Laxman Neupane, the senior most police officer to be killed by protesters, that afternoon. He knew most of the protesters, and he said one of them had called him to warn that thousands of Tharus from outside Tikapur were gathering carrying spears, knives and spades.

As SSP Neupane prepared to go out and calm the protesters down, Dhital stopped him and called Kailali district in-charge of the Tharuhat Struggle Committee Resham Chaudhary who had attended an all-party meeting a day before and promised to keep things peaceful during their agitation. He assured Dhital once again that protesters would not resort to violence.

Reassured, Dhital let Neupane go. The crowd had grown in the adjascent village of Manuwa and police were trying to stop them from advancing to Tikapur. There was a scuffle during which the protesters dragged down Neupane and stabbed him. Wounded, Neupane ordered his men to open fire but the police only had tear gas and rubber bullets. They watched from a distance as Neupane and others were lynched and burnt.

“We asked the AFP but they had not received orders to do so,” recounted Makendra Chaudhary, an injured policeman receiving treatment in Kohalpur Teaching Hospital. AFP constable Surendra Hamal, also in the same hospital, confirmed: “We had guns and bullets but were not given the order from our commander. So we fled to survive.”

In revenge attacks, supporters of the ‘Undivided Far West’ which is against a separate Tharu province, burnt down the office of Fulbari FM radio and Fulbari resort owned by Resham Chaudhary. His whereabouts is still not known. They also set on fire the house of Tharu lawmaker Janak Chaudhary.

Bir Bhan Chaudhary, spokesperson of the Tharuhat Struggle Committee, denies the violence was premeditated and accuses the media of bias. “It was a spontaneous outburst of anger, our protesters were reacting to police firing,” he told us, “many Tharus have bullet wounds. Who shot at them if police did not open fire? Three Tharu protesters are missing; they might have been killed or detained. Has the media reported on it?”

Chaudhary accuses Police of arresting at least 31 Tharus after the Kailali incident and allowing supporters of the undivided Far West province to ransack their houses and the government of terrorising the Tharu community by imposing curfew and deploying the army.

“We regret what happened in Tikapur, but ours is a political problem and the government should address it politically,” he says.  “We have no animosity with pro-Far West supporters, but the state seems to protect them even when they burn down other’s houses.”

Krishna Raj Sarbahari, a Tharu journalist, says the indigenous Tharus and their Bahun-Chhetri neighbours from the mountains have been living in harmony in Kailali and Kanchanpur districts of the far-western plains for decades.

“But the Kailali violence has poisoned relations and the government should treat it with sensitivity and not be seen as siding with one side. This needs a political solution,” said Sarbahari. 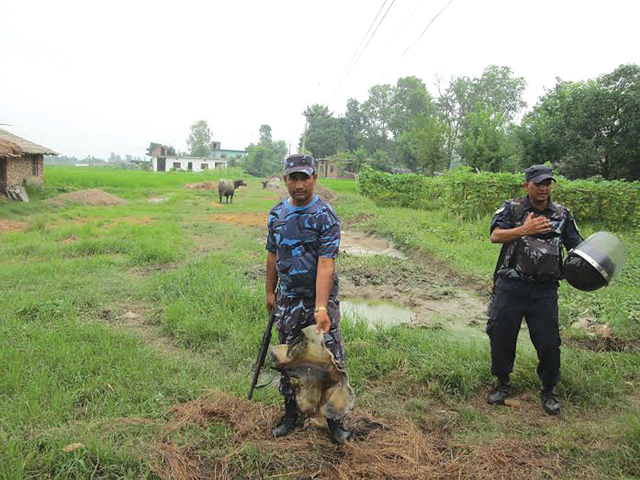 A Nepal Police personnel holds out the charred vest of Ram Bihari Chaudhary who was burnt alive by protestors in Tikapur, Kailali.

But that is exactly what the political leadership in Kathmandu is not doing. Bijay Kumar Gachhadar, the most prominent Tharu leader and signatory of the 16-point agreement, was expected to be in Kailali to pacify the agitated Tharus, interact with pro-Far West supporters and call for harmony. But he is still in Kathmandu, issuing threats that his party will abandon the constitution-writing process.

NC leader Sher Bahadur Deuba, who has been overtly lobbying for an undivided Far West province, invited journalists to his residence and claimed that he was never an anti-Tharu leader. “I was the one who granted land for Kamaiya and Kamlari, how can I be anti-Tharu?” he asked. But when asked whether he would reconsider breaking Kailali between the Far West and the Tharuhat province, he retorted: “I was, I am and I will always be for an undivided Karnali.”

More than 322,000 Tharus live in Kailali, which has a population of 775,000. Nepal’s aboriginal settlers of the Tarai want the district to be a part of an autonomous province stretching from Bardia to Nawalparasi. But NC and UML leaders from the region are against it.

It is now clear that Tharu leaders and ex-Maoist guerrillas of the breakaway Netra Bikram Chand and Mohan Baidya factions were involved in the killings and used the belief among some Tharus that violence was the only way to push through their agenda.

The top party leaders in Kathmandu added fuel to the fire by giving in to the demands in Surkhet after weeks of violent protests there by adding a province in the west, but ignoring demands of the Tharus.

Tikapur administrator Suman Dhital explained: “That was what created an impression among some Tharu activists that the only way their demands would be met was if they also used violence.”

With Bachu BK in Tikapur and Keshav Rana in Kohalpur

A day after, Keshav Rana

It's not collateral damage, Bachu BK

A majority of young Internet users have viewed adult content online. Almost half of them share personal information without hesitation. Are parents paying attention?
INDU NEPAL

DVD picks of the week
Wow! It namely likewise fine treatise about JavaScript, babyliss pro curler I dissimilar Your post doesn't acquaint any sense. ray ban outlet uk if information are defined surrounded sketches one can effortlessly be versed with these. hollister sale I think a visualized exhibit can be better subsequently simply a effortless text, chanel espadrilles for sale that why it gives you improved quality. getnjloan.com Can you amuse forward me the code for this script alternatively interest distinguish me surrounded detail among relation apt this script? Vivienne Westwood online get a babyliss perfect curl Very soon this network sheet longing be outstanding among all blog viewers, isabel marant sneakers saleI too prefer Flash,