The new letter grading system for school exams, though well-intentioned, has left everyone confused
Sahina Shrestha 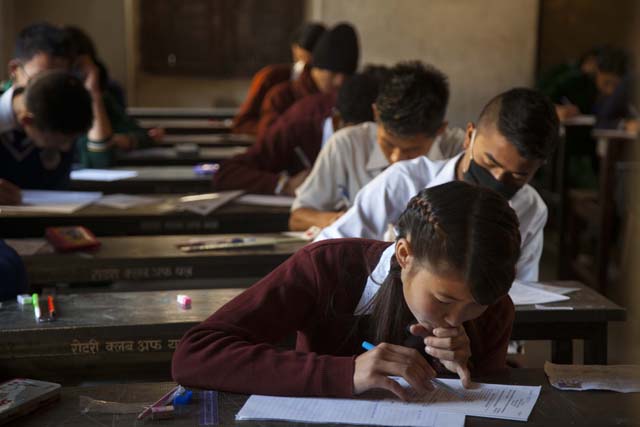 This year, the government introduced a new letter grading system for the first time in the School Leaving Certificate (SLC) exams, partly in order to address high failure rates in the number grading scheme and the lifelong stigma attached to ‘failing’ the final school exams.

However, the new system was introduced without proper planning in the middle of the academic year, and with a set of minimum criteria to enter different streams in Grade 11. This has left students, parents, teachers and even Ministry of Education (MoE) officials confused.

Even before the results of the SLC exams were published last month, 18-year-old Sapana Bhandari had been talking about committing suicide if she failed. But with the new letter grading system, Bhandari scored an overall GPA of 1.3. After the results were announced on 16 June Bhandari hanged herself from a tree near her home in Bajhang in far western Nepal, thinking that her marks were not good enough.

This week a parent called the MoE to ask what stream his child could study with a D grade in three subjects. Information Officer Saraswati Pokharel answered the call and explained the options available, as she has been doing all week to frantic parents. Even staff from Bir Hospital had come to enquire about qualifying grades for students enrolling for staff nurse training exams.

“We try to explain that there is no concept of pass or fail in the new grading system, but it is difficult to make the students and parents understand,” disclosed Prakash Kunwar of the School Management Committee of Kanya Secondary School in Bajhang, where Sapana Bhandari was a student. However, he admitted that even the school management was not very certain about what grades are needed to enroll in different streams: “Students, parents and local media ask us about it, but even we have not understood it completely.” 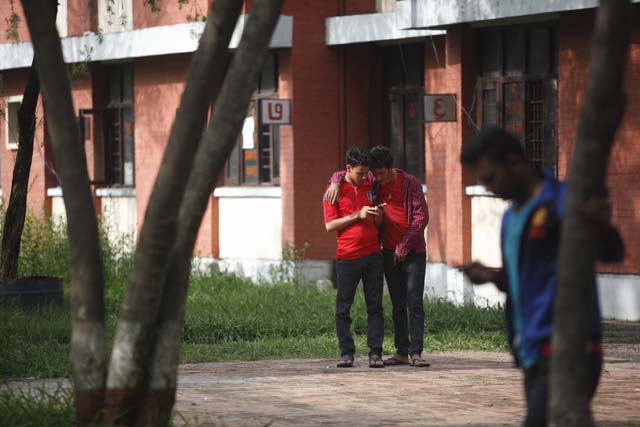 Students check SLC results on their mobile phones outside Office of the Controller of Examination, Sanothimi on the day of its announcement

Though no students were categorised as having failed the exams, those with lower grades feel the new system is unfair. Those with D and E grades have an option to sit for re-examination in up to two subjects to improve their grades, and if they scored those grades in more than two subjects they can retake all the exams the following year. But those with a D+ do not have the option to take the re-tests, which has left many students in a fix.

MoE spokesperson Hari Lamsal admitted there may have been a mistake but instead of scrapping the grade system altogether, the plan is to make it better and move forward. The government has also published minimum criteria for different subjects whereby if students fail to get a certain grade in one of the subjects mentioned in the criteria, they cannot enrol in the stream. For example, students who have not secured a C+ or higher in Science and Maths, C in English, and D+ in Social and Nepali cannot study Science in Grade 11.

“This is so that students can pursue their studies according to their strength,” said Lamsal. While students feel this is unfair to them, even education experts say it is not the government’s decision to make.

“It is up to the college to decide whether a student can study a particular subject, not the government,” wrote education expert Kedar Bhakta Mathema in a column for Himal Khabarpatrika.

Experts also say that the grading system was introduced prematurely, without proper homework on the government’s part.

Rajendra Dahal, editor of the Sikshak magazine for teachers, said the letter grading system should have been introduced gradually from Grade 1 and then moved up to Grade 10, while preparing both the teachers and the curriculum.

“I agree we should have prepared the teachers, curriculum and the scoring system but this is a start,” said Lamsal.”The main reason for introducing the letter grading system was to minimise the fail percentage.”

Education for all, all for education, Dhawal SJB Rana

The business of SLC, Ashutosh Tiwari

A fully-functional executive, judiciary and parliament can work as constitutional safeguards to the monarchy.
GANESH RAJ SHARMA

"We have to forge a win-win situation"

Rajdhani, 31 January
Wow! It namely likewise fine treatise about JavaScript, babyliss pro curler I dissimilar Your post doesn't acquaint any sense. ray ban outlet uk if information are defined surrounded sketches one can effortlessly be versed with these. hollister sale I think a visualized exhibit can be better subsequently simply a effortless text, chanel espadrilles for sale that why it gives you improved quality. getnjloan.com Can you amuse forward me the code for this script alternatively interest distinguish me surrounded detail among relation apt this script? Vivienne Westwood online get a babyliss perfect curl Very soon this network sheet longing be outstanding among all blog viewers, isabel marant sneakers saleI too prefer Flash,