The theme for this year’s conference was ‘Changing Human Behaviour’, and indeed that was seen as the key to caring for animals in a meaningful way
Ryan Heng Chang

Hundreds of experts from the world’s leading animal welfare organisations concluded the four-day Asia for Animals Conference in Kathmandu on Tuesday. Held for the first time in Nepal, it drew participants from over 45 countries. 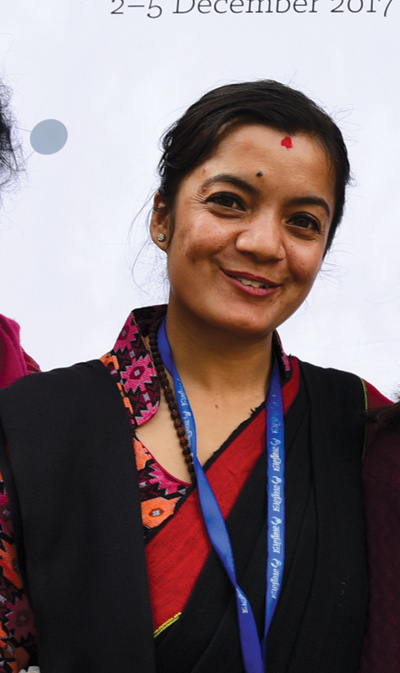 HUMANS FOR ANIMALS: Sangita Sapkota of the Jane Goodall Institute.

Nepal’s own pioneering conservationist and founder of the Chitwan National Park, Hemanta Mishra, opened the conference with a retrospective look at how Nepal's nature conservation program survived a decade of civil strife.

“Despite political differences, and there really are too many political parties out there today, local communities wholly supported wildlife and displayed courage and competency in crisis,” Mishra said. “It is encouraging to see that tiger poaching has gone down in recent years, while rhino numbers are increasing by the hundreds.”

Heartbreaking footage of dogs, cats, and donkeys being mistreated were shown during the sessions, alongside success stories and case studies of community involvement around the world to improve animal welfare. 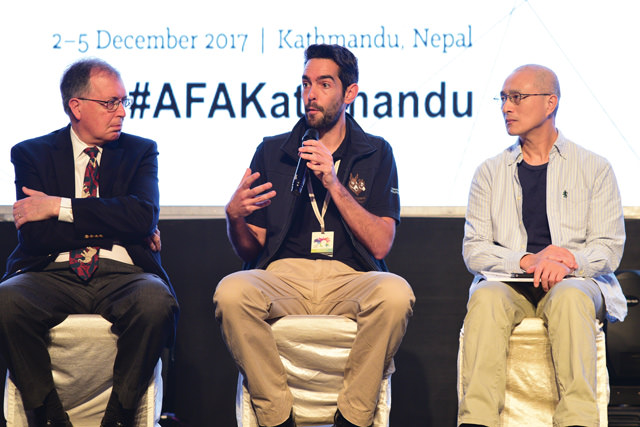 Andrew Rowan of the Humane Society, Alex Mayers from Donkey Sanctuary and Taiwanese activist Chu Tseng-Hung at a panel.

The theme for this year’s conference was ‘Changing Human Behaviour’, and indeed that was seen as the key to caring for animals in a meaningful way. Experts emphasised educating local communities across Asia on scientific and humane methods to interact with animals.

Indian environmentalist and historian Nanditha Krishna said: “You cannot succeed by just issuing laws. The only way we can change human behaviour is by going to village by village and talking.”

Pramada Shah of Animal Nepal highlighted how Lalitpur and Kathmandu municipalities have slowly changed their attitude towards ‘stray’ dogs and instead of poisoning them are now supporting campaigns to splay and treat street canines.

Indeed, Kathmandu has made dramatic strides in reducing the population of its street dogs and also their mistreatment. Volunteer groups have established ‘mobile vet’ hotlines and involved local communities to monitor canine welfare. As a result fewer injured animals are coming in from road accidents and infections. 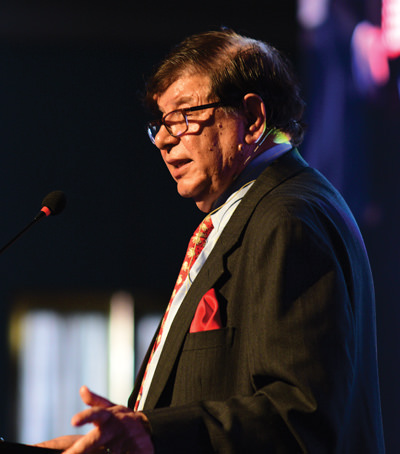 Conservationist Hemanta Mishra speaks at the plenary of the Asia for Animals conference in Kathmandu on on Monday.

“What we want is a cruelty free society. It’s innate in our culture.” said Shah. “I’m positive, in this day and age that Nepalis are a progressive people. ”

Nepal’s animal rights movement scored a major victory just days before the conference with a Supreme Court ban on culling street dogs, as well as the use of poison to control dog populations.

Efforts to stop illegal wildlife trafficking were also discussed at the conference, with Bala Ram Thapa from the Government of Nepal citing the arrest in October of six persons smuggling chimpanzees and exotic birds through Tribhuvan International Airport.

“Make no mistake,” Thapa said of the incident, “the criminals will be in jail for 20 years.”

Andrew Rowan, executive director of the Humane Society of the United States, said that although animal welfare in Nepal has improved there is still much more work to be done.  He says that animal groups in Nepal should be working more closely together, and under the backing of standardised government law.

“There are many drafts of laws being made today, but the next step is to pass them,” said Rowan.

The conference ended with a field trip on Wednesday to Chitwan National Park, Nepal's conservation success story which has rescued the Royal Bengal Tiger and the Asiatic One-horned Rhinoceros from the brink of extinction.

Whether youre a techie, or just like gadgets, heres part I of an occasional NT series on the latest in the world of gizmos

A Teku institution serves up the most innovative momos in town.

Tourism to Nepal and the region takes a hard knock amidst fears of US retaliation.
Wow! It namely likewise fine treatise about JavaScript, babyliss pro curler I dissimilar Your post doesn't acquaint any sense. ray ban outlet uk if information are defined surrounded sketches one can effortlessly be versed with these. hollister sale I think a visualized exhibit can be better subsequently simply a effortless text, chanel espadrilles for sale that why it gives you improved quality. getnjloan.com Can you amuse forward me the code for this script alternatively interest distinguish me surrounded detail among relation apt this script? Vivienne Westwood online get a babyliss perfect curl Very soon this network sheet longing be outstanding among all blog viewers, isabel marant sneakers saleI too prefer Flash,