In a narrow alleyway deep in the heart of Patan adjacent to the ruins of a clay-mortar house, a four-storey concrete block stands tall, unscathed except for some minor cracks. In street after street of the ancient towns in the Valley, centuries-old temples and ancestral homes have been reduced to rubble right next to buildings made of cement.

“We learnt during this earthquake that cement houses are stronger," said 41-year-old mother of two, Mira Maharjan, who is afraid that her own brick-and-mud house may not withstand another quake. "But my parents live in a cement house, so I am not worried." Maharjan works in Patan Museum and was lucky to survive the collapse of the east wing of Sundari Chok. 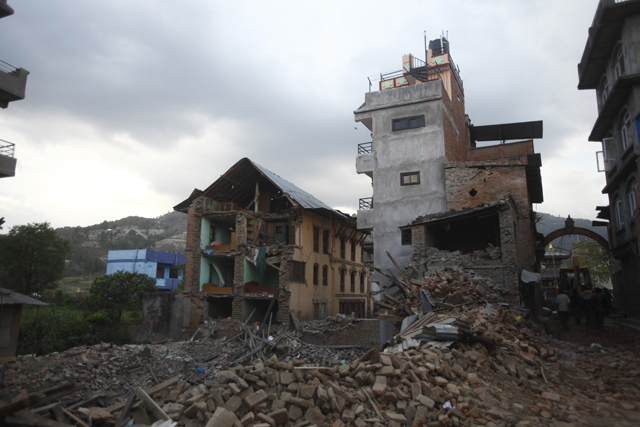 Because so many of Kathmandu's concrete-built structures survived, it has confirmed public perception that these are structurally safer than traditional clay-mortar brick buildings. However, engineers specialising in seismic-resistant housing say Nepalis may have been lulled into a false sense of security with this renewed trust in concrete.

“The only reason reinforced concrete structures survived this time was that the intensity and duration of the earthquake was not as big as predicted," said Padma Sundar Joshi of the United Nations Human Settlements Program (HABITAT). "If the intensity was a notch higher and if the shaking had gone on for 10 seconds longer, the reinforced concrete buildings would have also come down."

The 7.3 magnitude aftershock on Tuesday brought down concrete buildings already weakened by the previous quake two weeks ago, and forced the people back to shelters in open spaces. Maharjan who had already gone back to her house, returned to her shelter at the royal garden behind Patan Darbar Square.

“I was taking pictures of the damage of my brick-and-mud house when another one hit us,” said Maharjan. “I don’t know when I’ll go back to my house.”

The problem lies with traditional masons who lack the training and knowledge to ready concrete moulds, and often do not know how to prepare joints for iron rods, they do not following time limits on mixing cement, and design houses with unsafe cantilevers and unnecessary decorations. Joshi warned: “If we don’t change the way we work with cement in Nepal, building more reinforced concrete houses will lead to disaster." 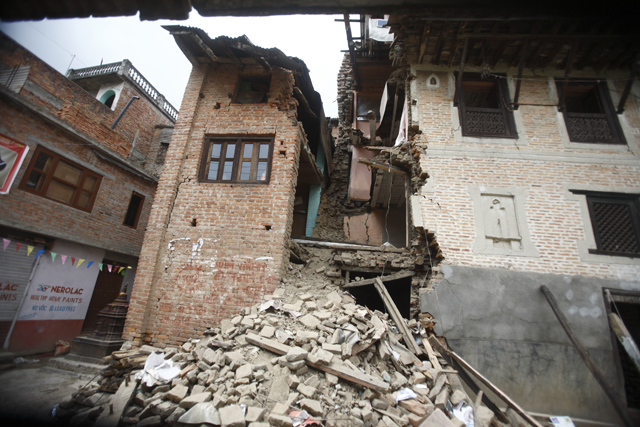 Bijay Karmacharya is a Nepali engineer currently working for post-disaster housing in Burma, and likens building homes to visiting a doctor. “If you need an operation, you go to a qualified surgeon. But if you want to make a house, why don’t you go to a qualified engineer? After all, both professions are essentially about saving lives.”

Kathmandu already has a strict urban building code prepared in 1993 containing specific guidelines for the design, construction and mandatory rule of thumb (MRT) for buildings up to three floors, but the code has to be revised and enforced.

Seismologists have been surprised by scale of the destruction in the mountain districts north of Kathmandu because they had expected much more devastation in the Valley. Now, they worry that many families will build reinforced concrete houses in district headquarters or in villages where engineering norms are even less strictly followed than in the city.

Upadhyay said: "If new reinforced concrete houses are not properly made, you don't even need a 7 magnitude earthquake to bring them down."

The Nepal Engineering Association (NEA) has deployed 3,000 engineers to go house-to-house for a rapid assessment of buildings to categorise them as liveable, repairable and ones that need to be demolished. After the earthquake and aftershocks, many families haven't gone back to their homes even though they are safe or can be retrofitted.

Upadhyay reckons that one-third of the 600,000 houses that were destroyed or damaged in the earthquake can be repaired, and this would be cheaper than rebuilding them.

Seeing neither forests nor trees

A taste of home

Fighting Alzheimers to preserve a long-lasting love
A. ANGELO D'SILVA
Wow! It namely likewise fine treatise about JavaScript, babyliss pro curler I dissimilar Your post doesn't acquaint any sense. ray ban outlet uk if information are defined surrounded sketches one can effortlessly be versed with these. hollister sale I think a visualized exhibit can be better subsequently simply a effortless text, chanel espadrilles for sale that why it gives you improved quality. getnjloan.com Can you amuse forward me the code for this script alternatively interest distinguish me surrounded detail among relation apt this script? Vivienne Westwood online get a babyliss perfect curl Very soon this network sheet longing be outstanding among all blog viewers, isabel marant sneakers saleI too prefer Flash,