The high demand to climb the world’s highest mountain, and the need for Nepali high altitude staff won’t change 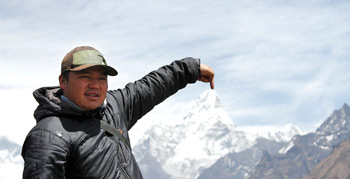 Ash Bahadur Gurung
The Spring 2014 climbing season in the Khumbu was already affected by the blacklisting of Nepal’s domestic airlines by the EU.

Then came the avalanche disaster on 18 April which killed 13 Nepalis on Mt Everest with three still missing. Nepali guides at Base Camp decided on Tuesday to halt all expeditions.

“After today’s meeting we have requested everyone here to stop climbing this season to honour all those who lost their lives and are still missing,” Tulsi Gurung, a local guide and three time Everest summiteer told Nepali Times from Base Camp on Tuesday. “Some of our friends are still missing, we cannot imagine stepping over them,” said Gurung, whose brother Ash Bahadur Gurung (pic above) is among three climbers still missing.

The government agreed this week to raise the insurance coverage of high altitude workers and support staff to Rs 1.5 million and medical coverage to Rs 400,000. But the Ministry of Culture, Tourism and Aviation on Tuesday urged Nepali expedition staff to resume work after a week of mourning.

Some expeditions also want to continue. “We respect the decision of those who don’t want to climb because of the tragedy, but that doesn’t mean all expeditions will be halted,” says Ang Tshering Sherpa, president of Nepal Mountaineering Association.

The final decision to continue or cancel climbing Mt Everest this season will immediately impact the at least 300 climbers and 400 support staff at Base Camp, and also affect the economy of the Khumbu region.

However, in the longer term, there are two things that won’t change: the high demand to climb the world’s highest mountain, and the need for Nepali high altitude workers in commercial expeditions.

“You cannot get a commercial expedition’s customers up without Sherpas,” says Elizabeth Hawley who has kept records of expeditions in Nepal for nearly 50 years, and her Himalayan Database is regarded as the definitive history of past climbs.

In the aftermath of the Everest avalanche, the issue of climbing safety for Nepali support staff, their salary and compensation has dominated the discourse.

A meeting of Nepali climbers at Base Camp this week issued a 13-point demand that includes better pay, increased compensation for death or injury on the mountain, doubling of insurance, and even building a monument in Kathmandu. But there were no demands for minimising the risk.

One idea floated last year to reduce the danger to climbers on the Khumbu Icefall was to ferry loads by helicopter to Camp 1. New model helicopters have better performance and have an operating ceiling of up to 7,000m. But Hawley is skeptical it will work: “You need enough helicopters, we don’t have very many. And they keep crashing.”

Nepal’s spotty aviation record aside, Hawley is not certain expeditions would want to bear the cost of helicopter rentals even if it would make climbing safer.

The math says Nepali climbers make as many as 30 trips up and down the Khumbu Icefall during a season. Their employers will make the trip only 3-4 times at most. Increasingly, commercial climbers will acclimatise on the other smaller peaks in the region, rather than on Everest to minimise risk.

For Tashi Sherpa of the international outdoor wear company, Sherpa Adventure Gear, there is something grossly unfair about the risk that Nepali climbers take. He said: “I find it baffling that the critical component to the glory of climbing Everest has the highest risk and the lowest valuation.”

If we cant find a solution, let others help us do it

SUBINDRA BOGATI
Wow! It namely likewise fine treatise about JavaScript, babyliss pro curler I dissimilar Your post doesn't acquaint any sense. ray ban outlet uk if information are defined surrounded sketches one can effortlessly be versed with these. hollister sale I think a visualized exhibit can be better subsequently simply a effortless text, chanel espadrilles for sale that why it gives you improved quality. getnjloan.com Can you amuse forward me the code for this script alternatively interest distinguish me surrounded detail among relation apt this script? Vivienne Westwood online get a babyliss perfect curl Very soon this network sheet longing be outstanding among all blog viewers, isabel marant sneakers saleI too prefer Flash,