Electing for a better future SAMMAN HUMAGAIN
Bhim Neupaneaddressing a campaign rally on Monday in Panauti Municipality, where he is standing for mayor.

The bucolic village of Kushadevi offers vivid proof of how grassroots democracy can unleash development, and how the prolonged absence of elected local officials can undermine it.

Located just over the eastern rim of the Kathmandu Valley, the village has in the past decades emerged as a major source of vegetables, dairy products and manpower for the capital city.

Since 1990, Kavre has become a success story for community forestry and a model for how accountability through elections can lift living standards in Nepal’s villages.

“We lost the last 16 years after our VDC councils were dismantled, and what was left was destroyed by the Maoists. We have started rebuilding democracy again from the grassroots,” says Bhim Neupane, who was elected in 1992 and 1997 to head the Kushadevi Village Development Council and is now standing for mayor. 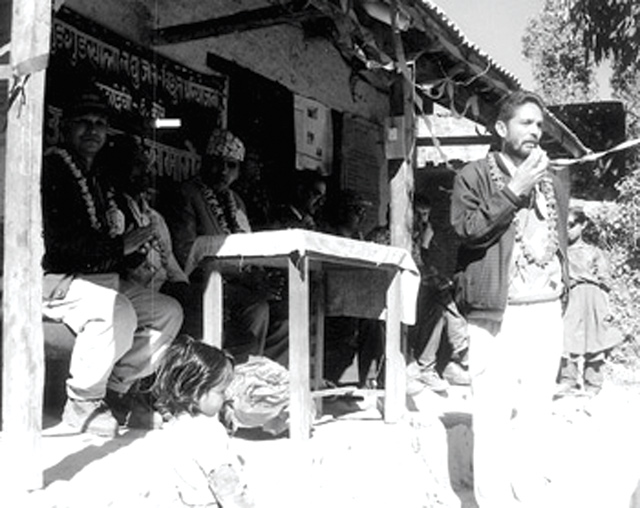 This time, Kushadevi has been merged with Panauti Municipality and 10 other surrounding rural VDCs. The issues are also different, says Neupane: while many of his constituents are still farmers, there is a growing urban middle class. The council he is being elected to is also much more powerful: it can make local laws, raise taxes and decide on projects.

One rainy morning this week, with just days to go before elections, Neupane was campaigning door-to-door, meeting voters, many of whom he knew by name. Even though he had to step down when the government of Prime Minister Deuba cancelled scheduled local elections in 2002, like many VDC members across Nepal, Neupane did not stop serving his constituency. His electors looked up to him as if he was still their leader.

“Just look at them: there is so much enthusiasm for this election here. That is because they know how far development was pushed back because of the absence of elected officials, and how our rivers and mountains were looted by the mining mafia,” Neupane says.

Neupane’s UML is riding a nationalist wave from his party’s vigorous opposition to the Indian blockade during KP Oli’s prime ministership last year, but many locals say the development agenda is much more important to them.

“We suffered a lot during the blockade, but now with local elections we are looking forward to making up for lost time. It doesn’t matter which party the candidate is from, what we are looking for are honest leaders who can fulfil their promises,” says Laxman Humagain from Kushadevi, who works in a school in Kathmandu. Seventeen years ago, the newly re-elected Neupane was interviewed by this newspaper while inaugurating a micro-hydro project in a remote ward a day’s walk south of Kushadevi. He said: “People are now aware, they are able to plan and work together to improve their living standards.”

But soon, the Maoists demolished Nepal’s fledgling grassroots democracy, which was beginning to deliver basic services to the people. In Kushadevi itself, Neupane’s comrade Krishna Sapkota was beheaded by the Maoists and his decapitated body displayed in the village square to terrorise locals. The Maoists also bombed the VDC building, which housed a health post and a school support unit. Throughout it all, despite threats, Neupane remained in his village.

In his campaign speeches, Neupane doesn’t make wild promises of railway lines or superhighways. He promises to continue where he left off to create jobs in tourism and the service industry, set up health posts and provide free checkups every six months for his constituents. Krishna Prasad Sapkota was the elected chair of Kavre DDC when Neupane was heading Kushadevi VDC in 2000. The two worked well together and both were determined to make democracy work. When the VDCs were disbanded, Sapkota went on to become MP. He now fears that there is a danger of local elections being hijacked by the mining mafia that has grown rich and powerful in the past 20 years (see Guest Editorial, page 2).

“Grassroots corruption is now so deeply entrenched that this malady may undermine accountability in the newly elected local governments,” he says. “Those who plundered local resources without having to answer to the public are now trying to trick people to vote for them.”

Asked about this, Neupane admits that the lack of accountability allowed Kathmandu-based businesses to establish quarries and crusher industries and to mine sand along the Rosi Khola. But he says the election is an opportunity to set things right.

“This is the beauty of democracy: people now know exactly what is going on and they can vote for the people who they think are most qualified to better their lives.”

Editorial in Jana Astha, 8 June
Wow! It namely likewise fine treatise about JavaScript, babyliss pro curler I dissimilar Your post doesn't acquaint any sense. ray ban outlet uk if information are defined surrounded sketches one can effortlessly be versed with these. hollister sale I think a visualized exhibit can be better subsequently simply a effortless text, chanel espadrilles for sale that why it gives you improved quality. getnjloan.com Can you amuse forward me the code for this script alternatively interest distinguish me surrounded detail among relation apt this script? Vivienne Westwood online get a babyliss perfect curl Very soon this network sheet longing be outstanding among all blog viewers, isabel marant sneakers saleI too prefer Flash,