Four months into the Indian blockade, prices are soaring, the currency is depreciating and the economy is in the hands of black marketeers 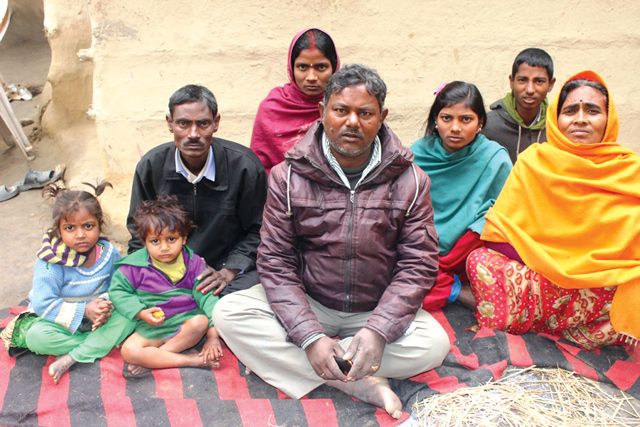 In August last year, as Madhesi parties began protests against Nepal’s new constitution, Shiva Narayan Paswan (pic left, with his family) was one of the first textile workers to be laid off in Bara. The sole breadwinner of his family, he has been borrowing from friends to feed his family and is deeply in debt.

Paswan, 45, thought that the Madhes unrest would end and his factory would reopen soon. It has now been five months, and there is no sign of the blockade being lifted. There are hundreds of thousands of heads of households like Pasan across Nepal.

“Every morning I wake up with hope. But it just turns out to be yet another day of despair," he says sitting cross-legged on a mattress outside his mud and bamboo house. “No one is willing to lend me any more money.”

His wife, Jitani Devi, added: “We sometimes sleep hungry. My little children shiver with cold, but we do not have money to buy warm clothes for them.”

“Now, just calculate how much money we have lost in the 150 days of Madhes agitation,” says FNCCI President Pashupati Murarka. “It’s a huge amount.”

For an economy already reeling from the earthquake in April, the Madhes agitation and the blockade since mid-September has been fatal. Some checkpoints are opening but the Birganj border through which Nepal gets 70 per cent of its fuel imports from India is still blocked.

“Some businesses are adapting to the crisis buying fuel in black-market,” says Murarka. “But many remain either closed or only partially operational.”

An estimated 700,000 people have been pushed below the poverty line, inflation is soaring and the currency is depreciating. “It is mostly low-income people who are losing jobs and paying more for food and fuel,” says Dipendra Purush Dhakal, a former Nepal Rashtra Bank governor. “In this kind of situation, women and children always suffer the most.” 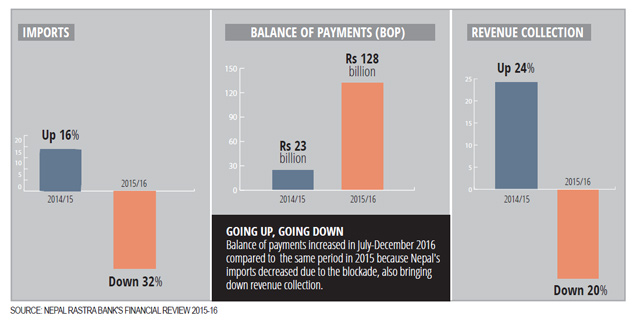 Dhakal fears that the malnutrition rate, which Nepal has successfully brought down, could rise again if the current economic crisis continues. “We are now just looking at the economic impact of the blockade,” he says. “Its impact on our social indicators will also be very costly.”

The Central Bank published the financial review of the first five months of the current fiscal year (mid July-mid December) this week, painting a grim picture of Nepal’s economy. The inflation rate has increased to 13.4 per cent in Kathmandu, it is now 10.2 per cent in the Tarai, but the actual price rise could be much higher.

The blockade has hit Nepal’s external trade, too. Revenue collection is down by 20 per cent, and it is now impossible to make up for loss in the remaining months of the current fiscal year. Income of service sector has shrunk by nearly 43 per cent. Not even five per cent of budget allocated for capital expenditure has been spent.

“The loss of revenue will affect overall development,” says Dhakal. “If this situation persists, it is likely that the government will have no money for national priority projects and social programs like elderly allowance and child immunisation.”

The trade deficit has narrowed, balance of payment has improved and foreign currency reserves have increased because of the blockade, but economists say this is not a good sign. “Our stock of foreign currency has increased because we haven’t been able to import essential commodities,” says economist Keshav Acharya. “This is nothing to be proud of.”

The political crisis may end any time with a deal between the ruling and the agitating parties, but the impact of the economic crisis will be long-term. Acharya says: “This crisis has discouraged investors. They will be thinking at least twice before investing money in Nepal.”

Murarka of the FNCCI says: “Once the blockade ends, all the political parties must sign a written commitment that they will not target economic activity in future. And they must prove that they mean it, otherwise bringing back investors will be very difficult.”

With input from Suresh Bidari in Bara

Tihar is here, take a bet on the market value of professional gambling

Rukum after the sweep

Three weeks after the armys operation, the Maoists are back in their strongholds in midwestern Nepal
MAARTEN POST in RUKUMKOT

Kathmandus groundwater is contaminated and getting worse
NARESH NEWAR
Wow! It namely likewise fine treatise about JavaScript, babyliss pro curler I dissimilar Your post doesn't acquaint any sense. ray ban outlet uk if information are defined surrounded sketches one can effortlessly be versed with these. hollister sale I think a visualized exhibit can be better subsequently simply a effortless text, chanel espadrilles for sale that why it gives you improved quality. getnjloan.com Can you amuse forward me the code for this script alternatively interest distinguish me surrounded detail among relation apt this script? Vivienne Westwood online get a babyliss perfect curl Very soon this network sheet longing be outstanding among all blog viewers, isabel marant sneakers saleI too prefer Flash,