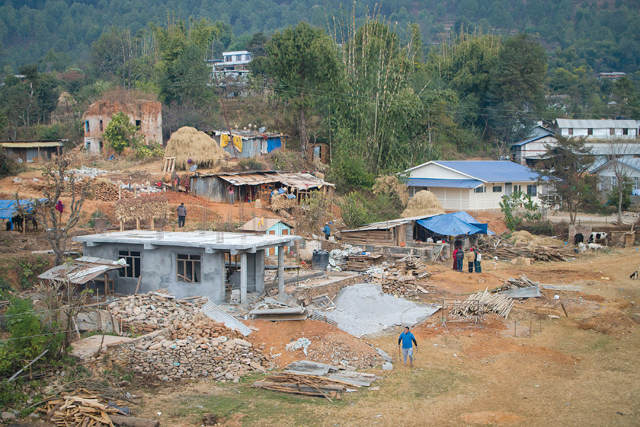 Pics: RAJNEESH BHANDARI
RISING FROM RUINS: Ruined homes, temporary shelters and a home being rebuilt in a village in Dolakha. .

It’s midnight. Rain is making a din on the tin roof of Kanchaman Dong’s one-room, four-bed shelter. This has been his family home for the past two years after the April 2015 earthquake.

Kanchaman tried to ignore the rain and cold, and just hoped for a warm sunrise in the village of Duwachaur, a jolting 8-hour ride across a rough mountain road. The earthquake killed seven members of the Dong community in Duwachaur: every household lost someone. A Lalitpur-based relief agency promised to rebuild the 36 homes destroyed here, but after making nine tin-roof huts, it didn’t come back.

The relief agency says it left construction material for the remaining houses but had to abandon the project because of a disagreement with villagers about their contribution to the reconstruction effort. It also says the Chief District Office in Chautara didn’t show much interest in the help it was bringing.

Duwachaur is a story repeated right across the 14 earthquake-affected districts. It is a tale of how after initial interest, the government, aid agencies and relief groups slowly lost interest in helping survivors.

Meanwhile, Kanchaman Dong has just got the Rs 50,000 first instalment of the government reconstruction grant, but it isn’t enough to buy the needed materials. In many earthquake-hit villages, the first instalment has been spent to buy food and essentials, and the rebuilding never started.

Kanchaman Dong’s biggest item of expenditure is labour and transport costs. He says: “It is the transportation cost that keeps me afraid of attempting to build a house.”

By the time his house is finished, Mahat’s home will cost five times more than what the government has promised in reconstruction grants.

The Ministry of Urban Development’s Design Catalogue for Reconstruction of Earthquake Resistant Houses has designs for homes made of stone and mud mortar, brick and mud mortar, stone and cement, and brick and cement. The cost to build these seismic-resistant designs is between Rs 1-3 million.

Reconstruction in Kathmandu is even more expensive. Umesh Maharjan from Lalitpur is building a six-room house after his previous one was damaged in the quake. He hired a contractor for Rs 3.5 million to rebuild his house – 10 times more than the grant he is getting from the government.

A government estimate showed that 602,257 houses were destroyed, and 285,099 houses partially damaged. It pledged Rs 200,000 in three instalments for reconstruction, and last year Prime Minister Pushpa Kamal Dahal raised that to Rs 300,000.

But after two years, the government grants have been used to complete only 18,315 houses, while 34,732 are under construction. “The cost of making a house with the seismic-resistant design will cost more in rural areas because of the transportation cost of the materials,” said Machaman Dangol of the Department of Urban Development. 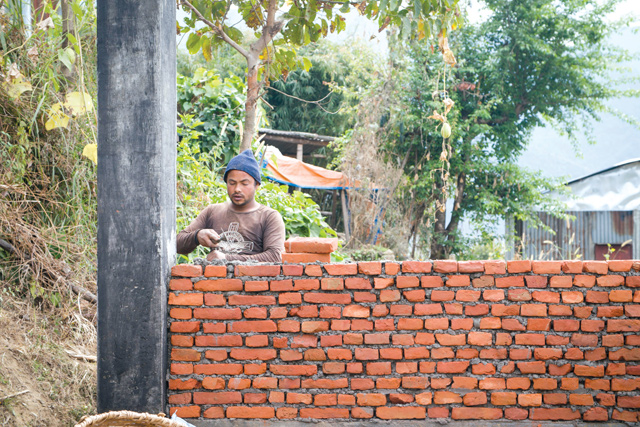 Both in villages and cities, it is clear that the government grant, even when it does finally come, will not be enough. After completing their houses, both urban and rural builders have one thing in common: wait for the remaining grant from the government, and take on a huge debt for the remaining amount. Tek Bahadur Mahat (pictured above) in Thokarpa, for instance, invested half of the amount from his savings and took loans of Rs 700,000 from friends to build his house.

“I hope the rest of the reconstruction grant will be useful in repaying the debt in 2-3 years with interest,” Mahat said. “The government’s Rs 300,000 doesn’t even buy the roofing material.”

In Kathmandu, Yubaraj Khatiwada, former governor of the Nepal Rastra Bank and ex-chief of the National Planning Commission, is worried that indebtedness will rise in households with no other source of income. “The households without remittance income, no surplus cash crops or no local business, and those who do not qualify for housing grants for one reason or another, will be worst hit.” 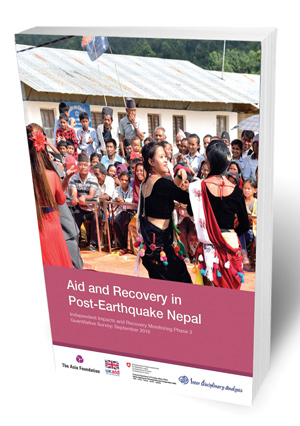 The situation of survivors of the April 2015 earthquake is overwhelmingly bad, says the third in a series of surveys of survivors in 11 earthquake-affected districts.

Earlier surveys, with many of the same people, were held in June 2015 and February-March 2016. A fourth wave of surveying and fieldwork is planned for the second anniversary of the quake in April 2017.

‘Almost everyone now says that electricity, drinking water, access to a medical facility, schools and motorable roads are provided by the government,’ notes the report.

But overall, the document calls for urgent action, starting with shelter. ‘The shelter situation remains worrying with 71 per cent in the most-affected severely hit districts continuing to live in temporary shelters. While many have moved back into their own house, others have left their house to return to shelters often recognising that they are unsafe.’

It adds: ‘Among those whose houses were badly damaged or destroyed, 72 per cent have not done anything to rebuild. The most common reasons for this are a lack of money (89%) and people still waiting for cash from the government (66%). Increases in the price of construction materials and labour have also hampered rebuilding.’

The survey was carried out by The Asia Foundation, with support from the UK aid agency DfID and the Swiss Agency for Development and Cooperation. It calls for urgent action in four areas: Shelter and housing: Roll-out of cash grants through the housing reconstruction program must be accelerated. A medium-term strategy to improve the quality of temporary shelters is still needed.

Debt and borrowing: Further cash grants, or the direct provision of construction materials rather than loans, are needed. Ideally, loans would be provided at low interest rates and from formal providers such as banks. The government may have a role providing incentives to open bank branches in rural areas. Trauma: Enduring psycho-social trauma is a reality for many. There is a need to track trauma, and to develop programs to respond to it.

Marginalised survivors:  ‘Those who were vulnerable and marginalised before the earthquakes—low income, low caste, the disabled—are those who are most likely to be struggling to recover. It is vital that more attention and resources are directed to these groups so they are not left further behind.’

Thrill of a lifetime

In Nepals roadless and remote Karnali, the march of time and "development" have finally killed the salt caravans.
CHHAKKA BAHADUR LAMA

Toothpaste is now Nepals fourth-largest export. The war is on between personal care products.
JESSE PESTA
Wow! It namely likewise fine treatise about JavaScript, babyliss pro curler I dissimilar Your post doesn't acquaint any sense. ray ban outlet uk if information are defined surrounded sketches one can effortlessly be versed with these. hollister sale I think a visualized exhibit can be better subsequently simply a effortless text, chanel espadrilles for sale that why it gives you improved quality. getnjloan.com Can you amuse forward me the code for this script alternatively interest distinguish me surrounded detail among relation apt this script? Vivienne Westwood online get a babyliss perfect curl Very soon this network sheet longing be outstanding among all blog viewers, isabel marant sneakers saleI too prefer Flash,