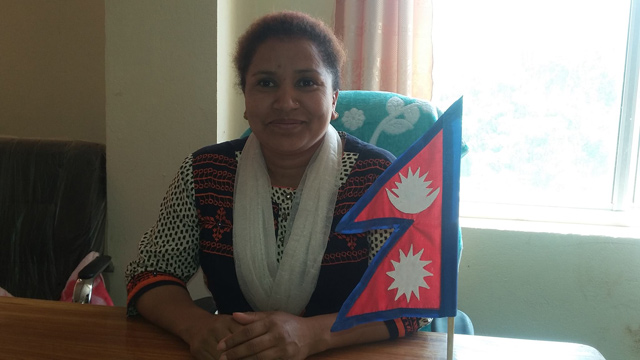 IN OFFICE: After being elected as a Ward Committee member under the Dalit quota in Narayan Municipality of Dailekh, Parbati Bisunke aims to be Mayor or MP in five years.

All her life, Parbati Bisunke (pictured, above) has faced triple discrimination: as a woman, as a Dalit and as a Dalit woman.

She was fortunate enough to go to school along with her four younger brothers, but first had to finish household chores every morning. Her brothers never needed to work in the kitchen.

Bisunke did well in Sanskrit in class, and was recommended for a scholarship to study in Varanasi. But the headmaster rejected it saying Dalits did not need to master the language of the priesthood.

When Bisunke was chosen by the UML as a candidate in Narayan Municipality-8 of Dailekh district, she faced opposition from Dalit men within her own party who felt their contribution was undermined just because they were men.

After winning the election last week, Bisunke thought the achievement would finally reduce ostracisation by other castes as well as by men from her own community. But at her victory rally some supporters refused to smear auspicious red vermilion powder on her face because she was a Dalit.

“It was heart-breaking but not surprising,” she told us. In some villages of the mid-western mountains of Dailekh, Dalits can buy a cup of tea at just Rs 9 while non-Dalit customers need to pay Rs 10. Dalits get a discount because they have to wash their own glasses.

“We are still treated as untouchable,” says Bisunke. “My electoral victory has not ended discrimination, but I will fight against it during my five-year tenure.”

Bisunke is one of the 2,500 Dalit women who have been elected to Ward Committees of 283 Municipalities and Village Councils in the first phase of local elections on 14 May. This number will increase to 6,500 from 483 local government units in the second phase of polls on 14 June.

Three Dalit women have also been elected Deputy Mayors and seven more as Deputy Chiefs of Village Councils in results so far.

“This is revolutionary. Never before have Dalit women gained so much power in Nepal,” says rights activist Renu Sijapati. When Nepal held its last local elections in 1997, it was mandatory to elect one woman to every ward committee. Most women elected that year went on to fulfill greater political and social responsibilities.

She adds: “It is now possible for a Dalit woman elected this year to be Nepal's first Dalit woman president in 20 years time. I may be too optimistic, but the elections have surely given us a reason to hope for that.’

Nepal’s new Constitution in 2015 guaranteed that two of the five members of every Ward Committee would be female, but it was not constitutionally guaranteed that one of the two seats reserved for women would go to Dalit women.

Even when the Local Level Election Act 2017 was promulgated under the new Constitution, Dalit women still did not have one seat reserved. Jeevan Pariyar, a Dalit MP from the NC registered an amendment bill seeking reservation for one of the two women seats for Dalit women and had it passed by Parliament.

Pariyar says the 2017 local election has been like a revolution. He adds: “We often hear that it was the Maoist war that raised political awareness among Dalits, that was nothing compared to what has taken place with these local elections. Not just the winners, the losers will now prepare for the next elections, and beyond that. This will change the face of Nepali politics.”

Others are not so sure because they say that when political parties could not find suitable Dalit women candidates, they chose token Dalit women in many constituencies.

Kala Swarnakar, President of the Feminist Dalit Organisation (FEDO) says: “Given the socio-political and economic status of Dalit women, it was a given, but look at the bigger picture. This is a victory for all Dalit women in Nepal not just for the 6,500 elected members.”

To be sure, not all Dalit women are token candidates -- many are educated, opinionated, articulate, courageous, and capable of influencing policy in self-governing local councils.

Just like Parbati Bisunke. She was not chosen as a candidate for her caste and gender but her involvement in advocacy for human rights for which she won three awards for supporting people displaced by the Maoist war.

Bisunke, a political science student, is asked what next. Her confident reply: “To be a Mayor or Member of Parliament in five years.”

The government has a lot of catching up to do

The government and Madhesi militants are talking not because they want a solution, but to be seen as striving for one
PRASHANT JHA

The Gurkhas and Lahore

In the city where it all started, they don't even know who Lahures are
MALLIKA ARYAL
Wow! It namely likewise fine treatise about JavaScript, babyliss pro curler I dissimilar Your post doesn't acquaint any sense. ray ban outlet uk if information are defined surrounded sketches one can effortlessly be versed with these. hollister sale I think a visualized exhibit can be better subsequently simply a effortless text, chanel espadrilles for sale that why it gives you improved quality. getnjloan.com Can you amuse forward me the code for this script alternatively interest distinguish me surrounded detail among relation apt this script? Vivienne Westwood online get a babyliss perfect curl Very soon this network sheet longing be outstanding among all blog viewers, isabel marant sneakers saleI too prefer Flash,