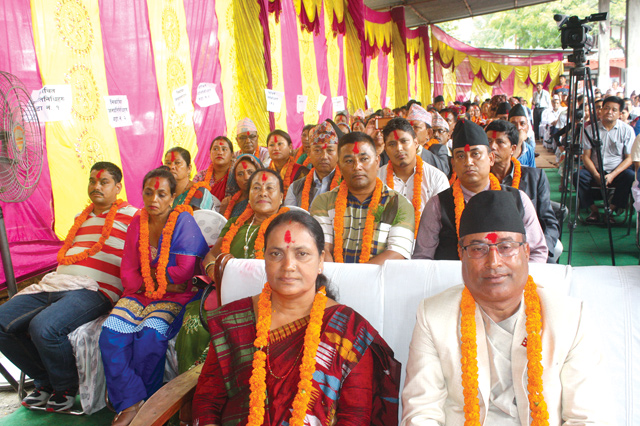 LET'S GET TO WORK: Newly elected UML Mayor Shiva Raj Subedi and his Deputy Goma Acharya (front row, left) in Butwal where they were congratulated by the defeated candidates. In Shivaraj municipality of Kapilvastu, Shiva Kumari Tharu (below) was elected Deputy Mayor at just age 23.

After the first phase of local polls in May, then Prime Minister Pushpa Kamal Dahal had said that the people had replaced the Singha Darbar in Kathmandu with “their own local Singha Darbars”.

Now that the second phase of local elections have also been held with a massive 73% turnout and the remaining Province 2 is next, there is hope that the powers of Kathmandu are finally being devolved to locally-elected municipal and village councils.

Indeed, the 744 local governments being elected in these polls are not just local units of the central government. They are empowered to govern fully with executive, legislative and judicial powers.

But a draft Inter-governmental Fiscal Transfers Bill in Parliament aims to retain Kathmandu’s centralised power by cutting off the money supply to newly elected local governments so that they will have little money to exercise their constitutionally mandated authority.

“It is like throwing a man into the river with his hands and legs tied,” says Krishna Prasad Sapkota, former DDC Chair of Kavre and decentralisation activist. “It is a conspiracy to centralise power, keeping people reliant on Kathmandu for everything.”

Sapkota says the bill is so regressive as it takes back rights already given to local government bodies by the Local Self Governance Act of 1999, which allowed DDCs and VDCs to use half the revenue from hydropower, mines and minerals to DDCs, VDCs and municpalities. From tourism and hydropower, they got 30% and 10% of revenue respectively.

But the new bill proposes that municipalities and village councils will now get just 5% of revenue from natural resource extractions, allotting the largest slice of 85% for the Centre and 10% for Provincial governments. 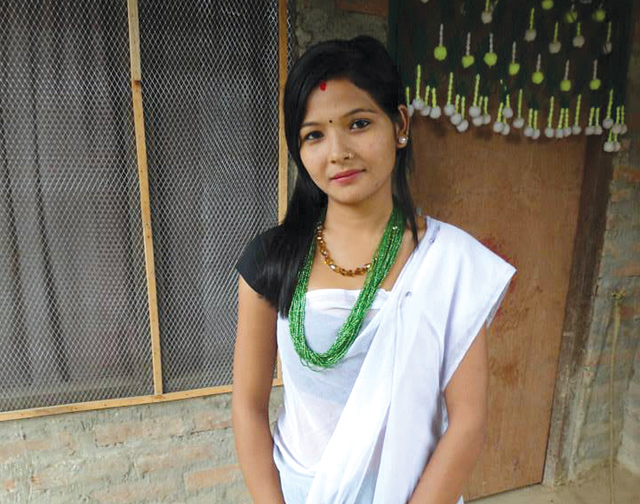 One of the highlights of the constitution 2015 is that it has given 22 exclusive rights to municipal and village councils, which will also share other duties and responsibilities with provincial governments and the Centre. Municipal and village councils will be responsible for more than half of the government workload, so they need the revenue sources to be able to deliver services.

“More workload means more expenses. Municipal and village councils have been given rights, duties and responsibilities, but very little money,” explains Khim Lal Devkota, an expert on fiscal federalisation. Nepal’s federal constitution allows the Centre to provide conditional grants to local governments that cannot generate enough revenue from natural resources. But the draft bill proposes distributing 78% of VAT and excise to the Centre and 7% to provinces, leaving just 15% for local councils. Devkota argues that the bill violates a constitutional provision to set up the Natural Resources and Fiscal Commission.

Another bill that is also before Parliament requires municipal and village councils to deposit all housing, entertainment, vehicle registration and other local taxes in a fund managed by the provincial government which would need the provincial government’s approval to spend. The bill goes against Article 51 of the constitution, which states that local people will have preferential rights over benefits from local natural resources.

Bimal Pokharel, Executive Director of the National Association of VDCs in Nepal, says the fiscal transfers bill and other recent government directives reflect the mind-set of the political establishment which does not want to relinquish control over power and money.

Last month, the Ministry of Federal Affairs and Local Development issued a list of do’s and don’ts for newly-elected local representatives. While most were justifiable, some of the directives clip the wings of new mayors, village chiefs and other elected representatives. One of them directs the local government secretary, instead of the mayor or village chief, to inspect, monitor, control and regulate all schools, health posts, government and no-government organisations in their areas.

“If the municipality secretary does all this, what will the mayor do?” asks Pokharel. “Mayors or village chiefs are executive, not ceremonial. But it looks like Kathmandu is not ready to see powerful executives in villages.”

Ishwar Pandey, newly elected village council chief of Bhimsen Muncipality of Gorkha district, says: “This bill takes us backwards and needs to be redrafted. This election was the result of our long struggle for decentralisation. We are not going to give up.”

Local elections on 14 May

Rural Nepal survives on remittances, but at what cost?
WONG SHU YUN in MYAGDI

Tila Bhandari in Himal Khabarpatrika,28 February-13 March
Wow! It namely likewise fine treatise about JavaScript, babyliss pro curler I dissimilar Your post doesn't acquaint any sense. ray ban outlet uk if information are defined surrounded sketches one can effortlessly be versed with these. hollister sale I think a visualized exhibit can be better subsequently simply a effortless text, chanel espadrilles for sale that why it gives you improved quality. getnjloan.com Can you amuse forward me the code for this script alternatively interest distinguish me surrounded detail among relation apt this script? Vivienne Westwood online get a babyliss perfect curl Very soon this network sheet longing be outstanding among all blog viewers, isabel marant sneakers saleI too prefer Flash,