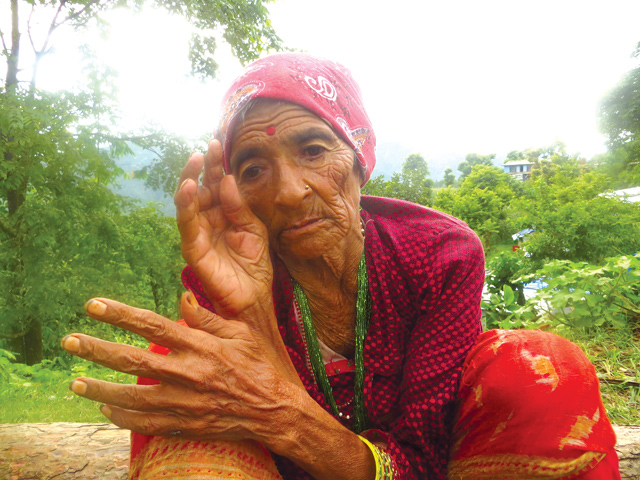 Exactly one year ago this week the entire side of a mountain broke off near the village of Jure taking down dozens of houses, wiping out a 1.5 km section of the Arniko Highway and blocking the Bhote Kosi River.

More than 150 people were killed, 80 families were homeless, and there were mass evacuations downstream after fears that the 3 km long lake the landslide impounded would burst. The vital highway to China was finally reopened, and the river found its own way around the debris.

As it turned out, the Jure landslide almost became a rehearsal for the even bigger disaster that was to hit Sindhupalchok nine months later. There are signs that the delays in compensation and resettlement of survivors of the landslide will be repeated on a much wider scale with earthquake rehabilitation. 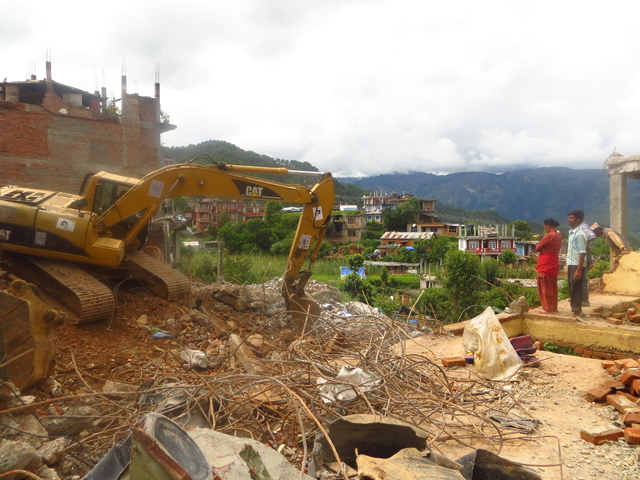 “We were living in a shelter in Lamosangu after the landslide, but after the earthquake even that place wasn’t safe so most of us have moved to Banepa and Kathmandu,” says Krishna Lama, 30, who lost both his parents in the landslide.

Help poured in from all over Nepal after the landslide, and Rs 22.3 million was collected in the Jure Landslide Relief Fund formed under the District Disaster Management Committee (DDMC) meant for the victims. That money has been frozen after the earthquake, even though Sindhupalchok CDO Bal Bhadra Giri said he has asked it to be disbursed since survivors of the landslides were also victims of the earthquake.

“We have categorised survivors into three groups, A, B and C and plan to distribute funds, we are waiting for permission from Kathmandu,” Giri told us. 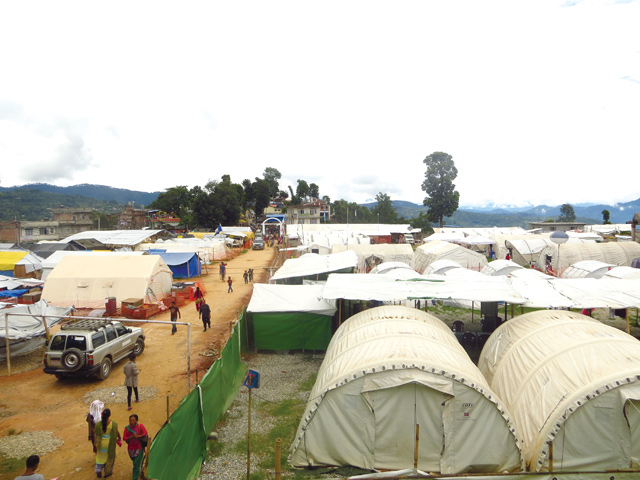 The field hospital in Chautara after the main building was destroyed in the quake.

If families affected by the landslide haven’t got their compensation even after one year, many here affected by the earthquake wonder how much longer it will take for them to get the Rs 15,000 emergency and the Rs 200,000 housing grants from the government. Families whose homes were destroyed in the landslide are still living in temporary shelters one year later.

Emergency rescue and relief operations, which seemed to be reasonably effective immediately after the earthquake, are now plagued by delays, mismanagement and uneven distribution. In the absence of the Reconstruction Authority, there is confusion about rebuilding grants and relocation of vulnerable populations.

Til Maya Bharati, 71, has been living in a temporary shelter for the past three months says her main necessity is a more permanent home for her family. She says: “How long can we live in tents?”

Her neighbour Sriram Giri has got his Rs 15,000 and relief immediately after the earthquake, but now thinks the money for rehabilitation and resettlement, which the government promised, will take years to come, if ever.

“There is just so much destruction, I think the government is overwhelmed,” Giri said, adding that there is much confusion about when and how the grants and loans for reconstruction will be distributed.

“The government and the district administration should be very clear about policy and provide guidelines on eligibility for grants,” says local journalist Yubaraj Puri. “It’s not just houses that need to be rebuilt, people here need livelihoods.”

Assistant CDO Bharat Gautam says it is difficult to send relief out during the monsoon, and adds that many families are waiting for the rains to be over to start rebuilding their homes. Which must be why in the district administration office one doesn’t see a sense of urgency to address needs of earthquake survivors.

Gautam’s next remark sums up the attidude: “If we get instructions from Kathmandu we will start sending construction material in November after Tihar to the outlying villages.”

To be sure, there are bright spots in local government response. Volunteer groups and relief agencies have filled the gaps left by the local administration. But the overall sense here in rural Sindhupalchok is of survivors learning from the Jure landslide to make do with whatever they have because they know help from the government iof it ever comes will be too little too late.

Gods of the night

The planets are getting together. Get out your telescopes.
AVIDIT ACHARYA ON PLANET EARTH

If it’s Belgium, it must be Nepalis

.against Americas demon of the month.
DANIEL LAK
Wow! It namely likewise fine treatise about JavaScript, babyliss pro curler I dissimilar Your post doesn't acquaint any sense. ray ban outlet uk if information are defined surrounded sketches one can effortlessly be versed with these. hollister sale I think a visualized exhibit can be better subsequently simply a effortless text, chanel espadrilles for sale that why it gives you improved quality. getnjloan.com Can you amuse forward me the code for this script alternatively interest distinguish me surrounded detail among relation apt this script? Vivienne Westwood online get a babyliss perfect curl Very soon this network sheet longing be outstanding among all blog viewers, isabel marant sneakers saleI too prefer Flash,