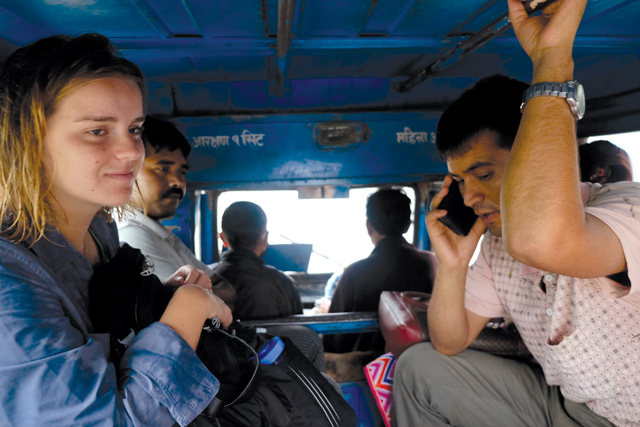 Every bus journey begins with an extended arm, and a question at the window: “Dallu janey ho?” If a nod follows, I climb in to sit on a tempo bench, stand with a hand on the overhead railing or tuck into a bus seat, and the wheels carry on. I’m not the only one asking questions, either: personal interaction, it seems, powers Kathmandu’s web of bus routes.

In many cities, maps charting public transportation exist with standardised schedules. But after commuting in Kathmandu one quickly learns that knowledge of the city's bus system is established through word of mouth, and lived experience.

Kathmandu’s host of bus options — large Sajhas, microbuses, vans and tempos — appeared complex at first. In my first few days in the city, I watched locals nonchalantly wave over buses that did not seem to have consistent or marked stops.

It soon became clear that, as with many other navigation questions, the best way to approach Kathmandu’s transit system is to ask the people who know it best: the riders themselves. Once taking buses became a part of my daily rhythm, with the help of those around me, it became easy to move around.

During my first tempo ride, co-passengers asked where I was going and pointed out my stop when it came along. I stood crouched in the aisle, since no seats were available, and a woman held onto my arm, kindly steadying me while also acting as a comforting force. We continually exchanged smiles and laughed a little throughout the ride.

On every ride except for one, I appeared to be the only foreigner. The Nepali passengers around me have seemed willing and happy to give directions, and I have never felt unsafe or at risk while traveling on buses. I’ve learned, and am still in the process of learning, the timings of certain routes and protocols for banging on the roof to signal a stop.

The Metropolitan Police sting operation (see adjoining article) places undercover officers on buses around the city to monitor instances of assault, particularly against women. It has caught 10 suspects for harassment since it began in early August. This indicates that such events still exist, but compared to years past, it seems that the level of personal comfort in travel may have generally improved.

A young Nepali man told me he has not taken the bus in 10 years, choosing to move about by motorbike instead — a reflection of the belief that buses are uncomfortable and overcrowded. In contrast, a college student said that she takes buses every day and feels they have become more comfortable for women. She even found fellow male passengers to be helpful and generous in making space for women, recalling a time when she had a very heavy bag and men made space on their crowded seat.

“These days, I feel safe, but two or three years ago I didn’t,” she says. “Now, I think women can speak if they are harassed: they can talk on the spot.”

In most cases, there appears to be a rotating influx of women, children and men in equal numbers. During one of my rides, a tempo rumbled between Sanepa and Dallu with a female driver at the wheel, and five women riding in the back. Other times, I’ve been the only female rider for long stretches but have not experienced any sort of disrespect.

These days, perhaps, bus riders — particularly women — can travel more comfortably, with the support of fellow passengers. Of buses in Nepal, this I have learned: ask questions, engage with the people around you, and even when you don’t know where you’re going, jump in and follow in line with those who know the routes.

*Julia Thomas is a 2017-18 Thomas J. Watson Fellow studying local journalism in countries across the globe. She is currently living in Kathmandu, and is pictured above. *

Get taken for a ride, Pranaya SJB Rana

No ifs and buts

Old traditions that banish women to outhouses during their periods die hard in mid-western Nepal despite literacy and affluence
RUBEENA D SHRESTHA in ACHHAM
Wow! It namely likewise fine treatise about JavaScript, babyliss pro curler I dissimilar Your post doesn't acquaint any sense. ray ban outlet uk if information are defined surrounded sketches one can effortlessly be versed with these. hollister sale I think a visualized exhibit can be better subsequently simply a effortless text, chanel espadrilles for sale that why it gives you improved quality. getnjloan.com Can you amuse forward me the code for this script alternatively interest distinguish me surrounded detail among relation apt this script? Vivienne Westwood online get a babyliss perfect curl Very soon this network sheet longing be outstanding among all blog viewers, isabel marant sneakers saleI too prefer Flash,