Under the new draft bill, it would not be possible to write this column 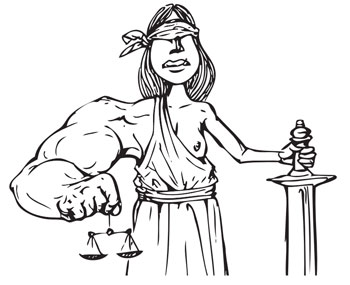 The Contempt of Court Bill submitted to the legislature parliament earlier this month by the NC-UML ruling coalition has come under fire from lawyers and journalists. Minister of Law and Justice, Narhari Acharya, who is the chief architect of the Bill, defends it saying it will streamline and clarify current rules on coverage of the judiciary.

The Bill has defined what constitutes contempt of court: insulting the judgement of a court or judges, obstructing the implementation of justice, influencing cases that are subjudice, and recording of courtroom activity without permission from the court. Anyone found guilty of contempt of court can be sent to jail for one year and fined up to Rs 10,000, or both.

Critics are suspicious of the Bill because it came after strong media criticism of Acharya’s support for the nomination of eight new judges to the Supreme Court in May, some of whom were allegedly tainted. Acharya, who is also one of the members of the Judicial Council, is said to have prepared the draft of the bill on contempt of court in consultation with fellow members and several other judges.

A Contempt of Court Act, media freedom activists say, would seriously curtail freedom of expression guaranteed by the constitution. The Bill appears to have been hurriedly drafted with the intention of rushing it through the legislature to muzzle the media. Most countries have Contempt of Court laws, but if it is used to restrict the ability of journalists to write on the wrongdoings of judges, then the reputation of the judiciary itself will suffer. In a country where there have been frequent exposés of corrupt judges, stifling such investigative reports would undermine democracy.

In any democratic framework, the judiciary can be subject to the same level of scrutiny as the parliamentary and executive branches. Section 4 of the Bill in particular must be reviewed before it is passed by parliament. It says undermining the public trust of the judiciary can lead to a contempt of court charge. This provision is vague and can be misused against anyone. It says spreading misleading information about court proceedings can come under contempt of court, but ‘misleading’ is not defined thus opening up the media to selective witch hunts.

Section 4 (d) provides excessive protection to judges and could inhibit the media from exposing instances of judicial corruption. Similarly section 4(h) says that media houses can be charged if they publish any information on restricted cases. But it has not defined on what grounds the court can restrict cases. Under these rules, this column would be considered a contempt of court.

Section 13 which defines the sanction must be reviewed. The objective of the Contempt of Court Act should be to uphold the authority and impartiality of the courts, but this is not protected or commanded. Rather it is earned by safeguarding the fundamental rights of citizens. The role of media is to expose biased verdicts with evidence, not to protect the dignity of court. The respect towards judiciary and justices must come spontaneously, they shouldn’t seek enforced silence from the media.

Another provision in the legislation is the one-year prison term for infringement which is excessively severe. The purpose of the imprisonment and fine in the contempt of court is symbolic: a warning not to abuse freedom of expression. The court and the justices cannot take advantage of charges of contempt of court to ensure their dignity by forcing journalists not to write.

Journalists must be accountable for what they write but shouldn’t be threatened by justices in the name of maintaining the dignity of the judiciary. They must own respect but what they are doing is seeking forceful respect through the new act. If the parliament passes the proposed bill on the same grounds, that will contravene many provisions of existing national and international laws.

The main question is the timing of this Bill, closely following the controversial appointment of new justices which came under severe criticism in the media. Discussions on the bill must continue, as should consultation with the stakeholders and it should be reviewed in the context of contemporary laws on freedom of expression, the right to information and other international human rights provisions.

Nepal is awash in cash, but we cant seem to spend it on rebuilding the country.
NAVIN SINGH KHADKA

A poet of ideas

Former UML MP from Salyan, Prakash Jwala, travelled to the midwest to assess the lives of his constituents after the ceasefire.
PRAKASH JWALA
Wow! It namely likewise fine treatise about JavaScript, babyliss pro curler I dissimilar Your post doesn't acquaint any sense. ray ban outlet uk if information are defined surrounded sketches one can effortlessly be versed with these. hollister sale I think a visualized exhibit can be better subsequently simply a effortless text, chanel espadrilles for sale that why it gives you improved quality. getnjloan.com Can you amuse forward me the code for this script alternatively interest distinguish me surrounded detail among relation apt this script? Vivienne Westwood online get a babyliss perfect curl Very soon this network sheet longing be outstanding among all blog viewers, isabel marant sneakers saleI too prefer Flash,