Ruin in the rain 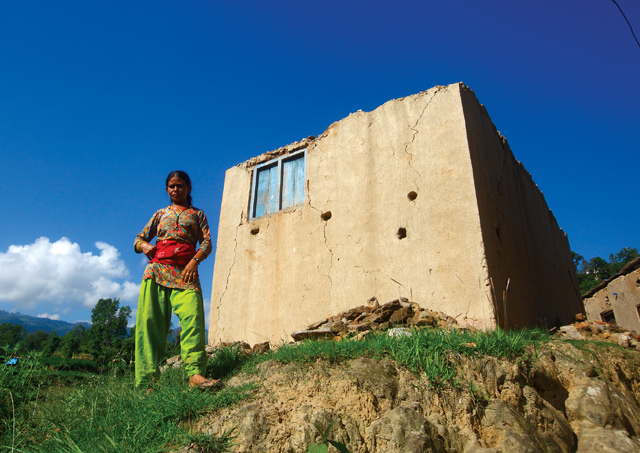 Looking down at the newly-declared municipality of Panchkhal from the Arniko Highway is a sight that has come to define the landscape of the 15 mountain districts affected by the earthquake three months ago. Hundreds of bright spots of light reflect the morning sun off new tin roofs of temporary shelters.

Just off the road in Ward 5 of Panchkhal, 56-year-old Dev Kumari Mijar has been living since April in a hut fabricated entirely of corrugated tin sheets. Her brick home nearby bears the scars of the earthquake and is too unsafe to live in.

“That is where I have been living since the earthquake,” said Dev Kumari, pointing to her shed that has its roof and walls made of corrugated sheets. The Rs 15,000 that the government gave out was not enough, so she had to sell gold ornaments to buy another Rs 10,000 worth of tin. “I don’t know if I can afford to rebuild my house,” she said, adding she couldn’t afford to tear it down either. 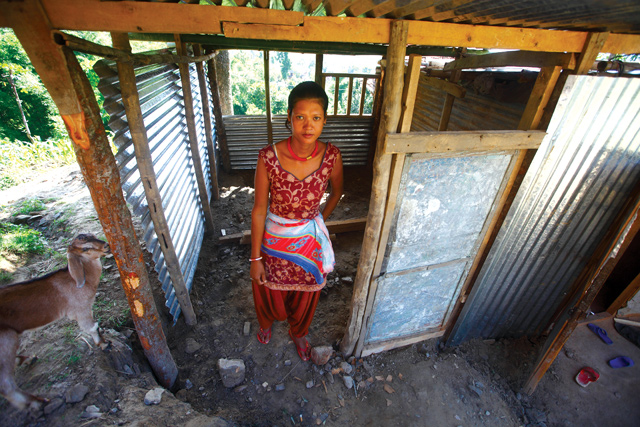 BUILDUP: Kamala Mijar a daily wage earner couldn’t even finish building a temporary shelter as the Rs 15,000 provided by the government was not enough to buy needed material.

Kamala Majir, 29, finally received her Rs 15,000 last month after being given the runaround by local officials. But even that money is not enough to buy roof sheets and timber to build a temporary shelter. As a single mother of a 10-year-old daughter, Kamala cannot even afford to complete her unfinished shelter. Rebuilding her destroyed home is a distant dream.

“I barely save anything from what I earn. I have to send my daughter to school and manage the household,” said Kamala, who started living alone after her husband took a new wife.

Up the hill, 80-year-old Bal Bhadra Majir hasn’t received his Rs 15,000 because his name was not on the list of those made homeless. Wrinkled and gaunt, he lives in a bamboo and tin shelter, looking out at the ruin of what used to be his house which he has no hope of rebuilding.

Kamala Majir sums up the dilemma of many here: “I had to borrow Rs 80,000 to build this bamboo and tin shelter. There is no way I can rebuild my house for another 3-4 years.” 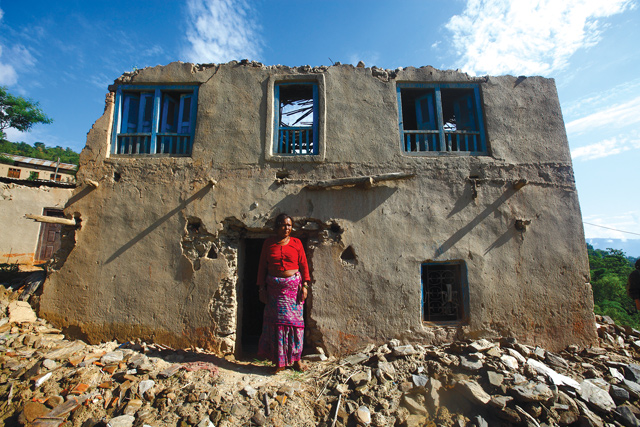 Dev Kumari Mijar stands in front of the remains of her two-storey house. The 56-year old says she cannot rebuild without outside help.

Everyone here has heard that the government has promised Rs 200,000 for those with damaged houses, but they have no idea where they can get the rest of the money. “It would be a great help if the government could hurry up with the grant,” says Dev Kumari Majir, adding, “it would be a start.”

There is a lot of confusion here, as elsewhere, about the mechanism for distributing housing grants. Some have been told the initial Rs 15,000 will be deducted from the larger sum, while rumours are rife that those who have started reconstruction will not get the money. This has led many to keep living in shelters even if they can afford to rebuild. 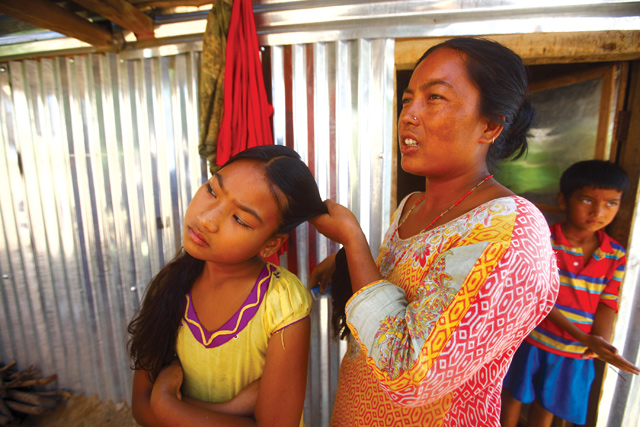 But in the absence of the Reconstruction Authority, the housing grants are in limbo and there is confusion even in various branches of government about how they will be distributed.

“We have already allocated the budget and the policy is in place,” explained Ramsharan Pudasaini, spokesperson for Ministry of Finance, “but the guidelines and the standards for it are still being prepared.”

Another official at the ministry said the money cannot be disbursed unless the Reconstruction Authority has been formed, but insisted that the full amount will be given out in installments and the Rs 15,000 will not be deducted from it.

Split ends of a revolution

The revenge of the radicals

12 June Mahesh Acharya interviewed former Indian ambassador to Nepal, Shiv Shanker Mukherjee in New Delhi.
Wow! It namely likewise fine treatise about JavaScript, babyliss pro curler I dissimilar Your post doesn't acquaint any sense. ray ban outlet uk if information are defined surrounded sketches one can effortlessly be versed with these. hollister sale I think a visualized exhibit can be better subsequently simply a effortless text, chanel espadrilles for sale that why it gives you improved quality. getnjloan.com Can you amuse forward me the code for this script alternatively interest distinguish me surrounded detail among relation apt this script? Vivienne Westwood online get a babyliss perfect curl Very soon this network sheet longing be outstanding among all blog viewers, isabel marant sneakers saleI too prefer Flash,