Bright lights on a dark day

From a health post in Melamchi to the Health Ministry in Kathmandu there was compassion, competence and commitment in treating those injured in the quake
Mark Zimmerman in Sindhupalchok 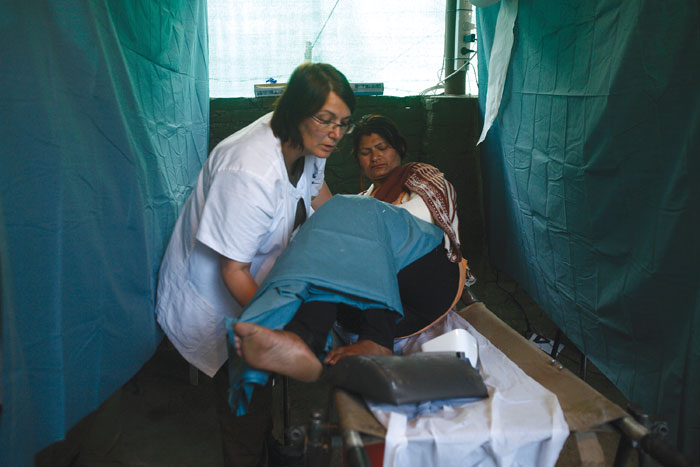 GOPEN RAI
EMERGENCY TREATMENT: An international volunteer helps a patient get on a stretcher bed at a makeshift clinic in the open field of Chhauni Hospital on Friday.
Amidst all the criticism of Nepal’s earthquake relief effort, there are some acts of selflessness and generosity. This isn’t to say that the overall effort has been perfect or even optimum, disasters like this create mayhem even in the most organised societies.

On the day after Nepal’s earthquake, I visited the Health Ministry to ask how our organisation might help. Officials briefly interrupted their meeting to connect me with Khem Karki who asked if we would be willing to assess the medical situation in the village of Ichok in Sindhupalchok. He phoned the local chairperson and told him to expect us, and then moved on to more pressing matters.

The next day, we drove through the devastated town of Sankhu and descended into the Helambu Valley. There was destruction everywhere, 80 per cent of the buildings were either flattened or rendered uninhabitable by fallen walls. We found communities in groups of 5-20 clustered under makeshift roof shelters from pieces scavenged from their destroyed houses. Cooking fires smoked. The scene was eerily quiet. There was the smell of bodies trapped in the rubble.

Further north at the Melamchi Primary Health Center (PHC) there were patients lying on the grassy field in front. Wearing yellow masks were two physicians treating a man who hobbled up with his arm over the shoulder of a friend. A woman sat on the steps while a health assistant scrubbed antiseptic on a wound on her leg. Another woman lay nearby on a tarp while a doctor injected local anesthetic before suturing a gaping wound. Over on the side, patients who’d already been treated lay under three tarps suspended by ropes.

The place looked busy enough and there were some patients with bone fractures. The previous day, they saw 600 patients here some 200 of them so sick that they had to be transferred to Kathmandu – in ambulances, trucks, whatever could be found. Fifty-three were sent to specialist hospitals by helicopter.

Given the severity of the trauma and the immediate rush of patients, these numbers would challenge the staff of even a large city hospital. In this case, an inspired group of a few junior government doctors and paramedics performed their assessments and first aid with rapid efficiency.

There are a number of people living today because of this heroic service. On top of which, the government’s capacity to evacuate so many patients by helicopter was impressive. Back in Kathmandu, there was another encouraging sight. In a hall of the Ministry of Health and Population where there were a bewildering collection of concerned foreigners – wearing colourful shirts and hats with organisation names emblazoned on them, some paramedics in their full work uniforms, speaking many different languages. They had recently landed at the airport and crowded into the hall, straining to hear their first briefing. We counted ten countries among the group of 200 people. It looked like medical chaos was about to break out in Nepal.

That afternoon, there was a second meeting with a smaller group of the foreigners at the Health Ministry. Khem Karki represented the Nepal government and Ian Norton the WHO. Karki gave a clear briefing about the health status and standing facilities of Nepal’s five worst-hit districts.

Both doctors then began to sort the various international volunteers by their capability to help. Some of those in the room had come to Nepal with fully sufficient mobile hospitals – with surgeons, nurses, equipments, and field provisions to feed and house their teams. Others were specialised – such as a group of physiotherapists or a lone emergency room doctor. A woman reported that her team had been turned back by a landslide blocking the road. Karki took note and said that a helicopter would be arranged, how much did the team weigh? “17 tons,” was the reply.

Consider the job of patching together medical assistance for remote areas, using teams of different size and capacity, from different countries, many of whom had never been to Nepal before – it looked daunting. Working as a complementary pair, Norton and Karki gave the guidelines for the volunteers’ work in Nepal. Everyone had to first register and receive temporary medical licenses. Once in the field, they had to fully document all patients treated, particularly those undergoing operations, and these reports were to be sent weekly to the Health Ministry.

There were protocols for handling of bodies, management of medical waste, and for referral centers in Kathmandu, such as for neurosurgery or complicated orthopedics. Eventually, the Health Ministry coordinated the deployment of more than 100 foreign medical teams, which came after the immediate response by the Nepali medical system.

The scene in the tidy hall of the Health Ministry was far different from the dusty field in front of the Melamchi Primary Health Center – but in both, I saw compassion and competence. And in both, genuine commitment. For both groups the leadership came from Nepal’s Health Ministry.

The healing of the 25 April earthquake will require months and years. Many people will suffer for long periods. Along the way, there will be ample confusion, mistakes, and neglect. You may hear stories about lack of coordination or unfulfilled expectations of those who came to help. But there will also be some bright lights of heroism. I hope we can hold these up in the darkness.

Himal Khabapatrika, 14- 28 March
Wow! It namely likewise fine treatise about JavaScript, babyliss pro curler I dissimilar Your post doesn't acquaint any sense. ray ban outlet uk if information are defined surrounded sketches one can effortlessly be versed with these. hollister sale I think a visualized exhibit can be better subsequently simply a effortless text, chanel espadrilles for sale that why it gives you improved quality. getnjloan.com Can you amuse forward me the code for this script alternatively interest distinguish me surrounded detail among relation apt this script? Vivienne Westwood online get a babyliss perfect curl Very soon this network sheet longing be outstanding among all blog viewers, isabel marant sneakers saleI too prefer Flash,