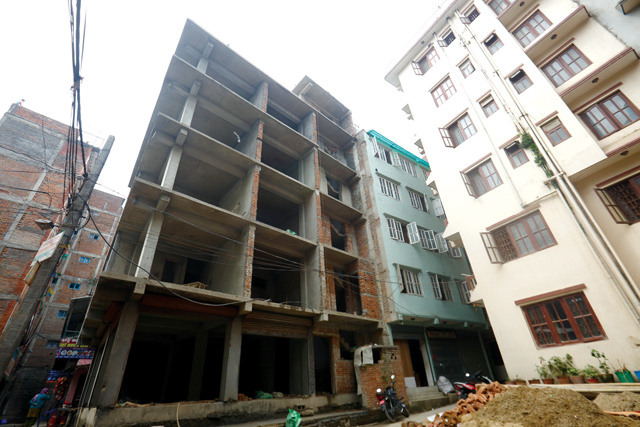 Gopen Rai
PAST, PRESENT, FUTURE: An illegal concrete highrise has sprung up from amidst the ruins of buildings that collapsed in Gongabu in 2015, killing at least 28 in this neighbourhood alone. Engineers say this structure will not withstand the next big earthquake.

Gongabu, the neighbourhood where most concrete structures collapsed in Kathmandu in the 2015 earthquake, is back to business as usual: dancers perform in dimly-lit bars, sex workers wait for clients outside, and migrants from the nearby bus terminal stroll on sidewalks.

But a Nepali Times investigation has found that Gongabu is also back to the illegal construction that resulted in so many fatalities here two years ago.

When the 7.8 magnitude earthquake struck Central Nepal on 25 April 2015, it was mostly brick and clay buildings that collapsed while the majority of concrete structures stayed intact. However, here in Gongabu it was the multi-storey concrete blocks that pancaked, killing 160 people in this locality alone. Most of them were young migrant workers waiting to fly out, and a few were miraculously rescued after a week.

An expose in this paper in 2015 showed that those buildings had weak foundations and the owners had added extra floors illegally after bribing officials.

The area was a Village Development Committee until December 2014, which meant builders here did not need to follow the 1993 construction code. Now, Gongabu is in the new Tokha Municipality, and there are strict guidelines for concrete structures. But only on paper.

Sher Bahadur Tamang’s six-storey building in Gongabu was heavily damaged in 2015. No one died there, but 28 people were killed under the collapsed floors of three adjacent buildings. Rotting bodies were still being pulled out weeks later.

Tamang is now constructing a new five-storey building in the same place (see above) even though the municipality only allowed him a three-storey house, to be built using eight 16-mm rods in each pillar.

Tamang also received the first instalment of the Rs 300,000 housing grant from the National Reconstruction Authority. We confronted Tamang, but he denied he had built five storeys. When he was informed that we have picture of his building, he mumbled: “It’s not just me. Everyone is doing it.”

Bijendra Shrestha, a Tokha Municipality engineer, was surprised to see Tamang’s house this week. “It was meant to be just three-stories, the foundation will not support five floors in the next earthquake,” he told us.

Shrestha says people who do not stick to the approved design will not get a building completion certificate, which means they cannot sell or mortgage the property. But that does not deter those like Tamang who just want to rent floors out, like he did in his previous house.

Others in Gongabu are getting around the code by first obtaining the completion certificate, and then adding more floors.

Shyam Shrestha’s house was destroyed in 2015, and Tokha Municipality allowed him to build just a three-storey replacement. He put up three floors, collected his completion document and promptly added one more storey.

“The earthquake shook people’s houses, but did not shake their mindset,” says Dinesh Pathak, another Tokha Municipality engineer. “They are trying to save some money, but their greed could cost them their lives next time.”

But the government did not investigate and never took action against those who broke the law in Gongabu, Kapan and other Kathmandu suburbs.

“The government’s focus was first on relief, and then reconstruction,” explains engineer Pathak. “If the owners of illegal buildings that killed people had been investigated and punished, maybe they wouldn’t have dared to repeat the same mistake.”

It’s still a zoo out there!

The newly-established Music Institute of Kathmandu strikes the right note for serious musicians.
Wow! It namely likewise fine treatise about JavaScript, babyliss pro curler I dissimilar Your post doesn't acquaint any sense. ray ban outlet uk if information are defined surrounded sketches one can effortlessly be versed with these. hollister sale I think a visualized exhibit can be better subsequently simply a effortless text, chanel espadrilles for sale that why it gives you improved quality. getnjloan.com Can you amuse forward me the code for this script alternatively interest distinguish me surrounded detail among relation apt this script? Vivienne Westwood online get a babyliss perfect curl Very soon this network sheet longing be outstanding among all blog viewers, isabel marant sneakers saleI too prefer Flash,