The one-door policy for flood relief was widely criticised, but it can work if newly-elected local governments take charge
Sahina Shrestha in Chitwan All pics: Sahina Shrestha
Tara Kaji Mahato during her third visit in the village after the floods.

Tara Kaji Mahato is a busy woman. Three months since after was elected deputy mayor, Madi Municipality in Chitwan saw one of the worst floods in recent decades. Although no lives were lost, nearly 200 houses were partially or completely damaged, and settlements had to be relocated.

As she made her way to Dhukurbari on Tuesday morning, local women surrounded her, each wanting to share her woes. This was Mahato's third visit to this village after the floods. The first time she made a list of basic needs, during the follow-up visit she had an organisation in tow with relief materials.

“Why aren’t you in school?” she asks a young girl outside a house. “The flood swept away my books,” the girl answers.

“I’ll bring you books and stationery soon, then you must go to school regularly,” says Mahato, who had brought Dignity Kits for pregnant women she met on her second visit.

In Ratnanagar, Anita Rai, 13, brings out books and notebooks she managed to salvage after the flood, placing them to dry on a clothesline. “I haven’t been to school since the flood because all my books were damaged,” says Rai whose remembers the water reaching her chest. He parents started tying down their beds and belongings, but the first thing she did was store her books in a higher place. But even that was not high enough and the sixth grader lost more than half her books. 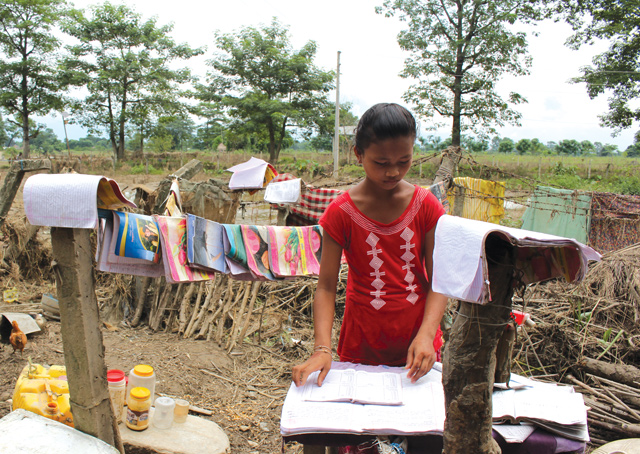 Anita Rai brings out books and notebooks to dry on a clothesline.

“My friends are in school because they have concrete houses and their uniforms and books were saved,” she says.

On Monday, three organisations handed over needed relief materials to the flood victims in the village, in coordination with the mayor and deputy mayor of the municipality. UNICEF had brought water buckets, mugs and blankets for the children, Sapana Village Foundation came with notebooks, stationery, bags and uniforms and Ratnanagar Chamber of Commerce and Industry donated mosquito coils and phenyl to maintain hygiene.

“This is to ensure that there is no manipulation or duplication in relief distribution,” says Bhatta. “We need to identify and reach the right people for effective distribution of aid. With local representatives in place, it is easier to do it. They are more responsible and accountable as they know the people and the area.”

Local leaders say the policy has been effective. “The best part about this is people get what they need and nothing goes to waste,” says Bharat Gurung, chairman of Ward 6, Madi Municipality. “What is the use of giving people quilts when they need rice?”

“The one-door policy has really been very effective in Chitwan,” says Anita Dahal, Chief of the UNICEF Office in Bharatpur. “Since the local elected leaders are in place, there is better identification of those who need supplies, and therefore more effective targeted distribution of the relief materials being brought in through various organisations and individuals."

This is in sharp contrast to Rautahat, one of the worst-hit districts, where the lack of elected representatives at local level is slowing down relief distribution, which is being led mainly by private organisations.

“Sending employees to the field for emergency work is not ideal,” says Umesh Basnet, local development officer for Rautahat. “If we had local council members to count on, reaching those truly affected would be much easier and effective.”

Data collection and duplication of aid is a challenge for the Rautahat administration. People in joint families tell officials they have been separated, but with no one in the ward offices there is no way to certify or disqualify these claims.

Back in Chitwan, the victims have had to be more careful at trying to deceive local leaders. On a recent visit to Wodara, a woman claimed she hadn’t received any aid but her lie was caught when the local leader arrived and started cross-questioning her.

While there are still places they haven’t been able to reach because roads were damaged, local leaders here continue trying to deliver aid. They say this is an opportunity to work for the people and help regain communities' trust.

“Even if she can’t bring anything for us, I am glad she at least visited us,” says Tirtha Kumari Lamichhane of Dhukurbari, after deputy mayor Mahato had left. It was the last day to register nominations, when Tara Kaji Mahato finally gave in. She resigned from her job as an office assistant at the Village Development Committee and registered as a nominee for Madi Municipality's deputy mayor's post.

Initially when she heard that she had been given the 'ticket' from UML to contest in the local elections, she had gone to the district office to protest. There were no elaborate election campaigns and yet, when the votes came in, she beat her nearest opponent by 850 votes.

"You do not have to be a life-long political cadre to win the elections, all you have to have is a proven track record of having done good work and helping people," says Mahato of her victory.

For those in the cities with mayors whose first priority was to buy and ride luxury cars, Mahato is a breath of fresh air. She walks almost everywhere, asking for lifts if traveling far and using the office vehicle, which she shares with the mayor, only for official purpose. "

"When you travel by car, you reach your destination but lose out on the chance to meet and talk to people," she says. "Moreover, we should not be wasting money in buying luxuries for ourselves but we should use that money for the development of the place," she adds.

Before becoming the deputy mayor of Madi Municipality, Mahato worked closely with the people in her community. As a village facilitator for Decentralised Action for Children and Women program under UNICEF, her main focus was the rights of women and children. "Having worked for over 12 years, I know the issues that plague the women and children here and I will continue to work for their betterment," she says.

Since this month's devastating flood, she and other local representatives have been busy collecting data and distributing aid. "As a local representative chosen by the people we have an added responsibility towards them and we need to work for them. When you have worked so long in the community, you come to love the people there and strive to make their lives easier."

Saved by the bell Jogendra Raj Giri (pic, above) was sound asleep when he received a phone call from his daughter in Australia at 11.45pm. It had been raining the entire day in Sauraha of Chitwan, and people were talking about the probability of floods. But till bedtime at 8pm, everything seemed normal.

“Daddy, where are you? There is news that the Rapti River flooded. Please be careful,” said his daughter, who had seen warnings issued on social media and had called to check on her father. A driver for Nepal Red Cross Society’s Disaster Management Department, Giri, 50, was in Sauraha on a work trip.

When he went to check outside, he saw that the water had covered the bottom half of the vehicle. He got it to a safer place and started calling for his employers, who were still sleeping.

“The water level must have reached eight or nine feet,” says Giri. “We were too scared to sleep so we stayed up all night. The water receded only around 5 pm the next day."

While it was difficult to gauge the extent of damage at night, in the morning Giri saw people trying to salvage grains and kitchenware. “Those with mud and bamboo homes had it worse than the others,” he recalls.

Giri is glad to be alive and says, “The government has spent a lot to put the flood warning system in place and it is a good initiative, but maybe now they should think about getting the messags to people more efficiently and on time.”

Dont try to tell me that a highly-speculative hype-driven micro-economy will bring prosperity to South Asia.
DANIEL LAK

The east is east, and west is west

Forty years after it was first conceived, the East-West Highway may finally link Nepals far west into the national mainstream.
HEMLATA RAI IN DHANGADI

Economists please explain why we cant change the exchange rate with the Indian rupee
ARTHA BEED
Wow! It namely likewise fine treatise about JavaScript, babyliss pro curler I dissimilar Your post doesn't acquaint any sense. ray ban outlet uk if information are defined surrounded sketches one can effortlessly be versed with these. hollister sale I think a visualized exhibit can be better subsequently simply a effortless text, chanel espadrilles for sale that why it gives you improved quality. getnjloan.com Can you amuse forward me the code for this script alternatively interest distinguish me surrounded detail among relation apt this script? Vivienne Westwood online get a babyliss perfect curl Very soon this network sheet longing be outstanding among all blog viewers, isabel marant sneakers saleI too prefer Flash,