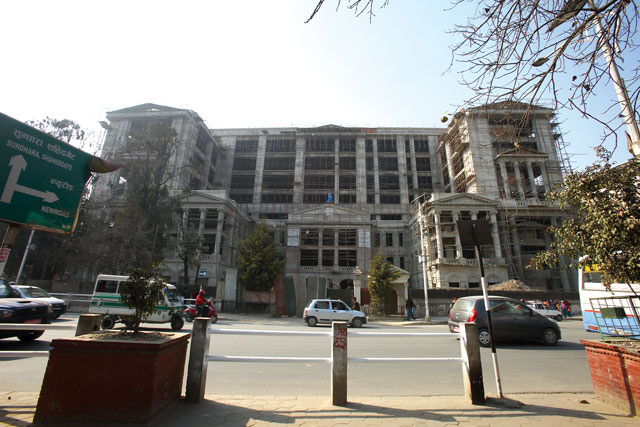 SYMBOL OF SACRIFICE: The statue of Prime Minister Dhir Sumshere Rana in front of the newly-built Tri-Chandra Military Hospital in Kathmandu in 1925, which was Britain’s gift to Nepal for the sacrifices of Gurkha soldiers during World War I.

Of the 90,000 Nepali soldiers sent to fight in the First World War, 20,000 never returned. Many more were wounded. As a symbol of gratitude for that sacrifice, Britain used its Post-War Reconstruction Fund to help build the Tri-Chandra Military Hospital in Kathmandu.

The imposing neo-classical structure impressed Perceval Landon, who wrote in his book Nepal that even architects in Calcutta were envious of Kathmandu. For 85 years after it was built in 1925, the statue of the marching soldier atop the hospital became an iconic part of the Kathmandu skyline.

Just before the 2015 earthquake, however, the Nepal Army started demolishing the building, saying it was going to replace it with a modern, bigger non-profit hospital with the same name, for the treatment of serving personnel, veterans and civilians.

Nepal Army sources told us the new building was never intended to be a hospital — that was just camouflage. “Even now, they have added the clinics so that there won’t be any allegations that the Army is getting into the real estate business,” said the source.

The construction was financed with a Rs2 billion investment from the Army Welfare Fund, which is made up of contributions from, among others, the salaries of Nepal Army UN peacekeepers in war zones around the world. The Fund currently has nearly Rs40 billion in savings, which it uses in health, education and charity work and housing for retired soldiers.

Army spokesperson Nainraj Dahal admits: “The main military hospital is in Chhauni, and it was appropriate to use the building in the city centre for commercial purposes to generate revenue for the Fund.” 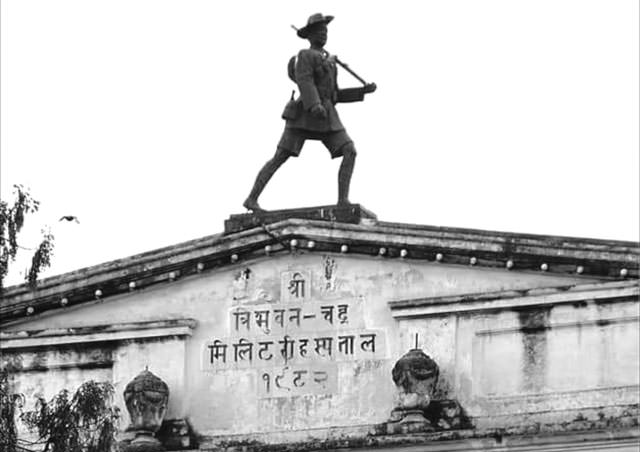 The iconic statue of the marching soldier on top of the building that was demolished in 2014 to make way for a controversial nine-storey commercial building that is nearing completion (below). 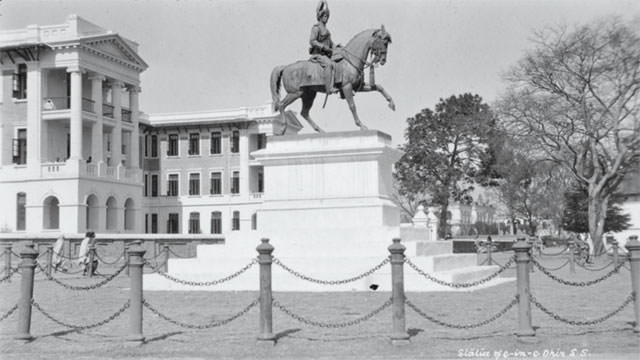 The Army hasn’t complied with existing rules on building permits from the municipality. In fact, it never bothered to get necessary building design approval. When construction started, the municipality wrote to Army Headquarters and the Defence Ministry twice, but the letters were ignored. “They didn’t even verbally acknowledge our letters,” recalls Ram Bahadur Thapa of the municipality’s Building Permits Office.

To be sure, some military structures do not need approvals because their designs are classified for security reasons. But a hospital in the middle of the city need not have been shrouded in such high secrecy. However, the basic dimensions of such buildings require formal consent from the municipality. Any new structure also needs a completion certificate from the city for electricity, water and other utilities, which the Army hasn’t bothered to acquire either.

The Nepal Army has also violated the building code, which excludes structures taller than five floors in the congested city core. The military’s commercial complex is nine stories high with basement parking. Says Thapa: “Because the Army is getting away with it, others putting up illegal structures are saying, 'you punish the Army first'.”

The new building was originally designed to be 14 stories, and the foundation was laid accordingly. But when the 2015 earthquake struck during construction, the design was scaled down, the Army says, because it did not look commercially viable.

We asked Ram Bahadur Kunwar of the Department of Archaeology how such a historic building was allowed to be pulled down to make way for a mall. His reply: “We found out only after the hospital was demolished.”

The Army’s construction also needs an emergency response plan, according to new zoning and safety guidelines for public buildings drawn up by the Local Development Ministry after the earthquake, which it does not have.

Says advocate Srihari Aryal of Transparency International Nepal: “It was bad enough to bring down a heritage structure, but it is a complete no-no to build a commercial complex in that space. Unilateral decisions like this by the Army also weakens democracy.”

"We aren’t worried about a big US presence in Nepal."

Indian Ambassador Shyam Saran in Himal Khabarpatrika, 31 December - 14 January
Wow! It namely likewise fine treatise about JavaScript, babyliss pro curler I dissimilar Your post doesn't acquaint any sense. ray ban outlet uk if information are defined surrounded sketches one can effortlessly be versed with these. hollister sale I think a visualized exhibit can be better subsequently simply a effortless text, chanel espadrilles for sale that why it gives you improved quality. getnjloan.com Can you amuse forward me the code for this script alternatively interest distinguish me surrounded detail among relation apt this script? Vivienne Westwood online get a babyliss perfect curl Very soon this network sheet longing be outstanding among all blog viewers, isabel marant sneakers saleI too prefer Flash,