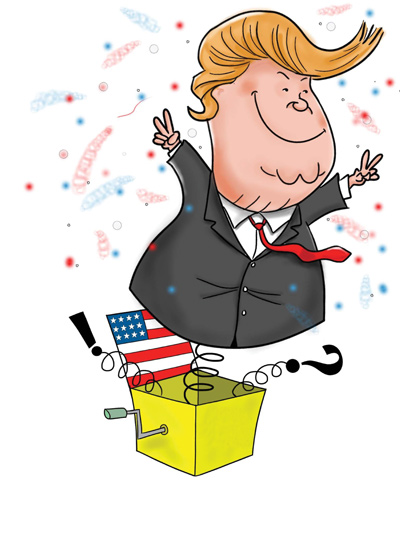 Donald J Trump’s victory in the US presidential election this week shocked Americans and sent shock waves across the world. Here in Nepal, it had analysts scratching their heads about what it means to Nepal, especially the country’s tight balancing act between India and China.

Will President Trump really follow through on his threats to deport illegal migrants, and how will it affect the US administration policy on those seeking political asylum, like the Bhutan refugees?

Trump’s disdain for human rights, his seeming sympathy for Russian President Vladimir Putin and criticism of Barak Obama’s Asian Pivot doctrine vis-à-vis China could dramatically change America’s place in the region. Despite his closeness to Obama, Indian Prime Minister Narendra Modi was one of the first to greet Trump with a warm-hearted message. Some Hindu Indian-Americans were vocal supporters of the Trump campaign.

Analysts say an unpredictable change in the US foreign policy could affect the political economy of East Asia and the Gulf where 2.5 million Nepalis work and send remittance home. What makes some nervous is quickly spreading Syria-Iraq conflict, dragging Saudi Arabia and Iran into the fray, and destabilising the region.

“The direct implication of Trump’s victory will be his policy towards migrants and refugees,” says Nischalnath Pandey of the Centre for South Asian Studies. “But what his approach will be towards India and China will also have consequences for Nepal.”

Aside from strategic implications and foreign policy, there is also worry about what impact an inward-looking America will have on the US official development assistance and funding of the United Nations and non-governmental groups. The US has been one of Nepal’s major development partners for over 60 years with investment in health, education, food security and post-earthquake reconstruction.

Trump’s win has fueled speculation that the US will cut down on development aid across the world, especially given his vocal ridicule of climate change, which he has repeatedly called a “Chinese hoax”.

Bikram Rai
LOSING THE LOTTERY: Nepalis are worried what will happen to the US Diversity Visa lottery under the Trump administration.

Bhaskar Koirala of the Nepal Institute of International and Strategic Studies says Trump’s pitch to the American electorate has been to make ‘Make America Great Again’, for which his administration would seek to avoid unnecessary and unproductive engagements, including diverting its resources.

“We can expect a scaling down of aid and a re-engagement on traditional bilateral relations that feature more regular high level visits and exchanges and a focus on business promotion between the two countries,” Koirala says, adding that Nepal could assume greater importance under Trump because of its geo-strategic location between India and China.

Trump’s victory has upset liberals world over, and comes at a time when Nepal itself is debating amendments in the new Constitution to meet demands from Madhesi and other groups on federalism, citizenship and electoral rules.

There has been an outpour of nationalist rhetoric in the past week after an unofficial Constitution amendment bill that seemed to be aimed at enabling naturalised Nepali citizens to be eligible for the posts of President and Speaker. Nepal, too, appears more divided than ever before, like Trump’s America.

The long way to the promised land, Ayesha Shakya

Why every disaster becomes a money spinner
ARTHA BEED
Wow! It namely likewise fine treatise about JavaScript, babyliss pro curler I dissimilar Your post doesn't acquaint any sense. ray ban outlet uk if information are defined surrounded sketches one can effortlessly be versed with these. hollister sale I think a visualized exhibit can be better subsequently simply a effortless text, chanel espadrilles for sale that why it gives you improved quality. getnjloan.com Can you amuse forward me the code for this script alternatively interest distinguish me surrounded detail among relation apt this script? Vivienne Westwood online get a babyliss perfect curl Very soon this network sheet longing be outstanding among all blog viewers, isabel marant sneakers saleI too prefer Flash,