Dahal has been trying to remake himself as a pragmatic politician, but has come across as a flip-flopper. 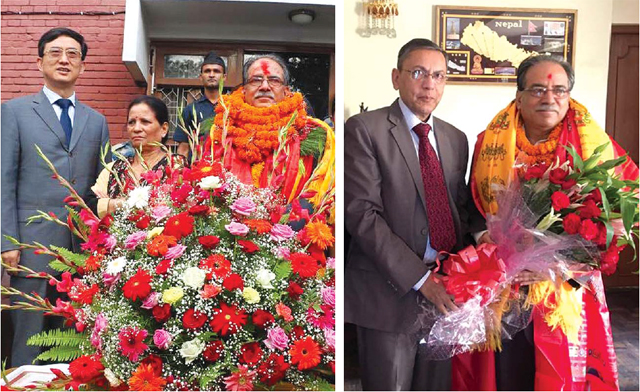 Taking his oath of office as Nepal’s 39th prime minister for the second time on Thursday, Maoist leader Pushpa Kamal Dahal refused to swear in the name of God.

He does not have the same charisma and swagger he demonstrated in 2008, when he went from being a guerrilla commander to a prime minister elected in a landslide victory. In the last ten years since the end of the conflict, he has been trying to remake himself as a pragmatic politician, but has come across as a flip-flopper.

This time, Dahal has only nine months to show that he is a leader to be reckoned with in future elections, as he has to give up his position to Sher Bahadur Deuba of the Nepali Congress next year. It will be an uneasy alliance with the NC, and Dahal will also have to get the economy back on its feet after the devastation of the earthquake and the Indian Blockade.

Equally challenging will be maintaining an equilibrium in relations with China and India. It is an indication of the importance both neighbours attach to relations with the buffer state that they raced to greet Dahal on Wednesday.

First off the mark was Indian Prime Minister Narendra Modi, who called Dahal to congratulate him immediately after the vote in Parliament. Chinese Ambassador Wu Chuntai drove up to Lazimpat to offer Dahal flowers and, not to be outdone, Indian ambassador Ranjit Rae followed soon after, with a bouquet of his own (pictured above).

Dahal will find it difficult to live down the perception that his partnership with the NC was designed in New Delhi. KP Oli, whom Dahal helped install as PM last year and then deposed last month, is already playing the nationalist card by insinuating that India was not happy with his overtures to China during the Blockade.

“The first pillar of our diplomacy is to maintain a balance between India and China,” says Madhu Raman Acharya, Nepal’s former permanent representative to the UN. “Dahal’s diplomatic success or failure will be measured by whether he demonstrates mature understanding of this sensitivity.”

Acharya says Beijing will show the same degree of proximity with Dahal as with Oli, but Dahal will have to be careful not to irritate India by delaying a resolution of the Madhes issue.

Along with Dahal, five ministers — two from the NC and three from the Maoists — were sworn in by President Bhandari on Thursday. Dahal has agreed to keep eight ministries for his party and allot 13 berths for the NC.

Dahal will face difficulties over the coming weeks to choose ministers from his recently unified party as well as the Madhesi and fringe parties. He has just 10 ministerial positions to dole out, and too many aspirants.

Remember what worked, and just do it
BIHARI K SHRESTHA

City life is getting much worse than country life
CK LAL

When was the last time we had real governance?
ARTHA BEED
Wow! It namely likewise fine treatise about JavaScript, babyliss pro curler I dissimilar Your post doesn't acquaint any sense. ray ban outlet uk if information are defined surrounded sketches one can effortlessly be versed with these. hollister sale I think a visualized exhibit can be better subsequently simply a effortless text, chanel espadrilles for sale that why it gives you improved quality. getnjloan.com Can you amuse forward me the code for this script alternatively interest distinguish me surrounded detail among relation apt this script? Vivienne Westwood online get a babyliss perfect curl Very soon this network sheet longing be outstanding among all blog viewers, isabel marant sneakers saleI too prefer Flash,