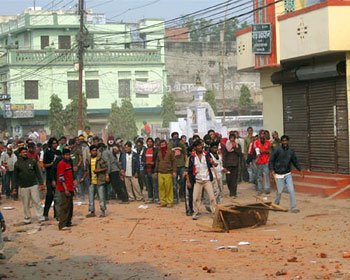 Leaders of Nepal’s Muslim community have repeatedly said that they don’t want to be a part of a future Madhesi province. There is tension just under the surface between Muslims and Madhesis, and the state is mainly to blame for playing divide and rule.

Ekrar Ahmed of the Nepalganj Dhamboji Masjid says, “All riots here are politically instigated, building on simmering tensions on the ground.”

An investigation into the background of the worst flareup of communal tension here in December 2006 reveals a pattern of a volatile mixture of politics and religion taken to combustion point.

Banke district is home to people Hindus, Muslims, Buddhists, Shikhs, Christians who have always lived in harmony. But in the last few years the conflict between Pahade and Madhesi peoples as well as between Hindus and Muslims have turned violent. They are all an extension of the political disputes, where local leaders have stoked tension to get or show power.

In the winter of 2006, the Madhes movement was at its peak, and there was rift between the hill and plains dwellers. Local politicians poured oil into the fire.

Nepal Sadhbhawana Party (Anandadevi) had announced a Tarai shutdown on 25 December and party cadre armed with iron rods forced businesses to shut down. Four small lodges around Nepalganj Nursing Home on Surkhet Road remained open because they were used by patients. The party cadre vandalised all four hotels which happened to be run by people of hill origin.

There was retaliation against the party cadre, and turned violent by evening. Anul Jeda Salmani was among the many people who were caught up in the riot. “They attacked me because I am a Muslim man from Madhes,” he recalls, “there were Pahade journalists who were taking pictures of me being attacked but none tried to stop it.” 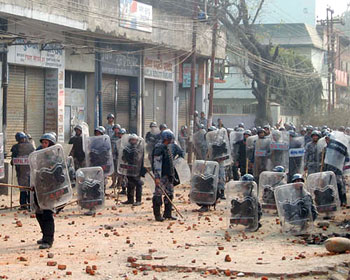 Politicians then seized the opportunity to promote it as a ‘Hind-Muslim’ riot, thus encouraging extremists on both sides to escalate the violence.

A curfew was announced on the morning of 26 December, but the violence continued unabated with looting and vandalism.

Despite the curfew, civil society organised a solidarity rally Nepalganj which reduced tension somewhat. But the violence has important lessons because such politically-instigated riots could easily happen again.

The NSP (Anandadevi) was among the seven main parties back then. It had played an important role during all the major political agreements including signing of the Comprehensive Peace Agreement and the 12- point understanding with UCPN (Maoists). The party demanded that the Interim Constitution have provision for electoral constituencies based on population, geography and culture.

But the Interim Constitution maintained the existing provision of 205 electoral constituencies. The party therefore called for the Tarai shutdown. What started out as an anti-Pahade agitation soon took on an anti-Muslim character.

Communal riots were unheard of in Banke until the early 1990s. After the demolition of Babri Masjid across the border in Uttar Pradesh in 1990 by the BJP, there was some animosity brewing between Nepalganj’s Muslims and their Hindu neighbours. Current Prime Minister Sushil Koirala’s house in Nepalganj had eben vandalized by local Muslims at the time. The communal tension in India had an effect in Nepali border towns as well.

Hindu extremism has also grown in Banke as it has across the border. There were representative from Banke at the central level of the World Hindu Federation’s international committee. Furthermore, India’s RSS also established an office in Banke to mobilise Hindu youth. This had the effect of radicalising the Muslim community as well, and both try to have shows of strength on the streets. These rival groups were the most active in December 2006. Most of the organised arson and looting was targeted at Muslim neighbourhoods with fruit carts, shops and factories vandalized. Mosques were also attacked, and even the Sikh Gurudwara was not spared.

Some human rights activists and locals were shared video clips of the arson and looting through social media, which spread terror outside Nepalganj. Some of the photos that were being shared through social media and mobiles further aggravated the violence.

The police patrolling around the town couldn’t stop what was happening and had to ultimately resort to using force. While the shops at BP Chok were being vandalised, Banke’s Chief District Officer (CDO) Tilakram Sharma and the district police chief Ramesh Bhattarai stood by watching the city burn from the municipality office. When the police did act, it made things worse. The arrest of some Madhesi activists further escalated the riots.

After the violence a Hindu businessman sold his hotel and moved out, and the relations between Pahade and Madhesi, and Hindus and Muslim neighbours were deeply scarred.

Since a lot of Hindus were attacked they became internally displaced within Nepalganj. The Pahade community of Tejnagar, Waterpark areas were forced to move towards northern Nepalganj in search of safer neighbourhoods.

Kamal Rimal who was killed during the police firing was promised Rs 1 million as all other ‘martyrs’ of the 2006 people’s movement. Several others who were badly injured including Sudhir Lakher, Mohammed Nadir Kha, Ramdulare Baisya, Raju Barma were told they would be provided with support for treatment. Some 52 houses were destroyed and looted. Eight years later, no one has got any compensation.

The locals had demanded action against the CDO and police chief for their reckless decisions. Mohammed Nadir Kha of Nepalgunj identified sub-inspector Pramod Chhetri at the district police office as the person who shot him. He was never punished. The politicians who sparked off the violence are still indulging in identity and communal politics.

The government formed a probe committee under the leadership of Purushottam Parajuli that investigated the riots. The committee submitted its report, which just gathered dust. The committee’s coordinator, advocate Shalikram Sapkota says: “Local leaders from political parties were responsible for the riot. The failure of the local administration to understand the seriousness of the situation contributed to the tragedy.”

The government’s apathy has meant that the anger and revenge simmers just under the surface. A small spark can set off another conflagration in Nepalganj.