Residents of Kathmandu, the Tarai and Chitwan could have their lives shortened by as much as four years because of foul air 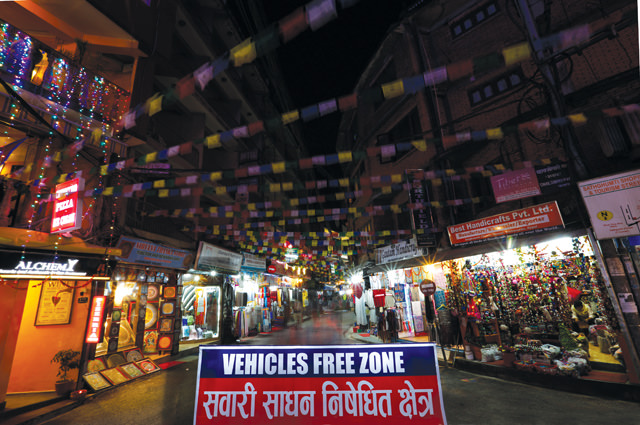 Winter-like weather has come early to Kathmandu Valley this year, and with it the temperature inversion layer that traps pollution. Already in early October, visibility has been so poor that there are massive delays in flights in and out of Kathmandu airport. Suspended dust particles from unfinished road work, increased emissions from the growing number of vehicles and brick kiln emissions in Kathmandu have added to trans-boundary pollution from crop fires and soot particles blown in from northern India by prevailing winds.

A study by the Energy Policy Institute at the University of Chicago last week added proof about how air pollution is shortening the lifespan of people in Asian cities with the dirtiest air. Given that Kathmandu Valley’s air quality is even worse than in New Delhi and Beijing on most winter mornings, this should be cause for grave concern. Residents of Kathmandu, the Tarai and Chitwan could have their lives shortened by as much as four years because of foul air.

In an online survey by Code for Nepal, more than three-quarters of respondents said Kathmandu’s air quality was undermining their health. In written suggestions and responses, some actually said their decision to emigrate abroad was prompted by deteriorating air quality.

Last winter, there was unprecedented public outrage as pollution levels stayed at dangerously high levels for weeks on end. The reason was dust particles from road expansion and building reconstruction. Dust was visible, but the really dangerous pollution was from diesel fumes. In one year, the number of vehicles in Kathmandu has grown from 923,000 to 1,042,000, meaning that this year the concentration of toxic emissions will be even worse.

Kathmandu’s municipalities and Traffic Police have demonstrated they can successfully end drinking and driving and honking and require vehicles to stop at zebras with strict fines. They are planning to do the same now to punish vehicles that spew more than the permissible limit in the exhaust.

“We are now cracking down on air pollution, and have launched a drive to fine vehicles with smoky tailpines. We have fined 80 vehicles in the past week alone,” says Sarbendra Khanal, Chief of the Metropolitan Traffic Police.

The Police have also pedestrianised Thamel’s main streets (pictured above on Wednesday evening), and plan to extend this to congested areas like Asan. Patan and Bhaktapur are also expected to follow suit by restoring car bans on roads leading to their Darbar Squares.

Public anger about poor air quality and worry about its impact on health forced the authorities to act. However, a lot more needs to be done to reduce the number of vehicles in Kathmandu and experts say that will only happen if public transport is made more reliable and convenient.

Sanjay Golchha's Neoteric is working hard to empower individuals
Wow! It namely likewise fine treatise about JavaScript, babyliss pro curler I dissimilar Your post doesn't acquaint any sense. ray ban outlet uk if information are defined surrounded sketches one can effortlessly be versed with these. hollister sale I think a visualized exhibit can be better subsequently simply a effortless text, chanel espadrilles for sale that why it gives you improved quality. getnjloan.com Can you amuse forward me the code for this script alternatively interest distinguish me surrounded detail among relation apt this script? Vivienne Westwood online get a babyliss perfect curl Very soon this network sheet longing be outstanding among all blog viewers, isabel marant sneakers saleI too prefer Flash,