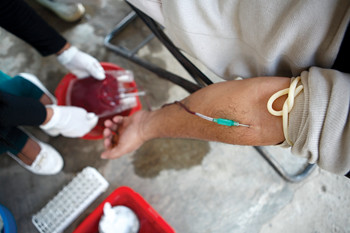 BIKRAM RAI
It’s early Saturday morning and Shankar Ghimire and his son-in-law are the first ones in queue at the blood camp organised by Red Cross Society at Sifal Chaur in Kathmandu.

The 55-year-old director of a pharmaceutical company donates every six months and encourages family and friends to do the same. Unfortunately, there are too few people like Ghimire that there is a chronic shortage of blood in Nepal’s hospitals.

Prem Sagar, 49, is also in line awaiting his turn. He has donated blood 133 times and does so every three months. Today, Sagar has woken up early, skipped breakfast, and given his blood. “Blood regenerates every three months so why not help others with what you have,” he says with a grin.

At Sifal Chaur, blood samples are tested for hepatitis B and C, HIV, syphilis and donors get their blood pressure and history of past donations checked. Earlier, donors used to get a payment for giving blood, but the government banned the practice in 1982. Today a lot of schools, colleges, and businesses conduct their own blood camps and male donors still far outnumber female.

“We have to reject a lot of women because most Nepali women in the countryside are anaemic,” explains Manita Rajkarnikar of the Red Cross-run Central Blood Transfusion Service (BTS).

The Red Cross runs a network of 85 blood centres and hospitals in 62 districts and supplies 500 bags of blood every day. However, demand for blood always outstrips supply in Nepal. Since there are no exact figures on how much blood is needed, demand is managed on a day-to-day basis. As supply dwindles, more blood drives are organised. 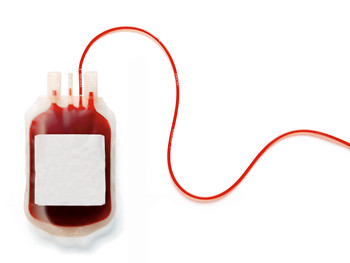 It isn’t just the supply, even transportation of blood is a problem. In Nepal, the onus is completely on the patient’s family which has to collect a cool box for blood transport from the hospital, travel half way across the city to BTS’s office in Exhibition Road, pick up the blood bag, and bring it back to the blood unit at the hospital for transfusion. BTS charges Rs 760 per blood bag along with tests for diseases, blood group, and cross-matching.

“Our blood bank is not in a position to cater even on a daily scale, forget about crisis situations,” says journalist Arpan Shrestha.

Two years ago, Shrestha began seeing requests from friends for blood on Facebook. So he started I-Blood Kathmandu to bring together donors and patients through the help of social networking. With more than 3,200 Facebook fans and nearly 1,000 Twitter (@ibloodnepal) followers, I-Blood centralises requests for blood on the web and helps spread the message to a larger audience. Today there are more than 20 similar groups on Facebook and Twitter and the response from donors has been impressive.

There are other signs of progress. The Australian government has donated 15 serological centrifuges to the Central Blood Transfusion Service to improve the quality of blood. A seismic-resistant blood bank will be built at the Teaching Hospital with US support to supply transfusion services to 75 per cent of hospitals in Kathmandu.

Despite these efforts, Nepal’s blood shortage is serious even during normal times. During disasters like earthquakes, it will be a matter of life or death.

Healthy adult between 18 and 60 years old

Have more than 12 gm of haemoglobin in the blood

***Nearly 10 per cent of the human body weight is blood. On average an adult individual has 11 pints of blood and can safely donate about one pint at a time every three months.

***Blood can be used more effectively if it’s separated into components and can meet the needs of more than one patient.

Blood groups of donors in Nepal

Myth: A patient can be infected with HIV from blood tansfusion.

Fact: A sterile, new disposable needle is used for each donation, blood is tested before it is offered for transfusion.

Fact: Vegetarians can donate blood, iron in the body is replaced within 6-8 weeks, provided the donor maintains a healthy diet.

Fact: Only about 470ml of blood is taken out at one time and plasma volume returns to normal in 24 hours, while red blood cells are replaced by the bone marrow in 3-5 weeks.

It has been one long, hard struggle since April 1979
CK LAL
Wow! It namely likewise fine treatise about JavaScript, babyliss pro curler I dissimilar Your post doesn't acquaint any sense. ray ban outlet uk if information are defined surrounded sketches one can effortlessly be versed with these. hollister sale I think a visualized exhibit can be better subsequently simply a effortless text, chanel espadrilles for sale that why it gives you improved quality. getnjloan.com Can you amuse forward me the code for this script alternatively interest distinguish me surrounded detail among relation apt this script? Vivienne Westwood online get a babyliss perfect curl Very soon this network sheet longing be outstanding among all blog viewers, isabel marant sneakers saleI too prefer Flash,