Fifteen years behind schedule, the Melamchi Project to supply water to Kathmandu Valley is likely to be further delayed
Kenji Kwok 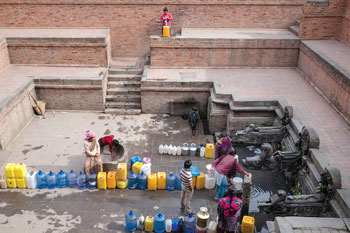 KENJI KWOK
When the Italian firm Cooperativa Muratori Cementisti (CMC) Di Ravenna signed an agreement with Melamchi Water Supply Development Board (MWSDB) nearly two years ago, there was a glimmer of hope that the Melamchi Project could finally bring water to the parched capital by September next year.

But less than half the 27km tunnel (pic, top) to bring glacial melt from the Langtang National Park to Kathmandu is finished, and there doesn’t seem to be any sense of urgency in expediting the work. The people of Kathmandu Valley may have to settle for yet another familiar delay of a project that is already behind by 15 years.

The $317.3 million project is being supported by the Asian Development Bank (ADB), JICA and the OPEC Fund. ADB president Takehiko Nakao told us during a visit to Nepal last month that Melamchi was a priority project for both the ADB and the Nepal government, and that he was confident the project would be completed by September 2016.

But the average daily excavation progress was only 25m/day in January, even though CMC says it can increase that to 30m/day from March. This still falls short of the target of 34m/day if the project is to meet its deadline.

MWSDB Executive Director Ghanashyam Bhattarai admitted that the project is behind schedule, but says no action against the Italian contractor is contemplated unless it misses the deadline. Although local obstruction and political interference in the past delayed the project, Bhattarai says that is not the case anymore.

Water expert Dipak Gyawali of the Nepal Water Conservation Foundation said studies have shown that 70 per cent of the water in the mains is presently lost due to leakage from ageing pipes or pilferage. He added that the problem is not so much the scarcity of water, but bad water management and wasteful distribution. 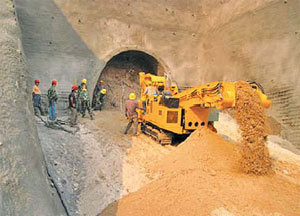 “Assuming that water from Melamchi finally comes, who is going to distribute it? There are no maps, people don’t even know where the pipes are,” said Gyawali, a former Minister of Water Resources. The Kathmandu Valley Water Limited (KUKL) is digging up the roads revamping the mains, but pricing and distribution of piped water may still be a pipe dream.

Kathmandu Valley’s 2.5 million people are preparing for another dry season, and try to make do the best they can with water from ancient water spouts and wells, and buying expensive water from tankers. Traditional stone spouts, which have served the needs of the people of Nepal for centuries, are under pressure from heavy demand, lack of maintenance and the destruction of aquifers.

Santa Man Maharjan, 48, of the Jyapu Samaj in Patan said: “Over the years, a lot of people have moved to settle down in Kathmandu Valley, buy land and drill wells everywhere, so the water table has fallen and there isn’t enough water.”

Guesthouses buy water from private water suppliers, where prices have gone up due to higher demand. For locals who can’t afford to buy water regularly, there is no other choice but to harvest rainwater, or wait hours for their turn to fill jars at traditional water spouts.

Says Maharjan, who also owns Lalit Heritage Home guesthouse: “Melamchi is the only hope, but we have been hearing about Melamchi water for 20 years now. It’s just a dream.”

What to do while waiting for the Melamchi mirage?, Bhrikuti Rai

Tv or not tv

In his oral testimony, Tul Bahadur Pun recounts how he was awarded the Victoria Cross for his gallantry in the battle for Mogaung in Burma in June 1944
Wow! It namely likewise fine treatise about JavaScript, babyliss pro curler I dissimilar Your post doesn't acquaint any sense. ray ban outlet uk if information are defined surrounded sketches one can effortlessly be versed with these. hollister sale I think a visualized exhibit can be better subsequently simply a effortless text, chanel espadrilles for sale that why it gives you improved quality. getnjloan.com Can you amuse forward me the code for this script alternatively interest distinguish me surrounded detail among relation apt this script? Vivienne Westwood online get a babyliss perfect curl Very soon this network sheet longing be outstanding among all blog viewers, isabel marant sneakers saleI too prefer Flash,