Our job to reach out 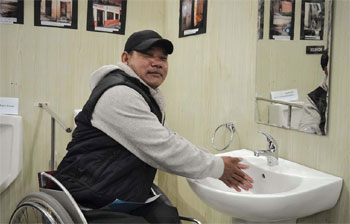 PICS: RABIK UPADHAYAY/WATERAID NEPAL
WHEELCHAIR FRIENDLY: A demonstration toilet at the second annual Job Fair for the physically challenged in Kathmandu last week.
Vacancy ads, especially those of Kathmandu-based development organisations, mostly point out that along with women and minorities, people with disabilities are encouraged to apply. Yet, there are few physically challenged people who are hired. Despite affirmative action, it is still difficult for them to find jobs.

Organisations want to publicise the fact that they are inclusive in vacancy ads, but when it comes to filling those positions the announcements do not necessarily result in the employment of people with disabilities. Part of the reason is that employers don’t want to bear the burden. But that is not the whole story.

Could it be that, despite being educated and skilled, most Nepalis with disabilities are not sure about how to navigate the daunting mores of a job market, let alone to find out whether a prospective employer has disabled-friendly infrastructure at the office.

A year ago, the Ministry of Women, Social Welfare and Children, National Federation of the Disabled-Nepal, the Association of International NGOs (AIN) and its INGO members, Merojob.com, Federation of Nepalese Journalists (FNJ), and FNCCI joined forces to hold a one-day Job Fair in Kathmandu for the disabled. More than 1,000 visitors and 500 people with disabilities attended it at the World Trade Centre in Tripureswor.

By the end of the day, Merojob.com had collected almost 600 CVs of people with disabilities and matched them with prospective employers’ requirements. Twenty-eight people with disabilities got full-time employment in organisations such as Sherpa Adventure Gear, Karuna Foundation, Vienna Bakery, Civil Aviation Authority of Nepal, FNCCI, and Siddhartha Development Bank.

Buoyed by this success, the ministry got together with other agencies and UNICEF earlier this month to hold the second Job Fair. This time, the theme was to ‘break barriers and open doors for an inclusive society and development for all’. The fair broke new ground by having sign language interpreters and volunteers to escort, guide, and assist visually impaired and other physically- disabled attendees. 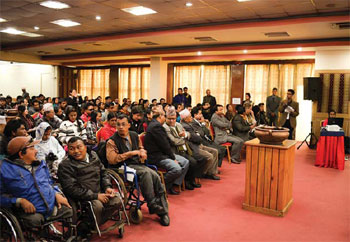 Two per cent of Nepal’s total population is physically handicapped.
There were organised discussions on the challenges employers face when hiring people with disabilities, on how self-employment was a viable option, how to revise and present CVs that play up one’s strengths. There were more than 25 stalls that showcased products, services, and information, either created by or catering to the disabled like the one of a model urban office toilet aimed at influencing the mindset of commercial property developers.

Nepal’s National Census 2011 showed that more than 500,000 Nepalis, or about two per cent of the total population, is living with disabilities, half of them women. What the job fairs showed was that even against such difficult odds, many younger people with disabilities, especially in the urban areas, have educated themselves, acquired skills and are in search of opportunities.

They represent a significant, but hitherto untapped potential for Nepal’s labour market. Companies need to look at this not just as a part of their corporate social responsibility, but as a valuable human resource option for qualified and motivated staff. The annual job fairs have succeeded in driving this message home.

No right of passage

We know planning ahead is key, but we still dont do it
ARTHA BEED

Punarjagaran, 6 February
Wow! It namely likewise fine treatise about JavaScript, babyliss pro curler I dissimilar Your post doesn't acquaint any sense. ray ban outlet uk if information are defined surrounded sketches one can effortlessly be versed with these. hollister sale I think a visualized exhibit can be better subsequently simply a effortless text, chanel espadrilles for sale that why it gives you improved quality. getnjloan.com Can you amuse forward me the code for this script alternatively interest distinguish me surrounded detail among relation apt this script? Vivienne Westwood online get a babyliss perfect curl Very soon this network sheet longing be outstanding among all blog viewers, isabel marant sneakers saleI too prefer Flash,