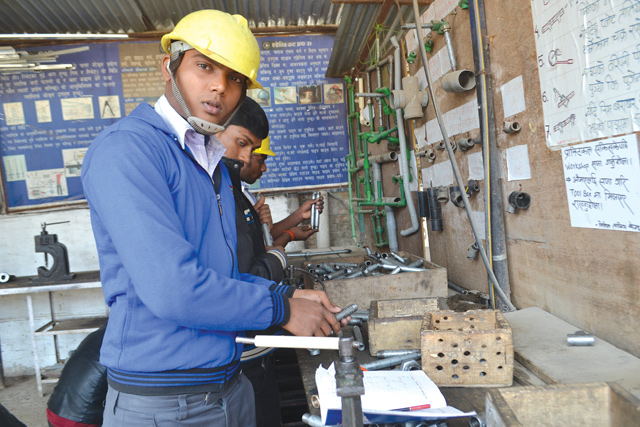 Pics: Om Astha Rai
SKILL SELLS: Prakash Tharu, 22, recently completed his plumbing course and is set to fly to Qatar next week. He can now earn $108 more than what he would have as an unskilled construction worker.

A few days after celebrating Maghi festival last month, Prakash Tharu, 22, packed his bag and boarded a bus to Kathmandu. Like most young men from his village of Nawalparasi district in the plains, he was off to the Gulf as an unskilled construction worker.

But a relative persuaded him to join a plumbing course before leaving. After failing his high school exam three years ago, he had been working as a plumber.

“At first, I didn’t like the idea because it would cost me more money and time,” he said. “But when I learnt I could earn more if I went abroad as a skilled worker, I changed my mind because I could pay my loan off faster.”

His course is now over, and he is set to fly to Qatar next week to work as a plumber. He says he can now earn $108 more than what he would have earned as a construction worker.

Like Tharu, an increasing number of Nepalis are now learning vocational skills before migrating to the Gulf and Malaysia. 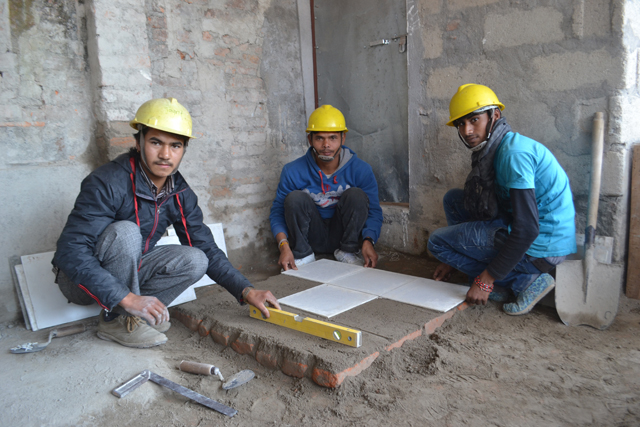 When he worked as a mechanical engineer in Qatar in 2004, Pradhan witnessed the suffering and exploitation of Nepali migrant workers. “They were forced to do dirty, dangerous and demeaning work – not because they were Nepalis, but because they did not have the skills to take up better jobs,” he recalls.

After returning from Qatar, Pradhan set up his vocational training school in 2007, where more than 60 young men are learning plumbing, carpentry, masonry and electrician skills. “For more than half a year, I did not find a single student,” he says. “No one wanted to spend money and time in learning a skill. They just wanted to go abroad.”

Pradhan then remodelled his classes to attract students with cheaper and shorter courses. "Still a large number of Nepalis leave to work without any skills,” he says. 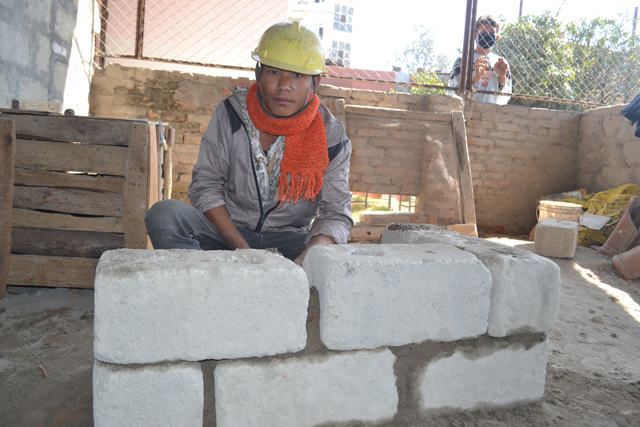 A study by the Council for Technical Education and Vocational Training (CTEVT) in 2014 showed that more than half the Nepali migrants who went overseas were unskilled labourers. Only 16 per cent of them were skilled, and 32 per cent were semi-skilled.

In 2004, Ganesh Gurung, an expert on labour migration, conducted a study which showed that 69 per cent of Nepali migrant workers were unskilled, 27 per cent were semi-skilled, and only four per cent were skilled.

“The number of skilled Nepalis going abroad is increasing, but at a very slow pace,” explains Manoj Sharma, Deputy Director of the Research Division at the CTEVT. “The jobs requiring skills are not exclusively reserved for Filipinos or Sri Lankans, but Nepali migrant workers just lack the skills for better-paid jobs.”

In 2014, Nepal received more than Rs 560 billion (29 per cent of the GDP) from remittances. Sharma says Nepal could double its remittance earnings by sending skilled workers abroad. “A skilled worker earns at least 40 per cent more than an unskilled labourer,” he says.

Experts say Nepal cannot stop the outmigration of youth for at least another 20 years, and that the best option would be to train workers before sending them abroad.

The government has taken some donor-funded initiatives to reverse the pattern of migration. This year, some 10,000 youth are learning vocational skills before migrating under a Swiss-funded project, but this represents a small portion of the 600,000 young men who migrated for work last year. 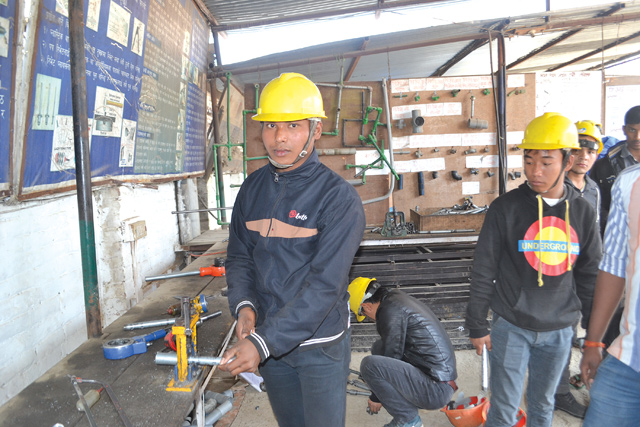 Twenty-year-old Bishnu Kumar Thakur from Mahottari is one of the 10,000 youths learning vocational skills before migrating under the Swiss-funded Safe Migration (SaMi) project.

Bishnu Kumar Thakur, a 20-year-old from Mahottari, is one of them. His father was a self-trained carpenter but went to the Gulf as an unskilled worker. “From my father’s experience, I know what happens when you migrate without skills,” he says.

Thakur is now taking a 45-day plumbing course in Kathmandu under the Swiss-funded Safe Migration (SaMi) project. “Even if we have skills, we cannot get jobs here,” he says, “so I must work abroad for a few years at least.”

Bharat Pokharel, Country Director of the HELVETAS Swiss Intercooperation, says: “We neither encourage nor discourage Nepali youth to migrate. But when they decide to migrate, it is important to ensure that they have skills and will get better opportunities abroad.”

He says Nepali migrant workers are known for honesty and hard work but lack job skills. “We are trying to fill this gap,” he says. “We also teach them safety measures to follow abroad and basic English and Urdu to communicate with employers.”

Former Labour Minister Tek Bahadur Gurung says the reason for sending skilled workers is not just for getting more remittance but also to encourage entrepreneurship among Nepali youth.

“Skilled workers not only earn more but also learn entrepreneurial skills and start enterprises when they return,” he says. “But unskilled workers tend to migrate over and again because they never earn enough and lack skills to start their own ventures.”

Senility and the saviour syndrome

What is KP Bhattarai afraid of?
CK LAL

"Give us food, we’ll give you votes"

Before it’s too late

Chandra Kishore Jha in Naya Patrika, 7 October
Wow! It namely likewise fine treatise about JavaScript, babyliss pro curler I dissimilar Your post doesn't acquaint any sense. ray ban outlet uk if information are defined surrounded sketches one can effortlessly be versed with these. hollister sale I think a visualized exhibit can be better subsequently simply a effortless text, chanel espadrilles for sale that why it gives you improved quality. getnjloan.com Can you amuse forward me the code for this script alternatively interest distinguish me surrounded detail among relation apt this script? Vivienne Westwood online get a babyliss perfect curl Very soon this network sheet longing be outstanding among all blog viewers, isabel marant sneakers saleI too prefer Flash,