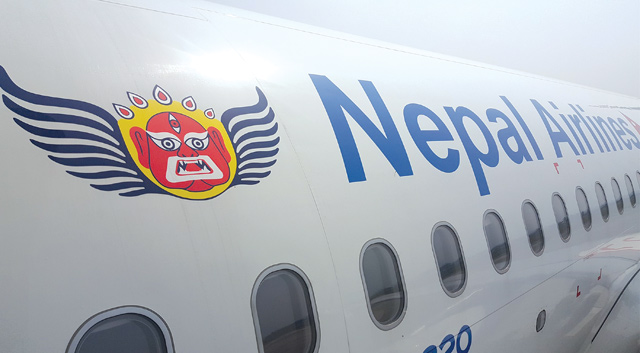 There is a mood of cautious optimism at Nepal Airlines after Finance Minister Bishnu Poudel announced in his budget speech on 28 May that the government is setting aside the money required for the purchase of two new wide-body aircraft.

If the state-owned airline goes ahead with the planned acquisition, possibly of Airbus 330-200 jets, the $460 million deal would be the largest-ever in Nepal’s aviation history. The long-range version of the plane is capable of flying to Europe and Japan non-stop from Kathmandu with up to 250 passengers.

“We need the larger planes to remain competitive on our Asian routes, to restart direct flights to Europe, and to meet the growing volume of Nepalis and tourists flying to and from Kathmandu,” Nepal Airlines CEO Sugat Kansakar told us this week.

But the airlines has seen a turnaround since adding two Airbus 320s to its fleet. Punctuality and reliability of flights improved and passenger volume increased by 30 per cent this year.  However, Nepal’s own national airline is still number 5 after Qatar Airways, Jet Airways, Air Arabia and Fly Dubai in terms of passengers flown.

Says Capt Srawan Rijal who flies the airline’s new Airbus, “After one year of successful operation of 320s we now have the experience to upgrade to widebodies.”

The biggest challenge now is a severe shortage of pilots. Twice in the past month, while both Airbus 320s sat on the tarmac at Kathmandu Airport, fully-booked flights to Hong Kong and Bangkok were scrubbed because the crew had reached maximum flying hours per week.

Half of the Boeing 757 pilots who had gone to Toulouse for conversion training to 320s failed simulator tests, so the airline has only 9 captains and 13 co-pilots for 320s even though it needs at least 30 pilots. Airbus is providing two instructors for three months to clear remaining pilots, but the shortage will remain if there is crew layover on Doha and Kuala Lumpur routes.

The other quick way to induct new crew would be to entice with salaries and perks Nepali pilots flying 320s abroad. Senior captains in Nepal Airlines are paid only $1,500 per month plus allowances, whereas pilots with similar hours can earn more than $16,000 a month in an international airline.

“The only reason I stay with Nepal Airlines is because I see great growth potential, and because there is nothing like flying your country’s flag,” says Capt Vijay Lama who heads international operations at Nepal Airlines.

Nepal Airlines can have a captive market of 4 million Nepalis now working in Malaysia, the Gulf, Korea and Japan if it can increase capacity. Inducting 330s would also make the state airline able to compete with carriers that use widebodies on lucrative high-volume routes like Bangkok, Hong Kong and Doha, and restart services to Narita and Gatwick.

The airline management wants to sell off one of its two ageing 757s even though it has very low resale value. The planes were bought in 1987 and consume 30 per cent more fuel per passenger mile than the 320s, and at present both Boeings are grounded for maintenance.

“Having Boeings and Airbuses in the same company almost makes it look like we are running two airlines, the 757s are just too old and expensive to fly,” says Kansakar.

One proposal is to use the remaining 757, which is a Combi model with a forward hatch, for air cargo service since operating costs would be much lower than for passenger flights. Nepal Airlines has only six per cent market share of the Rs100 billion air cargo market, and keeping one 757 would also mean that senior Boeing captains would not lose their jobs.