Streets on the crossroads 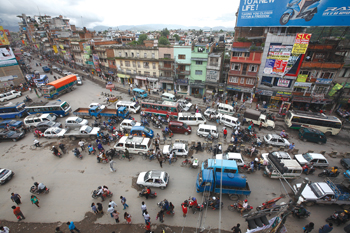 BIKRAM RAI
When he is sent on duty to the newly expanded Kamal Pokhari-Shital Niwas road, traffic policeman Shiva Kumar Thakur feels lucky. The days of traffic jams on this particular stretch are over, he just stands there and waves cars through.

But it is during rush hour that Thakur gets stressed. A never-ending stream of motorcycles clog up every inch of the road, buses stop anywhere but at designated bays, traffic starts backing up and he has to try to clear way for VIP convoys as escort vehicles with sirens arrive.

The clean and smooth road around Baluwatar during off-peak hours presents the ideal of what Kathmandu’s road-widening was trying to achieve, but the rush hour congestion there is proof of why just broadening the road is not the solution.

“Most of the time it’s very quiet on these newly expanded roads,” says Thakur, “but everyone wants to go first during rush hour and it gets as bad as Thapathali and Chabahil.”

The wider roads just mean more private vehicles are using it. Nearly 750,000 vehicles are registered in Bagmati Zone, with 570,000 of them motorcycles, 14,000 are public vehicles that circulate inside the valley, 8,000 are buses to and from outside the capital, and the rest are private vehicles. Kathmandu’s total road length has crept up to almost 1,500km but 10,000 new motorcycles are added each year and registration will be open for more following road expansion.

With statistics like that, transportation experts say the road widening may actually worsen traffic. A city of three million people doesn’t have a proper mass urban transit system and unless new feeder roads along the Bagmati and Bishnumati corridors are added to ease congestion in the city core, Kathmandu’s traffic is going to be out of control.

The city is lavishing its budget on showcase widening, including an eight-lane boulevard from Maitighar to Tinkune and on to the airport.

Shyam Kharel, head of Kathmandu Valley Road Expansion Project, says it will have an exclusive fast lane in the middle, double service tracks running on both sides, and also bus bays. But that is just a four km stretch.

“There will be plenty of traffic going to and coming from Tatopani and Bardibas-Sindhuli-Ramechhap areas and they will all use the same road. So we need to expand our capacity,” says Kharel.

However, other arteries like the Lajimpat road and new access from Kamal Pokhari to Battis Putali. Mitra Park to Naxal or even the Kamal Pokhari-Shital Niwas sections have little space for bays where buses can pull over. Congestion is exacerbated by three-wheelers and micro-buses which add to congestion and are inadequate to meet the needs of commuters.

The introduction of high-capacity Sajha buses has been welcomed by commuters, but the city needs many more of the green buses. Micro buses, safa tempos, and rickshaws may provide livelihoods, but they take too much space for the few passengers they carry. When the government has tried to retire some of these vehicles, transport companies enjoying political protection have resisted.

Experts say the medium-term solution to Kathmandu’s traffic mess is a reliable mass urban transit system, not road widening. And in the long-term, the capital can have an underground tube network which will be easy to build because of the soft alluvial soil.

Few of the Japanese-installed traffic lights are working and there just aren’t enough policemen to direct traffic at intersections. One officer is responsible for 1.7km of road, 417 vehicles, and 3,883 people. Major crossroads like Thapathali, Maharajganj, Chabahil, and Keshar Mahal are choked with traffic mainly because of the lack of traffic discipline.

Bagmati Zone vehicles, most of them in Kathmandu Valley

Durga Dhakal overcomes the rugged landscape of Mustang and devotes his life to a job he loves
JANA ASENBRENNEROVA in MARPHA
Wow! It namely likewise fine treatise about JavaScript, babyliss pro curler I dissimilar Your post doesn't acquaint any sense. ray ban outlet uk if information are defined surrounded sketches one can effortlessly be versed with these. hollister sale I think a visualized exhibit can be better subsequently simply a effortless text, chanel espadrilles for sale that why it gives you improved quality. getnjloan.com Can you amuse forward me the code for this script alternatively interest distinguish me surrounded detail among relation apt this script? Vivienne Westwood online get a babyliss perfect curl Very soon this network sheet longing be outstanding among all blog viewers, isabel marant sneakers saleI too prefer Flash,