Israeli trekkers after being rescued from the Mustang-side of Thorung La.
Sunir Pandey

The first trekkers from Israel, Hong Kong, and Germany rescued from the Mustang side of Thorung La were brought to Kathmandu on Wednesday and are undergoing treatment for severe sunburn and frostbite at the Army Hospital in Kathmandu. After a night of heavy snowfall and high winds, some of them had decided to walk down because the sun was out. 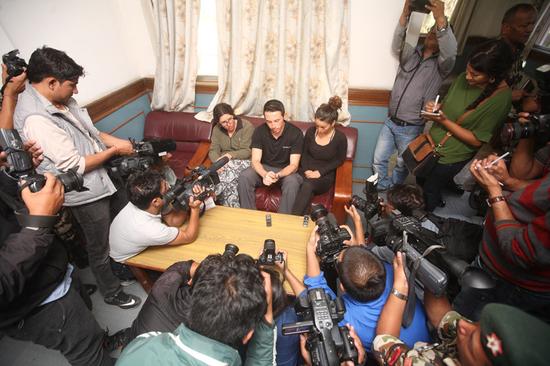 BIKRAM RAI
HAPPY TO BE HERE: Israeli trekkers (l-r) Linor Kajan, Yakov Megreli, and Maya Ora talk to journalists at the Army Hospital on Thursday after being rescued from the Mustang-side of Thorung La on Wednesday. They credited their guide and the army for saving them.

“Our plan was to stay in the tea shop to ride out the storm, but when we saw that it was all clear and bright the next morning we decided to walk down,” said Yakov Megreli at a press meet. But the snow was chest-deep and they got lost on their way down. After eight hours, they could finally make a call on their mobile.

“We called the travel agency and embassy, and asked them to send helicopters. Until then, we were guided through the snow by our porter. They picked us up on the mountain and flew first to Muktinath before bringing us to Kathmandu,” says Maya Ora.

The Israelis credited their guides for probably saving their lives by advising them not to move out of the tea shop during the storm. Two other Israelis were not so lucky. They were buried in an avalanche below Thorung La along with two Poles and nine Nepalis. At Phu, four Canadians, three Indians and three Nepalis were killed.

At Dhaulagiri Base Camp, two Slovak climbers and their three Sherpa guides from a 11-member expedition have still not made contact after being caught in an avalanche.

Thirty two people are so far confirmed dead and hundreds are stranded and unaccounted for after Tuesday’s storm in the Annapurna, Dhaulagiri and Manaslu areas. Seventy trekkers were rescued from Manang and 47 from Mustang as this paper went to press on Thursday evening.

Manang, through which hundreds of tourists attempt to cross the Thorung La (5416m) into Mustang every day, was worst hit. Eighty-five of the 345 trekkers who registered at the ACAP checkpoint on Monday en route to Yak Kharka and Thorung Phedi haven’t made it over to the other side.

Trekkers contacted Germany through a satellite phone and said there was a “large group” of them on the pass waiting for rescue. The message was relayed to the Nepal Army which had three rescue helicopters in the area on Thursday.

The Army had brought out four bodies from the western side of the pass on Wednesday and Thursday. District administration office in Manang said ten trekkers were also buried in snow in the Phu Valley near the China border.

The Jazzers in 'Mandu

The jazzy crowd of this year's Surya Nepal Jazzmandu has arrived in town.

If you are parking at your own risk, what are you paying for?
PAAVAN MATHEMA
Wow! It namely likewise fine treatise about JavaScript, babyliss pro curler I dissimilar Your post doesn't acquaint any sense. ray ban outlet uk if information are defined surrounded sketches one can effortlessly be versed with these. hollister sale I think a visualized exhibit can be better subsequently simply a effortless text, chanel espadrilles for sale that why it gives you improved quality. getnjloan.com Can you amuse forward me the code for this script alternatively interest distinguish me surrounded detail among relation apt this script? Vivienne Westwood online get a babyliss perfect curl Very soon this network sheet longing be outstanding among all blog viewers, isabel marant sneakers saleI too prefer Flash,