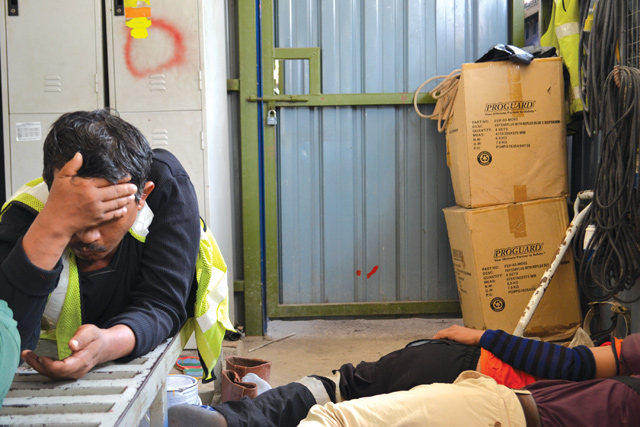 Like thousands of Nepali migrant workers, Ganesh Singh Dhami wanted to provide for his family when he left to work as a carpenter in Saudi Arabia last year.

However, within three months, he was back in Nepal. His company sent him to see a psychiatrist after he developed a memory disorder, and he was given a ticket home. Eight months later, Dhami has only a faint recollection of what happened to him.

“I just couldn’t focus on my work. My mind wouldn’t function and it was as if I was in a daze,” recalls the 30-year-old father of three, “I missed my family a lot, and although I recovered a bit after taking medicines they sent me home.”

Ganesh is now back home in Darchula, and on medication. But unlike other migrant workers who return with physical disabilities, he is not eligible for government compensation.

“My medical examination showed I was fit before I left, and I developed mental illness only once I got to Saudi Arabia. I have spent a lot on medicines since I returned, and I am waiting for the government to help,” Dhami told us over the phone.

He had spent Rs 80,000 to pay his recruiter for the job, but came back empty- handed. He filed an application at the Foreign Employment Promotion Board (FEPB) under the Ministry of Labour and Employment, and became the first returnee worker to seek compensation for mental illness.

Nepal’s Foreign Employment Act and other laws do not list mental illness as a disease. The FEPB only accepts compensation applications from returnees who are physically ill or injured: they can get up to Rs 300,000 for 79 categories of physical afflictions. Family members of those who die abroad can receive Rs 500,000.

“Mental health was never considered when compensation provisions were made, but we can amend the directive in the future to also include returnee migrants with mental illness,” said Nirmala Thapa of the FEPB.

Health experts cite culture shock, homesickness, physically-taxing workloads and an unfriendly environment as some of the reasons for mental stress among migrant workers.

“The lack of awareness about mental illness is one of the biggest challenges,” explains Dhana Ratna Shakya, a psychiatrist at the BP Koirala Institute of Health and Sciences in Dharan, “and treatment is difficult in destination countries because of language problems.”

Som Prasad Lamichhane of the Pravasi Nepali Co-ordination Committee says his organisation has dealt with 36 migrants with mental health issues in the past three years, adding: “But this is just the tip of the iceberg, as many others have never been recorded anywhere.”

King Gyanendra wants to be a pro-active monarch, and is trying to feel the nations pulse.
BINED BHATTARAI

A day in the life of a Living Goddess

On Saturday, when a new Kumari receives a new King, the Hanuman Dhoka Palace will see the enactment of a ritual that is as old as Nepal itself.
SALIL SHAH

There may be some bullying through environmental "tools of diplomacy", but Nepal has a shot at avoiding developments "dirty" phase.
DR JOVAN ILIC

Deshanter Saptahik, 26 August
Wow! It namely likewise fine treatise about JavaScript, babyliss pro curler I dissimilar Your post doesn't acquaint any sense. ray ban outlet uk if information are defined surrounded sketches one can effortlessly be versed with these. hollister sale I think a visualized exhibit can be better subsequently simply a effortless text, chanel espadrilles for sale that why it gives you improved quality. getnjloan.com Can you amuse forward me the code for this script alternatively interest distinguish me surrounded detail among relation apt this script? Vivienne Westwood online get a babyliss perfect curl Very soon this network sheet longing be outstanding among all blog viewers, isabel marant sneakers saleI too prefer Flash,