Not enough for everyone 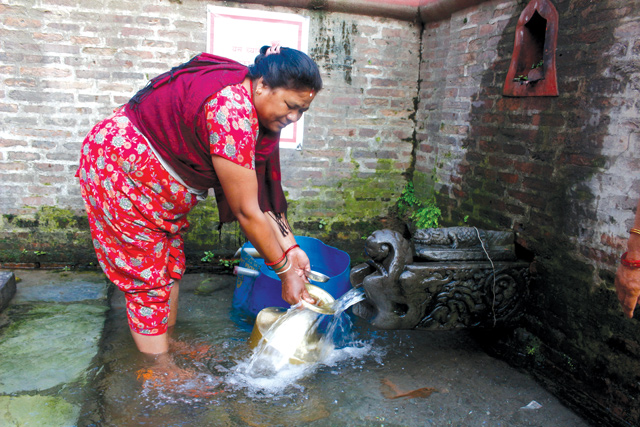 Kathmandu roads are being dug up to lay new mains to distribute water from Melamchi when it arrives, but access to it will reflect existing socio-economic inequities. The centre, as usual, will have priority over the periphery.

The first phase of the Melamchi Project will transfer 170 million litres per day (mld) through a 27-km tunnel to Sundarijal, then via a new distribution network and the existing pipeline to various parts of the Kathmandu Valley. But, daily demand in the valley is 360 mld, so there will not be enough water for everyone, and even those connected will only get four hours of water a day.

“If there was plenty of water for everyone, the distribution could have been uniform because the project has an improved network and delivery system,” says water expert Madhukar Upadhyaya. “But since the water will not be enough, I don’t doubt for a second that the usual water politics will come out in full force.”

Indeed, Melamchi may just repeat the findings of two recent PhD dissertations, one by Aditi Raina at the National University of Singapore, the other by Olivia C Molden of the University of Oregon: distribution will continue to favour richer households and those near main roads who already have greater access to government piped water.   "Without adequately addressing water access issues for low-income families and renters, Melamchi will likely perpetuate existing social inequities in the city,” says Molden, a Fulbright scholar.

The distribution plan for the first phase of Melamchi water (see map) shows that areas inside the Ring Road, higher-income localities and those closer to the mains will get water first. The second phase will bring 340mld more water, but that may take another decade: by then Kathmandu Valley’s population will have exceeded 4 million.

At the Kathmandu Valley Water Supply Management Board, engineers say they are aware of the need for more equitable distribution, and plan to feed water to neglected neighbourhoods through reservoirs strategically located outside the Ring Road.   “Uneven distribution was due to faulty engineering and haphazard planning in the past," (which meant, for example, that people who could afford it started using pumps to access more water), says Sanjeev Bikram Rana, an engineer at the Board. "The Melamchi pipeline has been designed to provide a minimum of 10m residual height, which means people won’t need water pumps. We will also have a scheme for poor households who use limited water.”

The water supply utility, KUKL, will introduce a computerised system to monitor and control distribution. This will end the existing practice of manually opening and closing water valves, which favoured well-off neighbourhoods that could afford the service.

670km of pipes have been laid so far, making the city look like a disaster zone this monsoon, but with 80% of the network completed, 40,000 houses are connected. Construction of five of the six new reservoirs, with a total capacity of 65,000 cubic metres, has been completed.

PID and the Department of Roads are temporarily repairing roads dug up during pipe laying. Once the system has been successfully tested, roads under the jurisdiction of the municipality will be permanently fixed.

"If water arrives in Sundarijal, we are ready to supply in October," says Tiresh Khatri, Chief of the Project Implementation Directorate (PID). 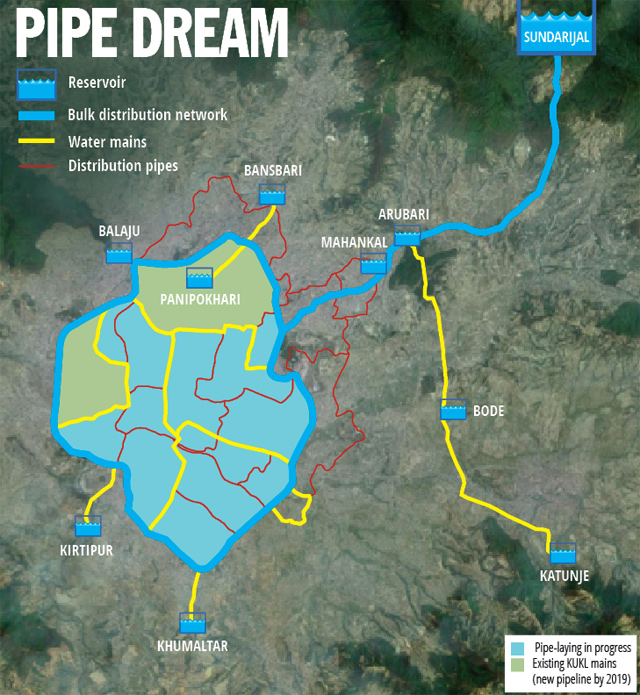 Yet, the project is unlikely to meet its October deadline because the final 2km of the tunnel has been delayed due to soft rock. Once the water finally arrives in Sundarijal, it will take six more months to test the flow and finish the treatment system. KUKL says it may be May 2018 by the time the first Kathmandu households get Melamchi water, which is snowmelt from the Langtang National Park.

Kathmandu Metropolitan City architect Chandrashova Shakya says that Melamchi must be seen primarily as a solution for drinking water, and communities should continue with recharging Kathmandu’s ground water, harvesting rainwater and reviving traditional channels and water spouts for more sustainable use.

Adds Molden: “Alongside the modern pipe network, revitalising old water systems can provide additional public water sources that people can access for a variety of reasons."

The Melamchi water is estimated to cost Rs 400 per month for an average household. Experts hope putting a price-tag on the water will force people to be more prudent with water use so that treated drinking water is not wasted to flush toilets.

Madhukar Upadhyay concludes: “This is a hugely expensive project, and the water will have a cost, so we have to manage it locally, regard it as a precious commodity and not waste or misuse the water.” 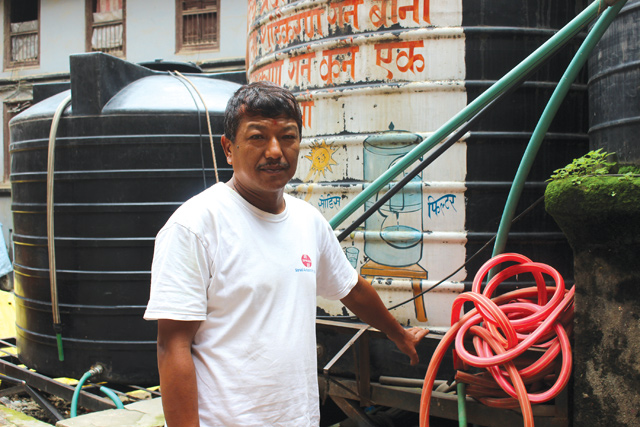 Many inner city residents of Patan have found that they cannot register to have a connection to new water mains unless they have cleared past water bills and fines. But some households are being billed for water they never got in past decades. Bhaikaji Maharjan and his neighbours in Lukhusi haven’t paid their water bills for years, and he doesn’t want to pay for something he never got. But Maharjan says some may be compelled to clear dues because of the promise of Melamchi water.

D P Chapagain of KUKL says customers should have notified they if they wanted to disconnect their supply: “They should have known they had to keep paying the minimum rate. All the dues must be cleared for Melamchi water.” 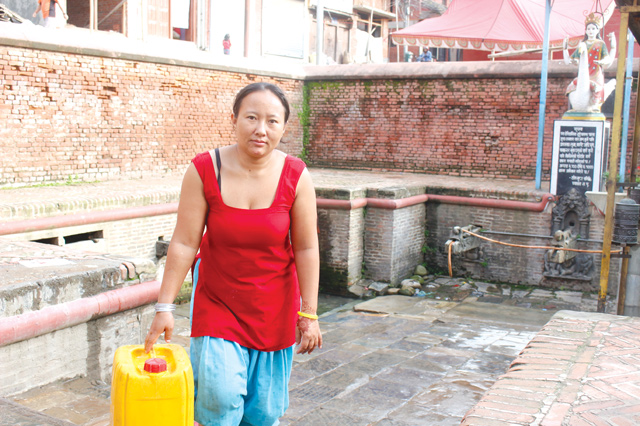 Sunita Tamang, 28, (pictured above) rents a room in Chyasal with her young family and spends Rs 3,000 per month for water. She will have to continue to buy it because the new pipes have not reached the area. It is clear that even with Melamchi, many Kathmandu residents will continue to rely on other sources.

While the long wait for Melamchi water will soon be over for some people, neighbourhoods in Patan have developed their own ingenious ways to deal with the shortage.

Chanmaya Awale, 42, of Chyasal gets only a trickle of water from the KUKL utility  every 12 days, so she still relies on the 400-year-old neighbourhood waterspout, and well water. She is looking forward to having plentiful water by next year, from the plastic hose that has been connected to the Melamchi pipe under the road outside her house.

Suman Bajracharya of Nyakhachok, on the other hand, doesn’t trust the utility, is opting out of Melamchi and plans to stick with his community’s well-water distribution system by reviving ground water recharging.   “I’m not taking Melamchi, I’m not even sure if it’ll ever come,” said 48-year-old Bajracharya. “We have never relied on the government, the community has been managing its own water for decades now. We will continue with that.”

Says Rajani Maharjan of the research group Institute for Social and Environmental Transition-Nepal (ISET-N): “Neighbourhoods have been using well water, but we are extracting more than we are recharging: the water table has gone down and wells are going dry.” 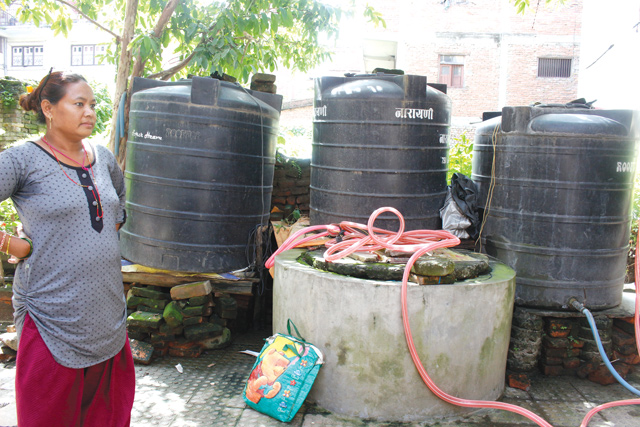 Maiya Shakhya’s (above) life revolves around water. She used to wake up to wait in line for hours every morning at the neighbourhood well in Machindra Bahal. But the community well dried up, so seven years ago she started to rise at the crack of dawn to walk 20 minutes to the sunken spout at Mangal Bazar to be first in line.

During her second pregnancy, she asked her husband to dig a well in their backyard. “We suffered a lot due to the shortage of water, so it was important to have it nearby,” recalls the 40-year-old. One of her neighbours even has a well under her bed and pumps water to sell to her community.

Shakya and families renting rooms in her house are all using water from the well in the backyard these days, and are not hooked to the city supply. At one point she had even started selling water to the neighbourhood, and remembers: “People from all over Patan used to come to me to buy water.”

But Shakya knows shortages could return any time, and is happy about Melamchi supply: “It will wash away all our problems.” 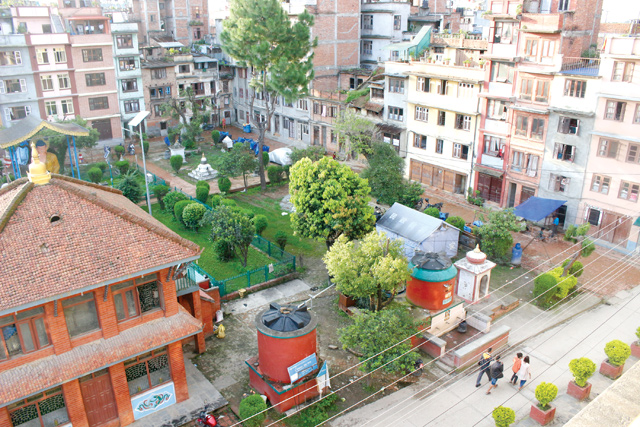 KUKL did not supply water to Nyakhachok regularly, and even when there was water it was contaminated with sewage. So, 18 years ago people there decided to dig a community well, and disconnected the city supply. Community leaders also planted trees, revived a park to recharge groundwater, and even collected harvested rainwater. Nyakhachok has set an example in Patan and still provides up to 200l of water daily to 250 households at only Rs100 per month.

“We stopped paying our KUKL water bills: we haven’t gotten any water from them in almost two decades. And now we don’t need them either,” said Suman Bajracharya. A neighbouring area has hooked up to Melamchi pipes, and some like Ashakaji Shakya would also like a tap in his house but says: “We haven’t seen any pipe-laying work around here, I don’t know why.”

This Newar town was once so rich in water everyone envied its residents. But its ancient stone pouts started drying up and wells went yellow with iron contamination. A biosand filter made the water fit for washing and cleaning purposes, but not for human consumption. The community started buying tanker water and now Bhaikaji Maharjan (above) of the local well management committee is providing tanker and filtered water to the community every day.

Local people have been using both KUKL and tanker water, but a recent test found that both sources of water were below WHO standards for purity. Maharjan has been drinking jar water since then.

The Melamchi project pipe-laying in Lukhusi is almost complete and people have high expectations. But after learning about their hefty fine for not paying past bills, however, there are misgivings. (See box, Paying bills).

Says Maharjan: “The government should offer to minimise the penalty for the poor.”

Until good people are encouraged to join politics, we will get nothing out of it but filth and frustration
RABINDRA MISHRA
Wow! It namely likewise fine treatise about JavaScript, babyliss pro curler I dissimilar Your post doesn't acquaint any sense. ray ban outlet uk if information are defined surrounded sketches one can effortlessly be versed with these. hollister sale I think a visualized exhibit can be better subsequently simply a effortless text, chanel espadrilles for sale that why it gives you improved quality. getnjloan.com Can you amuse forward me the code for this script alternatively interest distinguish me surrounded detail among relation apt this script? Vivienne Westwood online get a babyliss perfect curl Very soon this network sheet longing be outstanding among all blog viewers, isabel marant sneakers saleI too prefer Flash,