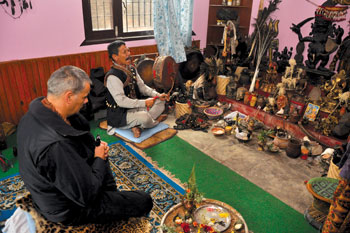 THE POWER OF FAITH: Mohan Rai teaches faith healing at the Shamanistic Studies and Research Centre in Kathmandu, showing that traditional healing is not just practiced in remote parts of Nepal, but also in the capital. The fact that many of Rai’s students are from the West also indicates a disenchantment with the limitations of modern medicine.
You step into the doctor’s office. You have an unknown illness that needs diagnosing. The doctor lights incense, beats a drum and starts trembling all over to diagnose which spirit is the cause of the ailment.

One would expect the spread of modern medical care in Nepal in the last 60 years to eliminate the people’s belief in traditional medicine. However, dhami jhankris are still in business, and not just in rural areas.

“Jhankris know the psychology of their patients, they don’t just treat them medically but also mentally,” says Dinesh Lamsal at the Civil Service Hospital in Kathmandu. “People still visit them because they are part of their community, they trust them and they are cheaper than clinics.”

Casper Miller, who published Faith Healers in the Himalaya in 1978 after research in Dolakha, describes jhankris using controlled shaking, chants and drum-beating to show patients that they are in close contact with the spiritual forces causing illness.

Doctors, too, shake a pill bottle of placebos to make patients feel better. Educated Nepalis are skeptical about healers who perform a dance around the fireplace to cure patients, and despite the cost, have more faith in modern medicine.

In 1990 researchers estimated there are 100 faith healers in Nepal for every health worker, and today the 15,000 medical doctors are primarily in the capital or abroad.

This does not meet the demand for medical treatment Health experts say the staying power of faith healers should be incorporated into the national health system. Modern medicine now teaches students that it’s all in the mind, and the patient’s faith in treatment is almost as important as the medication itself.

Robin Basnet, a surgeon at Bir Hospital, says traditional healers also benefit from the body’s ability to heal itself. “The best doctors can keep patients alive until nature heals itself,” he says, “it just takes time, and they take advantage of that.”

Many families in rural Nepal still trust local shamans, even when there is a hospital nearby. Basnet recalls that he would see four to five patients a day while working in SoluKhumbu, while the traditional healer would have 50.

Whether there really is a bad spirit causing pain or illness is not as important as the relief exorcising it can provide. Traditional healers’ dominion over both the physical body and the mind of the patient, as well as their ties to the community means they occupy the space between physical wellbeing and religious beliefs.

American researcher Steven Folmar, who is studying the relationship between mental health and traditional sacred beliefs in Lamjung district, says that with increasing societal stress, this emotional and mental space will become more important, not less.

Traditional healers should be retained as a valuable resource to address mental health because of the trust they command in the community.

Mental health carries stigma in Nepali culture, and it is still not mentioned in the Ministry of Health’s updated actions for Essential Health Care Services.

Modern medicine has often fallen short where behavioural, emotional or spiritual factors are a primary cause of an ailment. But modern medicine can dove-tail successfully with traditional healing practices, as Japanese researchers found 70 per cent of patients in a sample village in Nepal still visiting a traditional healer before going to a health post.

Basnet says he deployed local jhankris and lamas to deliver rehydration solutions to patients with diarrhoea, and found them to be highly effective. Faith healers could be at the frontlines of medical diagnosis and treatment, and potentially effective.

However, both Folmar and Miller warn of training traditional healers in modern methods. Jhankris “should not be uprooted or even interfered with in attempts to train them in ways that are unfamiliar to them,” Miller says because that could undermine their status in the community.

Dinesh Lamsal thinks jhankris should adjust to modern medicine, and not the other way around, and community leaders could convince faith healers to be part of the national health system.

Modern medicine is the one laying down the rules that keep traditional healers out, and this attitude does not engender cooperation, reinforcing the divide. Patients therefore waste time and money reverting back to community faith healers when treatment doesn’t work.

Excerpts from Faith Healers in the Himalaya 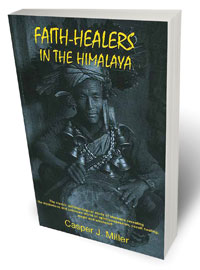 “Ordinary Nepalis look on the jhankri as ‘our doctor’ and turn to him when a family member is ill because he is easily consulted, without great expense and without disruption of one’s daily pursuits. He is familiar, indigenous to the place and culture, sharing with the local people the same ideas on the probable causes of sickness and the methods of successfully treating it, thus engendering in clients expectations for an improvement or a cure."

"The services he provides to the sick through his skill at relieving tensions and contributing to the cure of psychosomatic illness are to be encouraged as his contributing to the health of the nation, health which is not just one of the goals of development but an essential basis for improving the quality of life. In achieving the goal of bringing more modern methods of health care to the hills, already functioning indigenous methods should not be uprooted or even interfered with by attempts to train jhankris along lines unfamiliar to them.”

"As regards the doctor trained in Western methods of diagnosis and treatment, though he may at first view the jhankri as his rival, I believe that a closer look would reveal to him that, at least according to the world-view of his villager patients, he the doctor is treating symptoms while the jhankri is getting at causes. There is room, and need, for both. The doctor will certainly realise that a shared world-view between patient and physician can be a powerful factor leading to a cure.”

You got to have faith, Brittany Searle

Amidst the ruins of Bam, a Nepali doctor thinks of what would happen in Kathmandu
ARUNA UPRETY in BAM

Nepal is not divided by mountains but by its rivers. You can walk across mountains, but rivers can only be crossed on a bridge. Over the decades, bridge-building has been honed into a fine art, and large parts
of Nepal are no longer remote.

Jana Astha, 11 December
Wow! It namely likewise fine treatise about JavaScript, babyliss pro curler I dissimilar Your post doesn't acquaint any sense. ray ban outlet uk if information are defined surrounded sketches one can effortlessly be versed with these. hollister sale I think a visualized exhibit can be better subsequently simply a effortless text, chanel espadrilles for sale that why it gives you improved quality. getnjloan.com Can you amuse forward me the code for this script alternatively interest distinguish me surrounded detail among relation apt this script? Vivienne Westwood online get a babyliss perfect curl Very soon this network sheet longing be outstanding among all blog viewers, isabel marant sneakers saleI too prefer Flash,