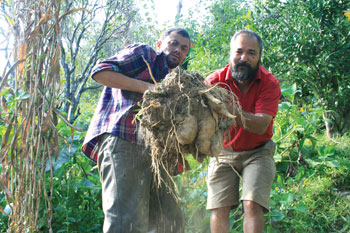 PICS: MEGHNA BALI
SWEET ROOT: Organic farmer Sudarshan Karki (right) harvests this year’s yacón yield at his farm in Kavre. The fruit, which tastes like apple, originates from Peru.
In wake of the Supreme Court’s decision to temporarily ban genetically modified seeds from entering Nepal, fresh debates have been sparked outlining why a more organic approach to farming and consuming food is less detrimental to our environment and health.

Over the past few years, the global appeal of going ‘green’ by opting for a more sustainable approach to food has hit everyone’s radars and has locals and tourists alike seeking out places that serve organic food in Kathmandu. While joints like the Green Organic Café in Thamel are long standing establishments in the organic food scene, new kids (literally) on the block, Prithvi Bar and Café and Bú Kebá in Sanepa are quaint attempts at promoting Nepal’s organic produce market. The new ventures should of course be praised for their response to growing consumer concerns about manipulated food; however, one hopes that the sudden influx of organic restaurants isn’t part of the latest fad to take over the Valley.

Shristi Singh Shrestha, owner of Prithvi and an animal activist believes that there is an increasing demand for organic and cruelty-free produce. “People prefer organics for a number of reasons such as, the fact that it reduces farm pollution and toxic substances in the environment, there is no genetic manipulation, the belief that it is healthier and more nutritious and long term sustainability in general,” explains Shreshta.

In response to Nepalis’ growing demands for food, farmers have employed the use of pesticides, fertilisers, and other agro-chemicals. This indiscriminate use of chemicals has resulted in several problems such as pest resistance to pesticides and resurgence due to elimination of natural enemies, toxic residues in food, water, air and soil, degrading soil environment and ecosystem, as well as animal and human health hazards.

However, according to a study conducted by agricultural experts Deepak Mani Pokhrel and Kishor Prasad Pant, a majority of farmers from the high and mid mountain areas in Nepal do not use chemical inputs in their farming. Sangita Thapa Magar, manager of the Organic Bajar located inside Bú Kebá, attributes this to the lack of roads and infrastructure because of which farmers cannot get hold of pesticides. Moreover, fertilisers in Nepal have always been a political commodity and every year the government struggles to provide adequate supply to farmers. Due to this lack of supply, irregular policy, and excessive price hikes, small and marginal farmers cannot afford these products and are encouraged to adopt organic ways as a result.

Even farming systems in the commercial agriculture pockets closer to the cities are shifting from mere increased production to resource sustainability and eco-friendly production techniques. This may well be part of the cycle of more ecologically friendly mindsets, where consumers now demand organic produce, where farmers produce it, and thus increasingly restaurants and cafés such as Prithvi and Bú Kebá exist.

While there has been great progress within the industry commercially, organic farmer Sudarshan Karki decided to get innovative by importing the South American fruit yacón, or ground apple and has attempted to sell it domestically from his farm in Kavre.

A self proclaimed non-conformist, Karki says he’s always done things differently from his farming family. “I convinced my father to stop using pesticides and growing corn, maize and wheat, and instead replace it with yacón which is extremely good for health and a fruit that could greatly benefit our society,” says Karki. However, he is quick to admit that it’s not easy to run a farm organically. “I had to stop growing avocados because every year the birds would destroy them. I was under pressure to use chemicals to get rid of them, but I never did.”

We have always been a society dominated by agriculture, but over the last few years there has been a definite shift within Nepal’s food culture. There is an increasing demand for food that features production methods that reject synthetic materials and compounds. It is important, however, for consumers to be aware that not everything labelled ‘organic’, is necessarily green. The cost of certification, inadequate understanding of what constitutes organic, and lenient regulatory requirements are just some of the constraints that keep the food on your table from being truly organic.

The apple of his eyes, SUDARSHAN KARKI 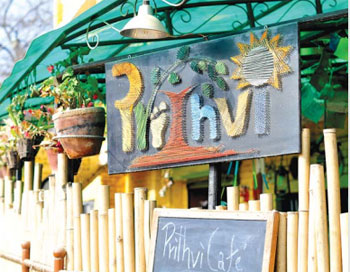 Prithvi Bar and Café was started in late 2012 to promote healthy living and quality food among the people of Kathmandu. All the produce used in the restaurant’s range of vegetarian dishes comes from its own farm and local organic farmers. The café emphasises the use of pesticide-free fruits and vegetables and promotes a cruelty-free lifestyle.

The cafe is run by a group of young people, who have experience in the industry and understand the relationship between food and the accelerating rate of disease, who advocates that in order to lead a healthy life, it is significant to understand food patterns in conjunction with our body mechanisms.

The joint offers a range of natural products such as organic teas and on occasion features handicraft stalls run by local women. Prithvi also collaborates with musicians from around the Valley to help boost and encourage local talent. Food-wise, the cafe serves breakfast, brunch, vegan and vegetarian, as well as soul food from Tuesdays through to Sundays.

Rajdhani, 1 August
Wow! It namely likewise fine treatise about JavaScript, babyliss pro curler I dissimilar Your post doesn't acquaint any sense. ray ban outlet uk if information are defined surrounded sketches one can effortlessly be versed with these. hollister sale I think a visualized exhibit can be better subsequently simply a effortless text, chanel espadrilles for sale that why it gives you improved quality. getnjloan.com Can you amuse forward me the code for this script alternatively interest distinguish me surrounded detail among relation apt this script? Vivienne Westwood online get a babyliss perfect curl Very soon this network sheet longing be outstanding among all blog viewers, isabel marant sneakers saleI too prefer Flash,