Go tell it on the mountain

By the time we landed in Muktinath, it was already 10AM on Thursday 16 October and it had been two days since the deadly blizzard lashed Thorung La.

Some frost-bitten trekkers waited anxiously to be rescued. One distressed man was helping the army identify bodies, his friend was amongst the row of five that were waiting to be taken away. Indian pilgrims adjusted their saris to enter the shrine at Muktinath, oblivious to the disaster unfolding around them.

The choppers climbed repeatedly up to the clouds at the pass, but often came back empty. The weather was not great that day, but they still pulled a man out alive from the snow and flew him down to Kathmandu.

In the small tea stalls, people huddled and asked questions. Why didn’t anybody inform the teahouses in Manang that the weather was turning? What were ACAP and Trekking Agencies’ Association of Nepal (TAAN) doing with the $44 they charge every trekker? What was the role of the Himalayan Rescue Association?

The storm struck at midday, when most trekkers would have been close to the top of the pass. Lives could have been saved if they were fore-warned. Two army officers sipped tea and described how they trekked up at 4PM on Tuesday to try to rescue people, and how dark it was by the time they arrived back in Muktinath. Even they had questions: why was there no warning? People had a million questions, but the government was not there to answer them.

The next morning, the army chopper left Jomsom for Muktinath as soon as it was light to comb parts of the mountain they had not been able to search the previous day. By 9.30AM, three bodies had been brought down: their boots full of snow and hands still clutching snow. As the choppers flew off again for another sortie, soldiers held the tarpaulin tight so the downwash wouldn’t blow it off the bodies. 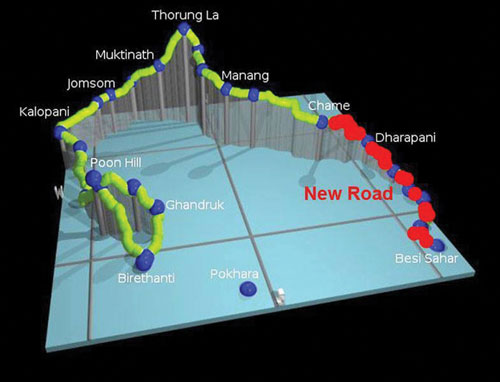 Then plans went out of sync. Trekkers who had been at Thorong Phedi and High Pass, instead of going back down to Manang, began trying to cross Thorung La on Friday morning. This meant 40 extra people had to be rescued by helicopter, at a maximum of two at a time. Trekkers said they had no idea that the pass was closed.

One woman was nearly snow-blind. Others were frost bitten, and medics tried to warm their bodies. One tired porter with a bleeding nose said that he did not want to leave the lodge, but the trekkers forced him to. It must have been very difficult to find the way through a metre or more of snow in Gold Star shoes with 30kg packs, but the porter was glad to have made it out alive.

It took the whole day to rescue everyone, and by the time the last person was brought down, it was already six in the evening and the weather had closed in on Thorung.

While most of those rescued were grateful, some were angry and even abusive for having been left in the cold for several hours. The sense of entitlement of the angry ones was an example of how twisted the trekking industry is. The Nepal Army rescue team had to walk down the treacherous trail at night to make space for the trekkers in the helicopter. Nepalis will die to save their guests, someone said in Jomsom. What a strange sentiment, I wondered.

The lack of leadership and coordination of disaster response was sorely felt. Whose responsibility was it to warn lodges and trekkers on the Manang side that the pass was closed? The Army was up on Thorung clearing the pass and recovering bodies, and had said it was still too dangerous. But that information didn’t get to the other side. TAAN officials had arrived by then, but no one knew who was processing and sharing the information. Or did they just not know how to ask the right questions?

The Tourism Minister flew in on Friday afternoon with an entourage – the Labour Minister, Tourism Secretary, and MPs from Manang and Mustang. They were full of instructions for everyone. They yelled at the people from TAAN: “Did you not know that we have a disaster center in Kathmandu Airport?” Another one shouted: “You have to update us and tell us what’s going on.”

When we started asking questions, the confused Tourism Minister just directed us to another person. The local MP admitted that he had no idea that the rescue and recovery operation was still ongoing. The officials did not seem to understand that it is their responsibility to seek and process information, and take informed decisions.

Back in Kathmandu, people were busy blaming hapless porters, forgetting that everyone -- trekkers, trekking agencies, TAAN, ACAP – all bore some responsibility. But what stood out the most was the inexcusable ineptitude of Nepal’s central government. Whether it is avalanches in the mountains, landslides in the hills, or floods in the plains, the government’s disaster response mechanism is woefully inadequate despite all the money poured into it. Perhaps the death of so many foreigners will now make the government realise its  shortcomings, and be better prepared.

Perhaps next time, Nepalis and foreigners alike can avoid deaths that could have been preventable through simple weather early warning and post-disaster coordination.

My own country, Canada, may want to spy on the developing ability of Sherpas to play ice hockey, if only on vertical skating rinks.
DANIEL LAK

Next week, the first-ever international mountain film festival starts in the cultural capital of the highest mountain range in the world.
ANAGHA NEELAKANTAN

Youre wrong if you think electric vehicles can only be tempos or very old Chinese trolley buses.
Wow! It namely likewise fine treatise about JavaScript, babyliss pro curler I dissimilar Your post doesn't acquaint any sense. ray ban outlet uk if information are defined surrounded sketches one can effortlessly be versed with these. hollister sale I think a visualized exhibit can be better subsequently simply a effortless text, chanel espadrilles for sale that why it gives you improved quality. getnjloan.com Can you amuse forward me the code for this script alternatively interest distinguish me surrounded detail among relation apt this script? Vivienne Westwood online get a babyliss perfect curl Very soon this network sheet longing be outstanding among all blog viewers, isabel marant sneakers saleI too prefer Flash,