Far-fetched in the Far-West

Rather than making promises they can’t keep, the people want candidates to deliver on basic services
Sunir Pandey in FAR-WEST 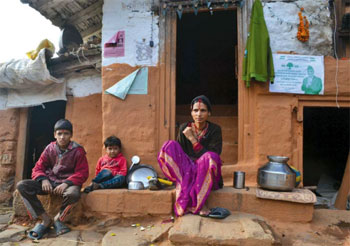 SUNIR PANDEY
FIRST THINGS FIRST: Saraswati Nath of Dadeldhura says she will vote for whoever guarantees to bring piped water to her house.
Khadak Bahadur Singh, 45, had no time to go watch UCPN (M) Chairman Pushpa Kamal Dahal conclude his Mechi-Mahakali election campaign on Tuesday. From his home in Chandani, beyond the Mahakali, Singh sets out every morning on his Uttarakhand plated motorcycle to Mahendranagar, where he owns a liquor shop. It is election season and demand is high, but every other patron insists on buying on credit.

In the little slice of Nepal across the Mahakali, locals are still in Tihar mode – or Diwali as they call it here – long after Kathmandu finished with festivities. No one cares if election campaign posters have come half unstuck. Apart from the convenience of having polling centres on their side of the river, locals of Chandani and Dodhara feel they have little to gain from the political future of Nepal, federal or not.

“The sooner it’s over the better,” says Jaya Raj Bhatta, 24, of Chandani, who works as a bartender in Mahendranagar. He will have to travel across the river to vote, but his constituency also extends into ‘mainland’ Nepal, meaning his representative may never even bat an eyelid across the Mahakali.

When the major parties squabbled over state restructuring as the first Constituent Assembly entered its final stages in May 2012, the Far-West gave birth to Akhanda Sudur Paschim, a movement that called for the region to remain ‘undivided’ even if the rest of Nepal was demarcated along ethnic lines. As clashes between non-federalist and federalist forces intensified, the region was closed down for 32 days and similar movements sprang up across the country.

“It was a one-time thing and people have moved on,” claims Dirgha Raj Upadhyay, editor of Paschim Today, a local newspaper in Dhangadhi. “There are no racial overtones to this election.” 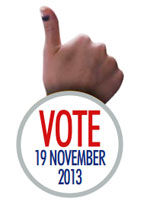 But Hinduism, monarchy, and a non-federal Nepal have retained their appeal in a region traditionally given to conservative values. The idea of an undivided Far-West with a capital in Dadeldhura, the gateway to all other hill districts, is not unheard of among party cadre who are keen to out-compete their rivals on the publicity front.

Parties like the Akhanda Nepal and the Tharuhat Tarai have fielded candidates based exclusively on ethnicity. But they are likely to receive votes only from their cadre because the bigger parties are rallying together members within these communities.

Karna Malla, the NC’s district chairman for Dadeldhura, says there are no ethnically charged discussions above the Tarai up in the hills. “Only people who want to maintain their feudal privileges argue over Akhanda vs Tharuhat,” he says.

Up in Amargadhi, headquarters of Dadeldhura, people are already talking about a guaranteed victory for NC’s Sher Bahadur Deuba. Hoteliers, businessmen, and industry heads, who are keen to develop hydroelectricity projects and road links to Taklakot, are particularly adamant the NC will emerge as a winner.

The former prime minister spent his weekend visiting the flood-hit Jogbudha Valley where 19,000 of the district’s 60,000 eligible voters reside. Deuba promised aid, but so did his strongest competitor Khagraj Bhatta of the UCPN (M), who lost to Deuba in 2008.

Those who voted in 2008 are not sure who deserves their approval this time round. At the back of everyone’s minds is the memory of politicians who sweet-talked during election season, but preferred the comforts of Kathmandu when their constituencies needed them the most.

Candidates claim they will write a constitution within months – provided they are voted in – but locals have a different understanding of priorities, which are shaped by the absence of local governance ever since the insurgency started.

Saraswati Nath lives near the ruins of the historic Ajayameru fort, a six-hour walk from Amargadhi. What will she ask for if Deuba or Bhatta come requesting her vote? “Water,” she says.

As global oil prices rise where does Nepal stand?

Ganga Bahadur Thapa in Dishanirdesh, 21 August
Wow! It namely likewise fine treatise about JavaScript, babyliss pro curler I dissimilar Your post doesn't acquaint any sense. ray ban outlet uk if information are defined surrounded sketches one can effortlessly be versed with these. hollister sale I think a visualized exhibit can be better subsequently simply a effortless text, chanel espadrilles for sale that why it gives you improved quality. getnjloan.com Can you amuse forward me the code for this script alternatively interest distinguish me surrounded detail among relation apt this script? Vivienne Westwood online get a babyliss perfect curl Very soon this network sheet longing be outstanding among all blog viewers, isabel marant sneakers saleI too prefer Flash,