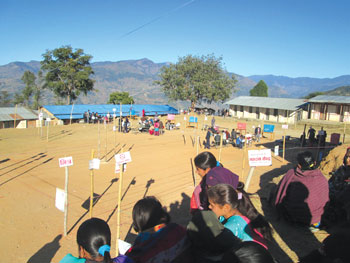 PURNA BAHADUR KHADKA
FOR OUR BETTER FUTURE: Voters line up at district headquarters of Achham in Mangalsen to cast their ballots on 19 November in the hope that government services will improve.
They had started streaming down the narrow trails not long after sunrise. The hills of Achham, bathed in golden morning light, provided a stunning backdrop to the line of men and women making their way down towards the village school.

Throughout the day they continued to come: people from all castes, young and elderly with canes, folks with disabilities. Teachers. Farmers. Midwives. All to participate in last month’s elections, defying threats of violence and overcoming disillusionment with candidates to exercise their democratic right.

Why did Nepalis in Achham and other citizens throughout the country turn out in such great numbers? After two centuries of democracy, we in the United States struggle to hit 50 per cent turnout in elections, but in Nepal the national turnout was nearly 80 per cent. Whatever the nihilism, alienation, and despair that people face on a daily basis, a majority of Nepalis seem to aspire for progress. They hope for better schools, energy and water infrastructure, and quality healthcare.

My experience as a pediatrician here at Bayalpata Hospital of Achham has shown me that parents will stop at nothing for their children’s health and future. That is why people voted: there was conviction, at a mass, national level, that voting would somehow help them and, importantly, the next generation.

Yet, historic as these elections were in and of themselves, they are unlikely to translate immediately into material benefits for voters and their families. The chasm between politics and policy, policies and implementation, and implementation and social justice, is wide. This is a generational process. Perhaps an even more critical step is to conduct local elections, the democratic exercise that ensures accountability at the grassroots.

Local elections will bring local self-governance and the decentralisation process that started in 1990 and was truncated by the conflict, a full circle. It will mark a true end to the process where district officials are beholden to central leaders rather than local people.

This is most apparent in healthcare. Nepal has some of the most progressive health policies in the world — indeed, they would be a model were it not for extreme challenges in implementation. The obstacles are largely local: can doctors and midwives be held accountable for their actions, can hospitals and health posts be managed efficiently and effectively, can the right vaccines and medicines get to patients at the right time? These challenges can be addressed by local elections, since VDC and DDC council members will be forced to be more accountable if they are elected.

As a physician, a father, and a global citizen, the images from last month’s elections for the Constituent Assembly in Achham will remain in my mind forever. The voters cast their ballots and returned along the dusty trails to their home villages, their thumbs marked not just with ink, but with pride and perseverance.

I was reminded of the great civil rights leader Martin Luther King’s convocation to social action: “The arc of the moral universe is long, but it bends toward justice.”

One and the world

Mohan Khanal-general manager Royal Nepal Airlines
Wow! It namely likewise fine treatise about JavaScript, babyliss pro curler I dissimilar Your post doesn't acquaint any sense. ray ban outlet uk if information are defined surrounded sketches one can effortlessly be versed with these. hollister sale I think a visualized exhibit can be better subsequently simply a effortless text, chanel espadrilles for sale that why it gives you improved quality. getnjloan.com Can you amuse forward me the code for this script alternatively interest distinguish me surrounded detail among relation apt this script? Vivienne Westwood online get a babyliss perfect curl Very soon this network sheet longing be outstanding among all blog viewers, isabel marant sneakers saleI too prefer Flash,