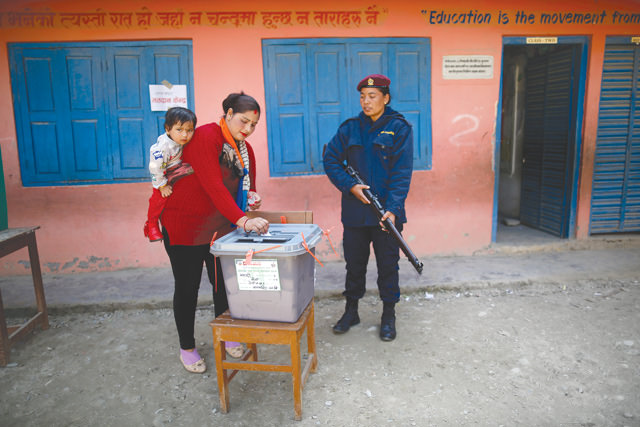 When the Maoists launched their armed struggle to topple the Nepali state in February 1996, the country had just reclaimed democracy from an autocratic monarchy.

What followed was a decade of bloodshed, and another decade of turbulent transition to a federal and secular republic.

This week, Nepal has finally ended its painfully protracted political transition by holding the last phase of parliamentary and provincial elections. Earlier this year, the first local government elections since 1997 were also held.

Nepal’s political roller coaster actually began during the conflict when a group of mainstream parliamentary parties and the underground Maoists joined hands in New Delhi to launch a non-violent pro-democracy movement in November 2005. The street protests escalated and what the Maoists couldn’t achieve with ten years of war and 17,000 deaths, was attained in 19 days of a relatively peaceful people’s movement.

But in Nepal, fighting for democracy has always been easier than making it work. A ceasefire came into effect, an interim constitution paved the way for elections and the first Constituent Assembly (CA) voted to abolish the monarchy in 2008. But the CA soon got bogged down in a polarised debate about the kind of federalism. When the second CA finally promulgated the new Constitution in September 2015, Nepal was one step closer to ending its transition.

Today, there is disagreement about whether the transition began after the abolition of the monarchy, or much longer ago – after the fall of the Rana oligarchy in 1950.

As two communist parties that have forged an electoral alliance and aim to unify themselves after polls are expected to win a majority, the hopes of most Nepalis is foremost for stability, a prerequisite for development and growth.

Two Tarai-centric parties were left out of the Constitution writing process, and they are yet to own this document wholeheartedly. They were threatening to disrupt elections in the plains until a few months ago. But they eventually took part not just in local but also parliamentary and provincial elections, which is a positive signal for a more stable future. However, there are still many unknowns. The main leaders of the parties are the same ones who stoked the flames of instability in the past, and there are still lots of issues to sort out about the new provinces. And then there is regional geopolitics, and the competing interests of India and China.

A decade after the end of their war, the Maoists have become a part of the system they wanted to overthrow. The federal Parliament for which Nepalis have voted last week and this week may have devolved some of its power to provincial assemblies, but it is still the same bourgeois system erstwhile rebels despised.

The United People’s Front, the political wing of the Maoists, had emerged as the third largest party in the first parliament under the new Constitution in 1993 with more than 350,000 votes. Three years later, when the mid-term election was held, they did not win a single seat, and only 100,000 votes. That electoral loss droved the Maoists to wage an armed struggle against the state, and they dragged the country into war. They harked back to an obsolete ideology as a crafty way to justify the violence. A radical fringe of the Maoists still doesn’t believe in parliamentary democracy and tried to disrupt this year's elections with violence.

Aside from these challenges, it is safe to assume that come January Nepal will enter a new age. Hopefully, stability will improve governance, encourage investment and allow Nepal to finally take a leap forward.

Letter to the Editor in Kantipur, 22 February

Wandering aimlessly across Nepal without a destination

KISHORE NEPAL all over NEPAL

Singha Darbar is uncharacteristically defiant towards donors
NAVIN SINGH KHADKA
Wow! It namely likewise fine treatise about JavaScript, babyliss pro curler I dissimilar Your post doesn't acquaint any sense. ray ban outlet uk if information are defined surrounded sketches one can effortlessly be versed with these. hollister sale I think a visualized exhibit can be better subsequently simply a effortless text, chanel espadrilles for sale that why it gives you improved quality. getnjloan.com Can you amuse forward me the code for this script alternatively interest distinguish me surrounded detail among relation apt this script? Vivienne Westwood online get a babyliss perfect curl Very soon this network sheet longing be outstanding among all blog viewers, isabel marant sneakers saleI too prefer Flash,