To overcome her disability, she set the most difficult task she could think of: climb the world’s highest mountain 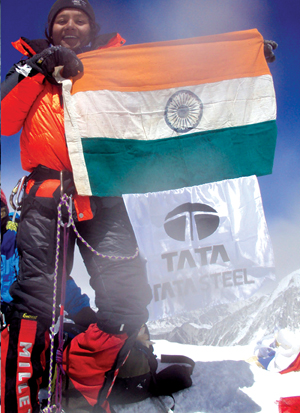 TRUE GRIT: Arunima Sinha, the first female amputee to make it to the top of Mt Everest last week
When Arunima Sinha neared the highest point in the world at 10:55 in the morning of 21 May, she let out a shriek. Her climbing partner, Nima Sherpa, thought something was wrong and rushed to her side, asking “What happened, what happened?”

Arunima turned around and with a big smile said: “I am shouting with happiness. I did it.”

It has been a long way in a very short time for Arunima from a hospital bed at AIMS in New Delhi after her left leg was amputated a year ago. This is story of a young woman who attained two Everests: one to climb the physical mountain, the other to overcome a tragic injury and strive for an impossible goal.

Arunima was a national volleyball player from the Uttar Pradesh team and was travelling on a train to Delhi when six men tried to snatch her necklace. When she resisted, they threw her out of the running train at 1AM. An incoming train ran over her left leg, and Arunima lay there between the tracks, her body broken. Other trains passed within inches of her face. She was rescued six hours later.

Surgeons amputated her left leg and replaced her right femur with a steel rod. She refused to be on crutches and turned away a wheel chair, and started immediately into physical therapy. Doctors had said she would take up to two years to be able to get up on her artificial leg, but she was walking with the help of parallel bars within two days. They can’t explain how it happened.

It was while she was recovering in her hospital bed that Arunima decided that if she was to overcome her disability, she needed to set a goal, and she gave herself the most difficult task she could think of: climb the world’s highest mountain. Her brother, Om Prakash, encouraged her and soon she was making what doctors called a “miraculous” recovery.

Arunima at a climbing wall with her prosthetic leg and with her mentor India’s first Everest sumiteer Bachindri Pal.

“Everyone would come to hospital and console me saying ‘bichara’,” Arunima said in Hindi, “I decided I would not be a ‘poor thing’ and set an example for others like me.”

Arunima’s inspirations were cricketer Yuvaraj Singh, who successfully battled cancer and Bachindri Pal, the first Indian woman to climb Everest in 1984, who encouraged her and lined up a sponsorship from the Adventure Foundation of Tata Steel. Arunima had always idolised Pal and felt honoured to have a mentor like her as she trained in the Garwhal Himalaya, climbing many of the peaks there.

Finally, after also climbing Island Peak in Nepal, she was confident enough to join up with the EcoEverest 2013 Expedition with six other Indian members. When more than 500 climbers get to the top within one week, is Everest still a challenge, we ask her.

“People think Everest is easy, it’s not,” she replied, “the vertical Lhotse Face and the Hillary Step are the hardest things I have ever done. The crampons work well on ice, but they scrape and slip on the rock, one small mistake and you either fall into China or down to Camp II.”

Arunima had the stamina, but her endurance was also tested to the limits. Because she was slower than others, it took her 26 hours of continuous climbing to get from the South Col to the summit and back. Once, near the South Summit Arunima slipped and was saved because she was hooked to the fixed rope with her carabiner.

Finally, when she saw the top, Arunima had to suppress a strong urge to run to it. “The view from the top is the most beautiful thing I have ever seen, we were above the clouds, the others peaks looked so small and far below,” she recalled.

Arunima is now working on a plan to build a sports academy for underprivileged children in the town of Unnao in Uttar Pradesh. She has got the land, but there is no money for the facility yet. She hopes the publicity about her climb will help her in fund-raising.

Arunima adjusted her prosthetic leg as she prepared to leave for the Nepal government’s reception for Everest Sumiteers at the Naryanhiti Museum on Wednesday, and said: “Everyone has Everests in their lives, but however impossible it may look no goal is insurmountable. You just need to believe in yourself.”

Grievances are adding up against some ad agencies
ASHUTOSH TIWARI

"No such place as Madhes"

Kantipur, 15 July
Wow! It namely likewise fine treatise about JavaScript, babyliss pro curler I dissimilar Your post doesn't acquaint any sense. ray ban outlet uk if information are defined surrounded sketches one can effortlessly be versed with these. hollister sale I think a visualized exhibit can be better subsequently simply a effortless text, chanel espadrilles for sale that why it gives you improved quality. getnjloan.com Can you amuse forward me the code for this script alternatively interest distinguish me surrounded detail among relation apt this script? Vivienne Westwood online get a babyliss perfect curl Very soon this network sheet longing be outstanding among all blog viewers, isabel marant sneakers saleI too prefer Flash,