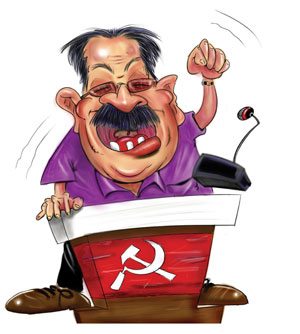 DIWAKAR CHETTRI
The UCPN (Maoist)’s decision to appoint a controversial figure as a Constituent Assembly (CA) member has angered its Madhesi allies, potentially weakening the hope for a strong anti-government movement in the Madhes.

Two days after the Maoists named Lahr Kyal Lama as a CA member, an influential Maoist from the Tarai, Prabhu Sah, came down heavily on his own party accusing it of forging signatures of central committee members to appoint a “rich but tainted” person as a CA member in a quota meant for a Madhesi-Dalit.

“Let alone seeking our consent, the party leadership did not even inform us about it,” said Sah. “They must correct this decision.”

Lama was appointed to a post that was lying vacant after Shambhu Paswan’s CA membership was scrapped because it was found he was holding another position. Lama was formerly with the Nepali Congress, and chaired the Monastery Management Committee. He then defected and was even appointed State Minister for Finance by a UML government, but had to step down after it was found that he simultaneously held a Nepali citizenship certificate, a Tibetan identity card and an Indian passport.

“By naming a tainted person like Lama for a CA post meant for a Madhesi-Dalit, our party has made mockery of its own commitment to the poor, Madhesi and Dalits,” said Sah. “It will also have a negative impact on our movement.”

After Sah stood against his party’s decision, the UCPN (Maoist) went into damage control mode on Tuesday and issued a press statement defending its decision to recommend Lama as a CA member. Spokesperson Dinanath Sharma said Lama was an “expert” and representative of the minority Buddhist community.  This seems to have added fuel to the fire because Lama’s controversial past is a matter of public knowledge.

Analysts say Sah’s criticism of Lama’s appointment could reverberate across the Madhes, which is where the UCPN (M) is expecting to see the strongest street agitation about the constitution.

After Mohan Baidya’s split, the UCPN (M) does not hold as much influence in the hills as it used to in the past. Baidya’s CPN-Maoist and Netra Bikram Chanda’s breakaway faction have more cadre in leadership roles than the UCPN (M). This is why Pushpa Kamal Dahal has come to rely heavily on support from the Madhesi Front for his anti-government movement.

The Maoist-Madhesi alliance's announcement of street movement is intended to put pressure on the ruling NC-UML coalition to call off its vote in the CA on the constitution and acquiesce to the demand for consensus.

But with fissures within the Madhesi Front and the fallout of the Lama appointment, the movement has been weakened even before it started.

The biggest blow is Sah’s assertion that his own party is “anti-Madhesi”.

Sah and Poudel both are close to Maoist second-man Baburam Bhattarai, and his criticism of the Lama appointment may also have something to do with the internal power dynamics between Chairman Dahal and Bhattarai.

Added up, all this could be why Dahal this week softened his tone, asking Prime Minister Sushil Koirala to send him another invitation letter for talks.

The east is red

A firsthand account of the insurgency from Sankhuwasabha district.
MOHAN MAINALI in KHANDBARI

375 mouths and handfuls of raw rice

Comment by Kishore Shrestha in a column called "Note of Dissent" in his newspaper, Jana Astha, 30 October.
Wow! It namely likewise fine treatise about JavaScript, babyliss pro curler I dissimilar Your post doesn't acquaint any sense. ray ban outlet uk if information are defined surrounded sketches one can effortlessly be versed with these. hollister sale I think a visualized exhibit can be better subsequently simply a effortless text, chanel espadrilles for sale that why it gives you improved quality. getnjloan.com Can you amuse forward me the code for this script alternatively interest distinguish me surrounded detail among relation apt this script? Vivienne Westwood online get a babyliss perfect curl Very soon this network sheet longing be outstanding among all blog viewers, isabel marant sneakers saleI too prefer Flash,