Despite the challenges, women broadcasters are making their presence felt on the airwaves
Hari Devi Rokaya 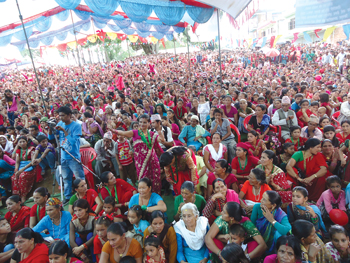 RADIO DIDI BAHINI
ON THE SAME FREQUENCY: Women who make up majority of Radio Didi Bahini’s audience at an International Women’s Day program organised by the radio in Parwat in March.
When Kalpana Chapagain of Radio Didi Bahini and Khem Kumari Pokhrel of Radio Mukti won the National Media Award three weeks ago, they joined a small but illustrious group of female broadcasters in the country.

Out of the 200 community radio stations in Nepal, there are five run by women: three in the Tarai (Biratnagar, Udaypur, and Butwal) and two others in Parbat and Jumla. Radio Purwanchal in Biratnagar and Radio Mukti in Butwal were two of the first women-run stations. While Radio Purwanchal allows men to sit on its management committee, Mukti is entirely headed by women.

“People were very condescending in the beginning, they made fun of us, but the situation has definitely improved over the years,” said Chapagain at the award ceremony.

Working in radio, women get to be both knowledge producers and disseminators and lead discussions on difficult topics like domestic violence. Female listeners also seem to feel greater connection with their sisters on radio. But despite making major inroads on the airwave, surviving in a male-dominated workplace is still the biggest challenge. 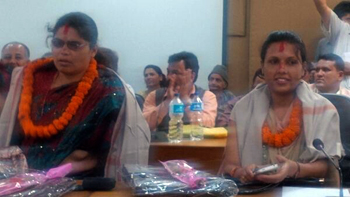 KUNDA DIXIT
Kalpana Chapagain (left) of Radio Didi Bahini and Khem Kumari Pokhrel (right) of Radio Mukti are conferred the National Media Award.
“It is remarkable to find women-run radio stations in parts of Nepal where females are still treated like second class citizens,” says Raghu Mainali, former station manager of Radio Sagarmatha, the first community-run radio station in South Asia. “And it is equally impressive to find that women have won the trust of their audience despite the ridicule they faced in the early days.”

At a time when radios across Nepal are struggling to survive because of falling revenues and crippling power cuts, these female broadcasters find themselves at a double disadvantage.

“Through community radio we are increasing women’s access to information and empowering them,” explained Khem Kumari. “Unfortunately, advertisers still don’t have complete faith in our abilities.”

Community radios have been lobbying for the state to treat them like a public service and reduce royalty, taxes, and renewal fees. They argue that in the absence of clear policies on FM radio, the government is granting licences to groups that function as mouthpieces for political parties and the FM spectrum is getting crowded in many regions.

Chapagain and Pokharel, who received Rs 200,000 cash prize each for their contribution to broadcasting, hope their achievements will help motivate and inspire other women journalists to keep working hard despite the hurdles.