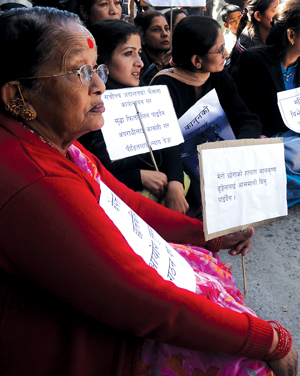 BIKRAM RAI
The commitment to form a Truth and Reconciliation Commission (TRC) was part of Nepal’s 2006 Comprehensive Peace Accord. But more than six years later and in the absence of a legislative-constituent assembly, the so-called TRC Ordinance was signed by President Ram Baran Yadav in March amidst controversy.

Most problematic in the ordinance is a legal provision allowing the commission to recommend amnesty for perpetrators of conflict-era human rights violations. In turn, the donor community has expressed its reluctance to support a TRC that does not meet international standards. Nepali conflict victims and human right activists have also challenged the TRC ordinance on similar grounds in the Supreme Court.

Responding to the petitions, the Chairman of the Interim Electoral Government and Chief Justice stressed that amnesty will not be recommended without perpetrators fully confessing to conflict-era violations and establishing a basis for pardon. While well meant and constructive, both criticism and response focus on an individual or personal level of agency that is to be intermediated by the TRC.

Further, despite its critical public importance, the ordinance was finalised and approved by only four of Nepal’s political parties, with even officials of the National Human Right Commission claiming to have been denied access to the ordinance’s final version. These and other TRC-related steps illustrate a somewhat circumscribed and politically expedient understanding of the fundamental purpose of a TRC.

How has a reconciliation-oriented mechanism managed, even prior to its inception, to cause such deep disagreements, frustrations, and tensions? Is something missing in the understanding and discussion of Nepal’s transition through truth and reconciliation? As the amnesty debate continues to sputter, broader questions regarding Nepal’s transitional processes need to be asked.

Could a TRC alone enable truths to emerge? A TRC provides the opportunity to establish a wider form of truth, one that emerges from a broad engagement of a society trying to better understand its past and reshape its future. South Africa’s TRC called this a ‘societal’ or ‘dialogue’ truth.

However, the mere establishment of a TRC is unlikely to foster, by itself, an environment conducive for such truths to emerge. First, the creation of a safe and open space for stories to be told and the installment of strong social-support mechanisms for those who shared their stories, a necessary part of this process, were yet to be discussed. Second, deepening frustration among conflict victims regarding their limited participation in the formation processes of the current ordinance might further shape and reduce their future engagement with the TRC.

Furthermore, as conflict victims object to amnesty, they are stating that the truth produced by TRC cannot replace the different and additional truth established in court, one of individual’s legal responsibilities vis-à-vis conflict-era crimes.

The question is not only whether amnesties could be granted if or when the victim is willing, but also how public participation can be fostered in the process, how Nepal’s legal system can be strengthened for effective conflict-era prosecutions, how the claims of victims regarding hundreds of conflict-era proceedings (which have been withdrawn) can be addressed, and how to ensure legal and judicial impartiality. Finally, although TRCs aim to foster reconciliation, they also conceal an inherent risk of becoming a source of additional mistrust and disagreement. Nepal’s envisaged TRC will have to constantly work to transcend existing inequalities and injustices and ensure access, participation, and voice to diverse individuals and communities.

For a longer version of this piece click here

Nepal Samacharpatra, 27 January
Wow! It namely likewise fine treatise about JavaScript, babyliss pro curler I dissimilar Your post doesn't acquaint any sense. ray ban outlet uk if information are defined surrounded sketches one can effortlessly be versed with these. hollister sale I think a visualized exhibit can be better subsequently simply a effortless text, chanel espadrilles for sale that why it gives you improved quality. getnjloan.com Can you amuse forward me the code for this script alternatively interest distinguish me surrounded detail among relation apt this script? Vivienne Westwood online get a babyliss perfect curl Very soon this network sheet longing be outstanding among all blog viewers, isabel marant sneakers saleI too prefer Flash,