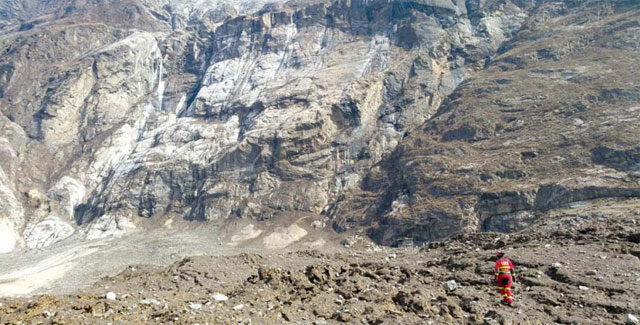 Pasang Dindup was preparing lunch for trekkers in his lodge in Langtang on 25 April when the house started shaking. There was a tremendous roar and the next thing Pasang knew, he was lying on a slope with a terrible pain in his arm.

He had been blown off by the shock wave that preceded a massive avalanche triggered by the earthquake that destroyed this scenic trekking town, killing 175, and at least 150 outsiders inclduing tourists and Nepali workers. Dindup lost his wife, and four trekkers in his lodge were also killed. Her body, as with most of Langtang’s victims was never found. 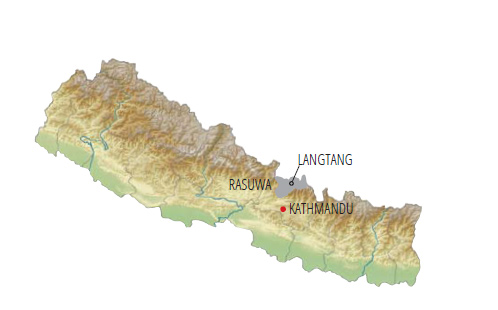 Tashi Tsering also lost his wife and his 4-year-old daughter and everyone on his wife’s side of the family. Tashi was on the balcony of his house with his mother when the earthquake hit, and jumped off. But his trekking lodge, his main means of livelihood is gone.

Pasang Gyalbhu was at a friend’s place with his son when the earthquake hit. He and his son ran for their lives, but were hit by the avalanche. They only survived because they hid behind a rock. He ran back to the house and dug his wife out of the snow, alive.

Dawa Gyalbo was returning from Kathmandu after dropping his son at school and had reached Trishuli when the earthquake hit. Worried about his family, he walked till Dhunche and hitched a ride in an Army helicopter. What he saw there was apocalyptic: bodies everywhere, including of two little girls hugging each other. His mother was killed, but his wife and daughter survived miraculously. He collected the dead, including body parts and cremated them. 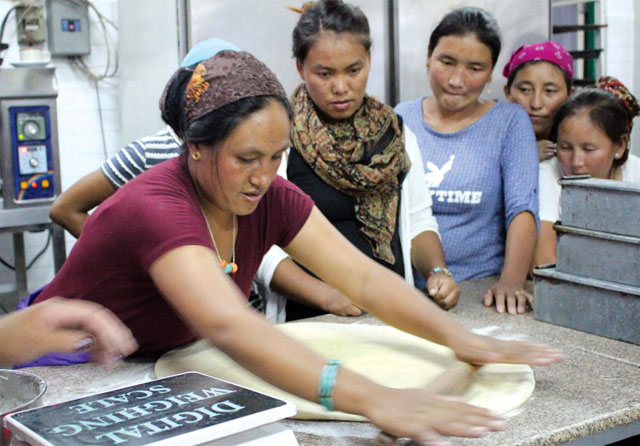 Survivors are trained in baking at the NATHM in Kathmandu last week. Pics: Upasana Khadka

Many Langtang survivors like Dawa, Pasang and Tashi recently completed Trekking Guide Training and Lodge Management Training Courses at the Nepal Academy of Tourism and Hospitality Management (NATHM) in Rabi Bhavan. It is an initiative of Harvard Kennedy School Nepal Fund, Rasuwa Relief and tourism Cares to ensure that despite their tragic loss, the people of Langtang can build back their tourism industry and livelihoods. They will all get Porter/Guide and Lodge licenses and Lodge Management Certificates which will increase their job prospects. 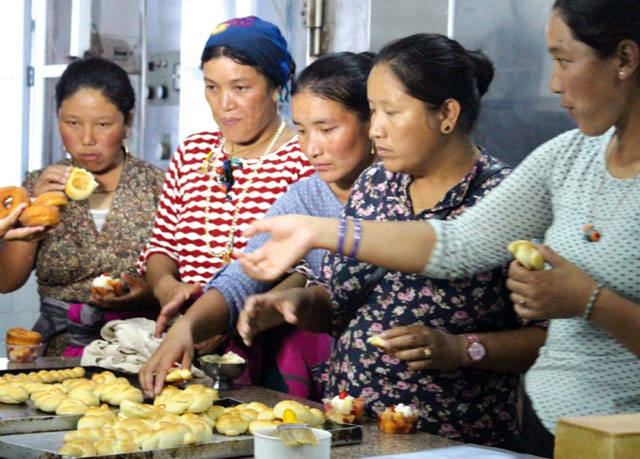 With help from Sustainable Steps Nepal women are also being trained to make thand-knitted woolen products which are for sale at the Yellow Gumba camp, since there are no trekkers on the Langtang Trail this season.

The training has also been helpful because many of the survivors lost immediate family members and have been living in a camp in Kathmandu’s unfamiliar surroundings. Many are still having nightmares.

“One night, at 11 pm I heard a roar that woke me up. I thought it was another landslide, and ran out dragging my wife and two children,” recalls Pasang Gyalbhu. “In my sleep I had forgotten I was in Kathmandu and the sound was of a plane taking off.”

Many want to go back to Langtang, and some have indeed returned to take care of their yaks in high pasture. Some like Tashi Tsering also dread going back because of the memories that it will bring back. “Here we are all busy with the course and taking care of the camp community. However, I am scared of going back and not being able to cope with the absence of my wife and daughter. That is when the pain will really sink in.”

In many regions in Nepal, people recognise that the effects of the earthquake could have been worse: had it been at a different time of the day and not late morning, had it been on a different day and not a Saturday. But not in Langtang which would have lost all no matter what day of the week it was.

Hidden under that mountain of debris that engulfed everything Langtangpas owned lies their homes and possessions, including their documents and identity cards. Many will have to rebuild from scratch. The survivors have built solidarity and a sense of community through social networking sites, posting and sharing old photographs. 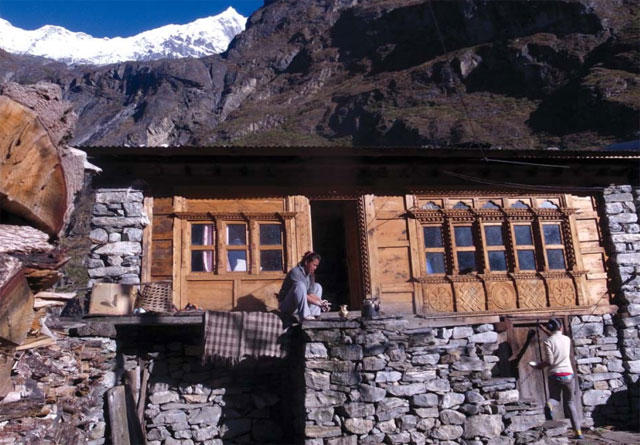 Now that the rains are tapering off, some from Yellow Gumba have gone to the Langtang Trail to repair mani walls and chortens, to recover property from destroyed homes and to cut grass for yaks in winter. But it will take longer to repair homes and lodges which will start in Spring 2016. The media interest on Nepal’s earthquake is waning, but the journey is just beginning for Langtangpas.

Says Lakpa Jangba of the Langtang Management and Reconstruction Committee: “We are investing in producing skilled manpower for the future reconstruction. There is tremendous cooperation within the community and help from outside. We have government help for bridges and trails, we need help to rebuild our homes.”

While trekking in Langtang itself is unlikely to start right away, prospective trekkers with skills such as masonry, carpentry, plumbing and electric wiring that could be useful for reconstruction can make trekking plans for Nepal for 2016. Be a part of Langtang’s reconstruction process. The Langtang Management and Reconstruction Committee is promoting voluntourism for Spring 2016.

For Langtang Handicrafts at Yellow Gumba:

The government and the diesel lobby are afraid EVs will transform the way Nepalis transport themselves.
ADAM FRIEDENSOHN

Why are roads bad in Sanepa and good in Dharan?
ASHUTOSH TIWARI

An old South Asia hand turns to peace journalism.
DANIEL LAK
Wow! It namely likewise fine treatise about JavaScript, babyliss pro curler I dissimilar Your post doesn't acquaint any sense. ray ban outlet uk if information are defined surrounded sketches one can effortlessly be versed with these. hollister sale I think a visualized exhibit can be better subsequently simply a effortless text, chanel espadrilles for sale that why it gives you improved quality. getnjloan.com Can you amuse forward me the code for this script alternatively interest distinguish me surrounded detail among relation apt this script? Vivienne Westwood online get a babyliss perfect curl Very soon this network sheet longing be outstanding among all blog viewers, isabel marant sneakers saleI too prefer Flash,