"I still call him everyday" 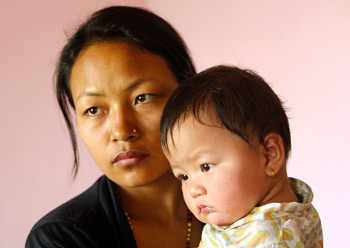 BIKRAM RAI
Menuka Gurung had just put her ten-month-old son (right) to sleep last Friday, 18 April, when she started receiving the first of many calls from frantic relatives about an avalanche on Mt Everest.

She knew her husband Ash Bahadur Gurung was in the group of climbers who had left Base Camp that morning. By the time Menuka turned on the news, there were reports of several deaths.

“I tried calling him several times, hoping and praying he wasn’t one of them, ” Menuka told us in her two room apartment near Thamel. “We spoke last on Thursday night, he used to call whenever he was away.”

Ash Bahadur Gurung, Pemba Tenji Sherpa and Tenzing Chhotar Sherpa are still buried under the ice and snow, and one week after the avalanche hopes are fading to get them out alive. Gurung’s parents arrived in Kathmandu from Gorkha on Saturday after a relative told them that their eldest son’s body was brought in the capital. 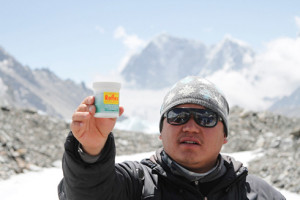 It was only after they got to Kathmandu that they learned their son was still missing. “How will we console ourselves without seeing knowing what happened to our son,” Samati Gurung asked, eyes brimming with tears. “There is still some hope that our son will come back.”

Gurung, 28, was a veteran climber and had a many friends in international mountaineering circles. Ed Marzac, an American climber recalled how his life had been saved by Ash Bahadur Gurung on an earlier climb of Yala Peak. Gurung was Marzac’s guide on Everest this season. Marzac has started an online fundraiser to help Gurung’s family and to support the Nepalis on Everest who will not be able to work.

After an earlier unsuccessful attempt on Mt Everest, Gurung wanted to make it to the top this time and then go abroad for better opportunities. Menuka is visibly distraught, but tries to put on a brave face before their five-year-old daughter. She says: “They say the rescue has been halted, but I still call  him everyday hoping he will pick up his phone and speak to me again.”