“New homes have to be safer”

In 2014, Ambassador Walton Alfonso Webson became permanent representative of the Caribbean island nation of Antigua and Barbuda to the United Nations. Earlier this month, as president of the executive board of UNICEF, he led a 28-member delegation of board members of six UN agencies to Nepal.

Travel is a central feature of the diplomat’s life. Prior to arriving in Kathmandu he visited South Africa and Lesotho, and once on the ground in Nepal he and his colleagues split into four groups, in nine days visiting nine districts. The fact-finding mission discussed priorities with women, children and youth, and local authorities.

Recovery and rebuilding from the 2015 earthquakes was a central theme, as Webson pointed out in a video chat with Nepali Times. Excerpts: 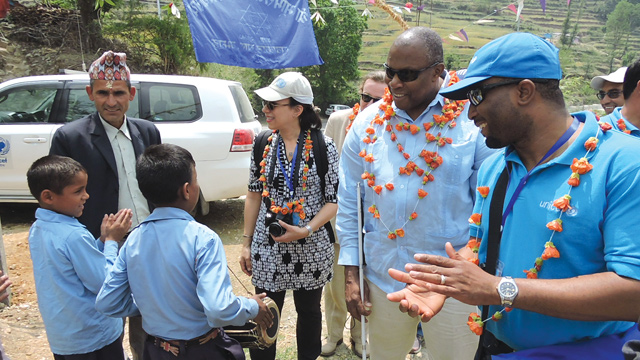 Nepali Times: Overall, how would you assess recovery from the earthquake and the UN’s role in it?

Walton Alfonso Webson: I am sure there are still lots of complaints on the ground, because our human nature is we want to see things happening, and once things begin to happen you want to see them happen faster … We certainly heard great need for reconstruction so that people in the areas that were hit hardest can get access to water faster and more reliably.

We certainly know that there is need in terms of housing but we also saw the efforts that were being made to rebuild. There are two forms of reconstruction that one always has to take into consideration in a disaster: one is social reconstruction – people who are looking at rebuilding their lives… That social reconstruction is very important and United Nations programs are focusing a lot on that.

Then of course you have the physical reconstruction: buildings, bridges, homes, etc. There’s a lot of emphasis and efforts being put into the rebuilding of homes.

What role can the UN play in trying to accelerate the rebuilding?

We had very good meetings with representatives of the government: the prime minister, minister of foreign affairs, and with the National Reconstruction Authority. We did speak about the need for hastening and they emphasised, the NRA in particular, the need to rebuild homes … UN teams will continue to work with different groups and development partners because this is a process that is not done solely by any one body.

We believe that there will be a response but, again, this is a government-led initiative and the UN is supporting the government and will continue to urge the government to move things along as quickly as possible. But you also want to ensure that the new buildings, the new homes, are built within code so that if a future earthquake comes – as is predicted – there will be better stability and less loss of lives.

How will rumoured funding cuts from the Trump administration to agencies like UNFPA affect Nepal in particular?

The UN has a really good relationship with the United States government, which is a major partner of the UN. As you said, it’s rumours. There have been discussions about UNFPA, but nothing is yet approved. It should not affect Nepal’s work in any way at this stage … So I wouldn’t be worried. We in the programs, at this moment, are not worried.

Back at the epicenter, Shankar Dahal

Ive never felt more dull-witted and uncreative than in a Nepali January. But there has been a ray of light, if not warmth, from the book Guns, Germs and Steel by the American scientist, Jared Diamond.
DANIEL LAK

Indigenous groups in Nepal are teaching their communities
HEMLATA RAI
Wow! It namely likewise fine treatise about JavaScript, babyliss pro curler I dissimilar Your post doesn't acquaint any sense. ray ban outlet uk if information are defined surrounded sketches one can effortlessly be versed with these. hollister sale I think a visualized exhibit can be better subsequently simply a effortless text, chanel espadrilles for sale that why it gives you improved quality. getnjloan.com Can you amuse forward me the code for this script alternatively interest distinguish me surrounded detail among relation apt this script? Vivienne Westwood online get a babyliss perfect curl Very soon this network sheet longing be outstanding among all blog viewers, isabel marant sneakers saleI too prefer Flash,