“It is a win-win-win situation” 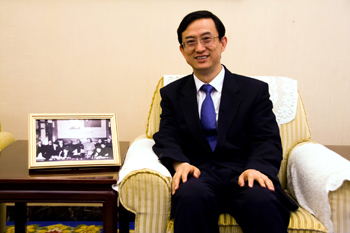 CINDREY LIU
Nepali Times: Chinese investment in Nepal is growing dramatically, what could be done to increase it even further?

Wu Chuntain: According to the statistical data from Department of Industry, Nepal has attracted more than $100 million investment from China and Chinese entrepreneurs have established more than 500 local companies in Nepal. In order to boost Chinese investment in Nepal, we suggest that the BIPPA (Bilateral Investment Promotion and Protection Agreement) be signed by the governments of Nepal and China which will significantly enhance our bilateral economic relationship. In addition, the PDA (Project Development Agreement) is vital for Chinese investment in hydropower projects, which is needed for the Chinese investors to finance adequate funding to develop the projects.

What are the main areas of investment that Chinese companies are attracted by in Nepal?

And what would you say are the main obstacles they face for further growth in investment?

Bilateral trade has also been growing, but it is a bit one-sided. What prospects do you see for balancing Nepal-China trade?

The bilateral trade between China and Nepal has been developing steadily and continuously for many years. The total bilateral trade volume in 2012 reached nearly $2 billion, increasing by 67 per cent, and Chinese imports from Nepal went up by 112.9 per cent, which is the highest rate of increase among South Asian countries. The Chinese government has provided several policies and measures to promote bilateral trade, including duty-free privilege to 95 per cent of total tariff lines as a follow-up to the 60 per cent facility which will be implemented. The Tatopani Dry Port being built under a Chinese grant is under construction and will help Nepal improve its trade facilitation services. All these efforts will draw an optimistic picture of the bilateral trade development between China and Nepal.

Which specific infrastructure and energy projects is China looking at being involved with in Nepal in future?

We are extending the Kathmandu Ring Road and constructing the dry port in Tatopani, that I mentioned before, with grant assistance. We are also building the Upper Trisuli-3A hydro power project with concessional loans, preparing the construction of Pokhara International Airport and discussing other potential projects with Nepal government. From the private sector, Chinese investors are looking for different kinds of projects in hydropower and other infrastructure areas. Some are under evaluation process. Sinohydro is constructing the Upper Marsyandi, a joint venture with a local company under build-operate-transfer (BOT) model. The China International Water and Electric Corp (CWE) is also investing in the Upper Modi hydropower project.

How realistic is the trade and transit potential for Nepal to benefit from its location between India and China?

Both India and China are neighbours of Nepal, India is Nepal’s largest trading partner while China is the second largest trading partner. It is through Nepal that some trade activities between China and India happen, like some Indian importers purchase Chinese products through Tatopani in Nepal. It is believed that Nepal has immense opportunities to benefit from its location between the two huge economies. The improvement of north-to-south transportation infrastructure between Chinese dry ports and Indian dry ports through highways, even railways, through Nepal, will provide great help.

What possibilities are there for tri-lateral cooperation between China, India and Nepal?

Nepal has large potential in hydropower, tourism and infrastructure areas. It offers a good cooperative platform for investors from different countries, including China and India, to boost the Nepali economy. The Chinese government encourages Chinese investors to cooperate with partners from Nepal as well as India. It is also well known by private sector companies that there is a huge potential for benefits from tri-lateral cooperation. We think it is a win-win-win situation.

Glued to the streets

Sanjeev Roy-Director for the region of French-based Euro RSCG

Voice of the people

A television program shows that Nepalis still have the courage to speak up. The nation listens.
KISHORE NEPAL
Wow! It namely likewise fine treatise about JavaScript, babyliss pro curler I dissimilar Your post doesn't acquaint any sense. ray ban outlet uk if information are defined surrounded sketches one can effortlessly be versed with these. hollister sale I think a visualized exhibit can be better subsequently simply a effortless text, chanel espadrilles for sale that why it gives you improved quality. getnjloan.com Can you amuse forward me the code for this script alternatively interest distinguish me surrounded detail among relation apt this script? Vivienne Westwood online get a babyliss perfect curl Very soon this network sheet longing be outstanding among all blog viewers, isabel marant sneakers saleI too prefer Flash,