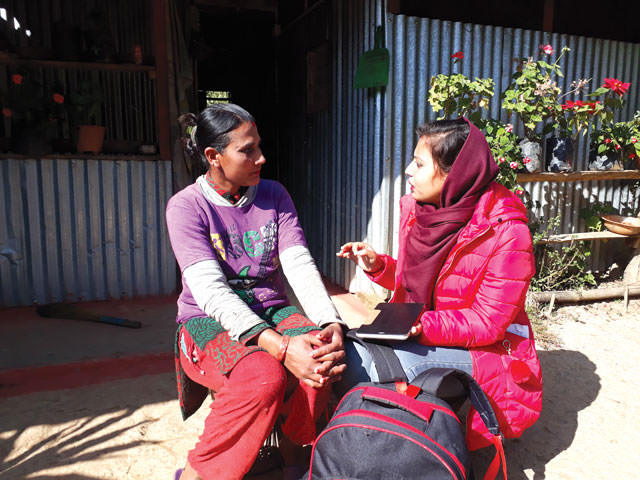 A decade after Nepal was declared a federal republic, most Nepalis still do not know what federalism means and how it will work.

This is one of the most startling revelations from the latest Himalmedia Public Opinion Survey, which has been conducted almost yearly since 2004.

The 3,612 respondents interviewed last week in 36 districts were selected to reflect Nepal’s demographic and geographical diversity. Of them, 41% chose the option ‘have no idea’ about federalism. An additional 13% replied ‘don’t know’, increasing the combined figure of those who were unaware to 54%.

Disaggregated from the literacy levels of respondents, the responses showed that even the educated did not understand federalism. While 73% of respondents who could not read or write said they didn’t understand the concept, 56% of the literate/educated were also uncertain.

Even in Province 2, the base of two Madhes-centric federalist parties that have been waging a struggle for regional autonomy, 59% of respondents said they had no idea what federalism was supposed to do. Ignorance about the concept is at comparable levels in the Tarai, hills and mountains, in the various development regions and across caste/ethnic groups.

Only 9% of respondents understood federalism as ‘the best form of decentralisation’. The option ‘a system where people govern themselves’ got 14%, ‘public service delivery at the doorstep’ was chosen by 7% and ‘equitable development’ was the option of 10%. In all, 40% of respondents seemed to have some basic idea about the concept.

Since Nepal adopted federalism in May 2008, this new form of governance has been a divisive topic – deadlocking the first constituent assembly over whether it should be defined and named along ethnic lines, by dividing the country north-south, or whether the entire Tarai should be one province. Even after the main political parties came to agreement on federalism, fringe parties and some opinion makers have been sceptical about its viability. 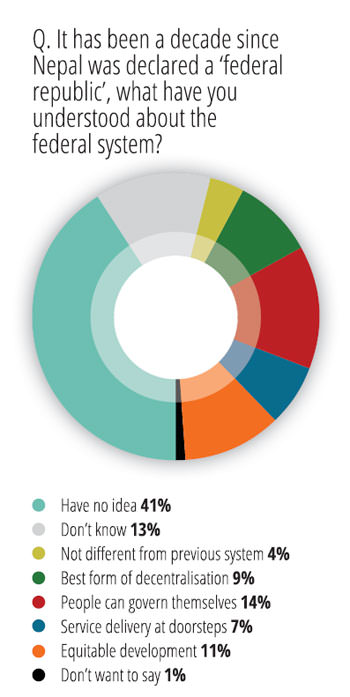 This survey result is surprising also because of its timing, coming as it does when federalism has finally taken shape after a decade of tumultuous transition. The federal Parliament and state assemblies were recently elected, while municipal and village councils have been functioning for seven months.

Do most Nepalis really not understand federalism, or is it just their disenchantment with an expensive system under which 990 MPs and up to 135 ministers will be enjoying the perks of new offices? Sociologist Chaitanya Mishra thinks survey respondents may have heard of federalism, but don’t really understand what it means for them.

“Federalism has been just an agenda for politicians and activists, but neither its supporters nor its detractors have explained why it is important to people,” reasons Mishra.

Political analyst Surendra Labh, in Janakpur, agrees: “The same urban-centric group of opinion makers has always been at the centre of Nepal’s federalism debate, and ordinary people were never included.”

Into an era of uncertain stability

"Politicians are not gods"

Excerpts of Bhushan Dahals interview with Sher Bahadur Deuba on Fireside, Kantipur Television, August 14
Wow! It namely likewise fine treatise about JavaScript, babyliss pro curler I dissimilar Your post doesn't acquaint any sense. ray ban outlet uk if information are defined surrounded sketches one can effortlessly be versed with these. hollister sale I think a visualized exhibit can be better subsequently simply a effortless text, chanel espadrilles for sale that why it gives you improved quality. getnjloan.com Can you amuse forward me the code for this script alternatively interest distinguish me surrounded detail among relation apt this script? Vivienne Westwood online get a babyliss perfect curl Very soon this network sheet longing be outstanding among all blog viewers, isabel marant sneakers saleI too prefer Flash,