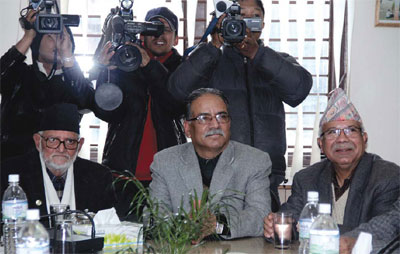 DEVAKI BISTA
More than one month after the elections were held and results announced, Nepal’s political parties are still trying to agree on powersharing. After the unnecessary delay, Tuesday’s four-point deal finally paved the way for the defeated UCPN (Maoists) to join the Constituent Assembly. But hurdles remain.

The checklist for 2014 include the following:

** Each party overcome fierce internal pressure to finalise the PR list by the thrice-extended 30 December deadline.

** Interim Electoral Council finalises 26 names for the nominated list in the CA.

** The cabinet will have to consult the political forces, but should not be dictated by them in finalising the list.

** Once the 601-strong membership of the new House is finalised, it elects a prime minister and the president orders the Constituent Assembly to convene.

** A new government is set up to take the country forward and revive stalled development.

** Get all party agreement to conduct local elections by April 2014.   This roadmap may appear straightforward, but is fraught with pitfalls every step of the way. Tuesday’s four-point deal may have been needed to break the deadlock, but is an inherently undemocratic exercise that allows a group of elderly men (above) to bypass an elected legislature.

The PR mechanism was also designed to make the Constituent Assembly representative, but has been hijacked by the main parties who tend to nominate members to appease internal factions. Political parties have retreated to hotel resorts to finalise their PR lists over the weekend.

There are many geo-political uses for an overseas development aid budget.
DANIEL LAK

But for how much longer?
BINOD BHATTARAI
Wow! It namely likewise fine treatise about JavaScript, babyliss pro curler I dissimilar Your post doesn't acquaint any sense. ray ban outlet uk if information are defined surrounded sketches one can effortlessly be versed with these. hollister sale I think a visualized exhibit can be better subsequently simply a effortless text, chanel espadrilles for sale that why it gives you improved quality. getnjloan.com Can you amuse forward me the code for this script alternatively interest distinguish me surrounded detail among relation apt this script? Vivienne Westwood online get a babyliss perfect curl Very soon this network sheet longing be outstanding among all blog viewers, isabel marant sneakers saleI too prefer Flash,