No Prachanda, no constitution 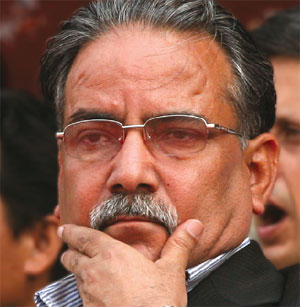 My father was branded a traitor by Maoist rebels during the war. His life was threatened and he was forced to leave the village. The Maoists also tortured my brother repeatedly on false allegations. I resent the Maoists for all the suffering they brought upon my family. And I know there are many others who feel the same. But as a level-headed person, I don’t agree with the NC and UML’s decision to sideline the Maoists from the constitution-writing process. Despite performing poorly in the CA2 elections, the UCPN(M) is still the third largest party. The fact that the ruling government had to appease the Maoist leader Prachanda who lost in the elections also speaks of his influence. Prachanda is one of my favourite political leaders, and I appreciate Girja Prasad Koirala’s efforts to bring him into mainstream politics. Drafting a constitution by pushing him aside is not wise. Even if it is promulgated, a constitution which is not based on consensus will not last long.

Nepal’s political stagnancy can only end when the contentious issues are addressed. A logical conclusion is possible only with Prachanda’s participation. Keeping him out could invite a new conflict which will breed more extremists like Raut and Biplab. It is in everybody’s best interest if the peace process is concluded by writing the new constitution by including opposition voices.